The 100-degree heat didn’t stop 30 neighbors from congregating in a cul-de-sac in East Fort Worth on a recent afternoon to grouse about a maddening nuisance in their midst.

A vacation didn’t prevent a city official from meeting with those residents to answer their questions. Planning and Development Assistant Director David Hall had spent months trying to help the neighborhood, and he agreed to interrupt his vacation last week to meet with them, share information, and perhaps soothe their anger.

Fort Worth City Councilman Danny Scarth showed up as well, even though he’s not the most popular guy in the neighborhood these days. Some residents say he hasn’t done enough to protect them.

The only one who didn’t show up was Mike McGuffin, the guy causing all the angst. He turned his once-beautiful 42-acre cow pasture into a mining operation that has resulted in a towering mound of dirt pushed up against the Mallard Cove residential neighborhood near Old Randol Mill Road. 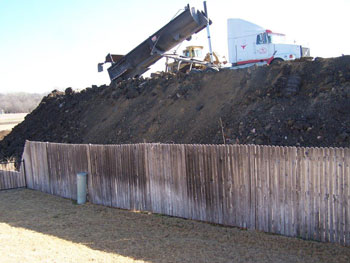 “I didn’t know there was a meeting,” he told Fort Worth Weekly in a phone interview shortly before the meeting began. “I haven’t been notified at all.”

He wouldn’t have been welcomed. The 30 residents who met in the cul-de-sac expressed a distinct dislike for the neighbor who is making their lives miserable.

“We feel like we’re being held hostage,” said Craig Dyer, whose backyard privacy fence is dwarfed by a huge mound of dirt that’s dominated his view since February. “The irony is, I paid a premium price for this lot because of the view.”

McGuffin said he is removing sand from his pasture and replacing it with more nutritious soil to increase the quality of coastal hay he grows to feed his small herd of cows and horses. Trucks and heavy equipment began moving dirt in February in the pasture, which is zoned for agricultural uses. That zoning allows property owners to move dirt around as they see fit, and McGuffin had plenty to move. His crew was digging as far as 20 feet down to remove sand. Meanwhile, he has piled up new soil to replace the sand, and he plopped the huge mound of it along the property line he shares with about a dozen homeowners.

They complained to city officials, and within two weeks the city issued a stop-work order. The residents suspected McGuffin of strip mining — digging up tons of sand to sell to the construction and gas drilling industries. They said his claim of improving his soil to grow hay is a ruse to cover up his actual desire to mine and sell his sand for profit. Once the work began, they noticed trucks bringing in dirt and hauling out dirt. The truck traffic was frequent, causing backups on the narrow Old Randol Mill Road. And the huge dirt pile created frequent dust clouds that enveloped the neighborhood. Residents also complained about their views being destroyed.

“This has been a real bummer for those of us neighbors who have to look at this,” Dyer said.

McGuffin said neighborliness works both ways. He feels attacked by residents whom he said made little effort to communicate with him before complaining to the city. His dirt-moving project would have been finished by May if the city hadn’t forced him to stop work at the neighbors’ behest, he said.

“The neighborly thing would have been for them to come to me, and I would have told them that after three months this would be completed,” he said.

Instead, he’s been in limbo, the dirt mound is still there, and he’s had to pay thousands of dollars for a geological study to prove to the city why removing sand will benefit his hay crop.

“We haven’t been able to finish it up because of the stop order,” he said.

He isn’t concerned about his neighbors missing their view. After all, the view they enjoy so much is his pasture.

Once he’s done, he said, their view will be improved — fresh soil is expected to improve his hay production and allow him to graze more cattle there.

One resident in the cul-de-sac meeting accused Hall and city officials of moving slowly and not being tough enough on McGuffin. Hall strongly disagreed, saying staff “hasn’t danced around this issue.” Property rights give McGuffin the upper hand unless he does work that violates city code. Agricultural zoning doesn’t allow for hauling in large amounts of fill dirt from an outside source without a permit, and that technicality allowed city officials to temporarily stop the work. But the primary concern was to negotiate a timeline for McGuffin to move the dirt pile from the fence line.

“The land is zoned ‘ag,’ and that’s one of the most lenient designations,” Hall said. “Mike McGuffin legally could carry this on from now to kingdom come. We tried the approach we felt would get the mound removed the fastest.”

The city and McGuffin have since come to an agreement. McGuffin said he would remove the dirt mound within a month and complete the entire project within three months. Work resumed last week.

“It looks like we may get some relief,” Dyer said. “But I don’t really trust Mike McGuffin or the city.”