Like last night’s Whataburger, they’re back. Rocking their Confederate flags, boasting about amounts of rot-gut consumed and numbers of women bedded, avoiding showers, the boys from Pimpadelic never really went away, though based on their new album, Drink! Drugs! Sex!, you’d be forgiven for thinking they’ve been living under their Blue Mound mobile home for the past two decades. 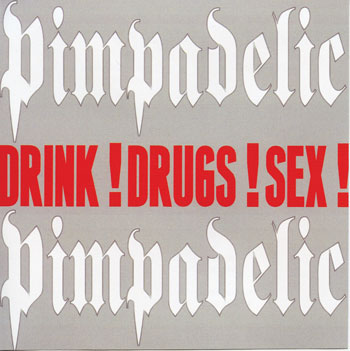 Recorded at Goodnight Audio in Dallas, the Fort Worth quartet’s 650th album basically amounts to a widget from an assembly line manned grudgingly by David Allan Coe, GG Allin’s ghost, and Mötley Crüe (yes, the whole band). The Pimps’ reverb-laden guitar tone is so generic it probably came in a white can labeled “Rock Guitar Sound,” and the lyrics elevate Foghat’s to Shakespearean heights (“When you dig a hole and go on and bury me,” frontman Easy Jesus Coe croons wearily on “When I Die,” “Put that bottle of Jim Beam to rest beside me”). However, the riffage throughout is often pretty darn tasty, in a guileless, endearing, mature kind of way, and melody reigns like Ms. Watermelon over her plump subjects.

On the leadoff track, “White Trash M.C.,” a syrupy chordal progression chugs down the wrong side of the tracks as Coe, his pipes as sugary and sassy as Vince Neil’s, sings, “I’m from a run-down trailer park / Fort Worth, Texas, BMT / I got a welfare Lone Star card / And a bank full of fuckin’ G / From singin’ my songs and sellin’ drugs / ’Cause I just don’t give a fuck / And in case you don’t know who I am / She calls me her Blue Mound Superman.” A nifty one-man call-and-response drives the chorus, a breakdown of rumbling toms and muted chords, time seemingly suspended like so many monster truck axles and shocks. “I like it / I love it,” the Blue Mound Superman growls. “You can talk shit, but you ain’t sayin’ nothin’ / I like it / I love it / I’m fuckin’ your bitch, you can’t say nothin’.”

Coe kickstarts his heart on the following track, “Something New,” a sunshiny jaunt that in 1985 would have sent program directors across the country scampering for their checkbooks. Anchored by a delicious, hyper-melodic chorus around which a tough, textured riff buzzes and grinds like a whiskey-fueled chainsaw, the boogeying ditty transcends the Crüe-esque proportions to which it blatantly aspires and registers an unimpeachable pop success.

Pimpadelic started out in the early 1990s by following Fred Durst and his band, whatever their name was (anyone remember?), down the crusty rap-rock path, eventually to, first, obsolescence and, then, to parody. Unfortunately, while the Pimps long ago shelved the synthetic beats for actual drums and the raps for sung lyrics, some revenants of the tragicomedy that was rap-rock remain, including but not limited to the gross misogyny and the boasting.

The Pimps deserve a round on the house, though, because despite their annoying braggadocio and laughably puerile worldview, their musicianship, while hardly virtuosic, is professional, solid, and tight –– and, of course, it’s impossible to pull off in a drunken haze and/or in flagrante with floozies, which points up the hypocrisy inherent in crotch-rock (and, for the record, in gangsta rap). Being trapped beneath the chicken-fried girth of the American Dream hardly allows time for satisfying sexy muses. “Realness,” in song (or in art, literature, or film), is never anything less than a sophomore’s seventh-period-geometry-class daydream. Best maybe to acknowledge the living lie instead of ignoring it and coming off like a huckster. The closest that Coe and company get to reality here is their cover of Nine Inch Nails’ ’90s-era college-radio hit, “Something I Can Never Have,” in which Coe’s heart bleeds all over lazy, fuzzy guitars and lazy, semi-countrified drums, actually framing the singer as vulnerable (and not only to Kryptonite). But any breaches of scumbag etiquette are erased a few moments later by the next song, the title track (subtitled “Priorities”), a declaration of independence from non-ridiculous society, tattooing the always-handy rallying cry –– “Drink! Do Drugs! Have Sex!” –– on listeners’ ears.

The $6,400 question remains: Are the Pimps aware of their outright absurdity? Sadly, probably not. The defensive vibe in which Coe and his boys couch their proclamations of abject scumbaggery defeats irony, a plus. But a little levity and self-awareness could have gone a long way in helping Drink! Drugs! Sex! go down, like Jim Beam, a tad more smoothly.