Bowling has long been a fascination of Chow, Baby’s — not actually rolling the ball and knocking down pins, but all of the stuff that goes along with it. It’s the only sport I can think of that requires its players to rent shoes. It’s also a sport where it’s OK to drink alcohol while you play. I’ve found that moderate drinking actually improved my game, on the few occasions when I played. I’m mesmerized by professional bowling on TV— though it’s true I generally only find the shows while channel-surfing during fits of insomnia. Bowling alley culture is also fascinating — one can play, drink, conduct sociological research, all with your own server. 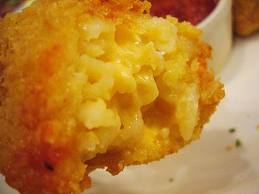 I had heard that Lucky Strike Lanes (2845 W. 7th St.) was not your typical bowling alley, and that turned out to be true. The place is swanky, with a sleek, modern bar and cool, comfortable covered patio overlooking West 7th. The menu wasn’t exactly traditional bowling alley fare either. You’ll have to look elsewhere for rancid hot dogs and stale nachos.

The menu offers a variety of salads, steaks, seafood, and gourmet pizzas. The difficulty I usually have in deciding what to eat was compounded by the fact that I was bowling while trying decide. (My first roll was a strike, my only one of the evening, as it turned out.) Just as I thought I had my dinner figured out, it was my turn again.

Eventually, I settled on the artichoke dip ($8.50), mac–and–cheese bites ($8), and a Margherita  pizza ($9). Though my guest/bowling competitor and I didn’t feel that our wait was all that long, our overly conscientious server, a young-looking woman in a black pencil skirt, continued to reassure us that our food was indeed coming.

Just as I was mounting one of the greatest comebacks in my personal bowling history, the food arrived. The artichoke dip was so hard and stale, I doubt King Arthur himself could have pulled Excalibur from it. The thin chips were no match. But we eventually penetrated the surface and found what might have been a decent dip, back when it was fresh. The mac-and-cheese bites, on the other hand, were fantastic. The battered, cheesy bits of macaroni were served with a tomato sauce, and perfectly crunchy.

Germ fanatic that I am, I was a little reluctant to eat the finger foods after just having bowled. I’m not Howard Hughes-y weird about germs, but the finger holes on a bowling ball just raise too many ghastly questions.

I fought through my neurosis, though (with the aid of some Purell), and managed to enjoy the pizza. I found the thin pie with basil leaves and a single cherry tomato on each slice to be a little bland, but I needed comfort after rolling so many gutter balls — I eat when I’m sad.

Had I ordered that meal at a restaurant, I likely would have been underwhelmed. For a bowling alley, it was pretty good. Fancy food at the lanes kind of feels wrong — it’s a blue-collar game and, really, nicely prepared hot dogs and giant pickles just seem more appropriate. Then again, maybe my tastes, much like my bowling game, are in the gutter.