As a fledgling journalist at Arlington’s Young Junior High School, I got to have lunch with Molly Ivins. The legendary writerly rabblerouser who died of breast cancer in 2007 at the age of 62 had previously, famously worked for both The New York Times and The Texas Observer and was at the time two years from the end of her tenure at the Dallas Times Herald. If she was weary of her battles with Dallas city leaders and the work of a regular column set in a city she didn’t really care for, Ivins never showed it to my classmates and me. She spent the hour regaling us with stories about war-room journalism and ways to make a difference in the world. 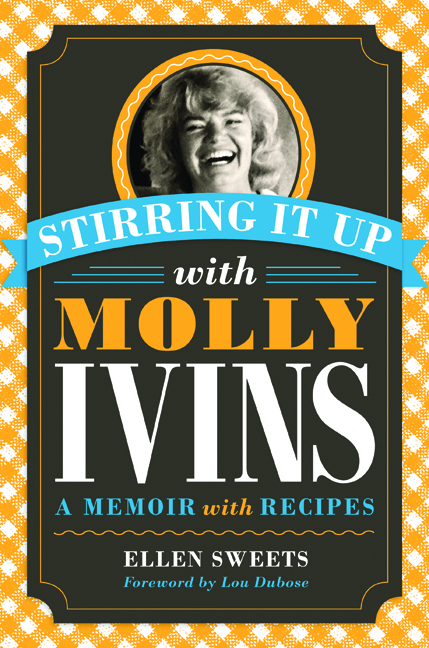 That’s the Ivins many people know: the consummate public speaker with the rapier wit, liberal ideology, and deeply Texan drawl. But in Stirring It Up with Molly Ivins: A Memoir with Recipes, Ivins compadre Ellen Sweets, a well-respected writer in her own right, opens the curtain a little and shows that there was more to the formidable six-foot-tall Ivins than her cigarettes, cowboy boots, and love of the First Amendment.

The two met in 1990 not long after an opening at The Dallas Morning News brought Sweets to Texas from her hometown of St. Louis. Sweets, who writes that she “didn’t know a soul,” introduced herself to Ivins at an American Civil Liberties Union meeting where Ivins was guest speaker. The famed columnist took Sweets by the hand and introduced her to the people who would become Sweets’ de facto Dallas family. The women, bonded by love of travel and liberal ideology and both recovering from overbearing parents, spent hours, mostly in Ivins’ Austin kitchen, making soul food and soul-deep memories.

Sweets, currently based in Austin, has written about everything from homicide and racism to food and is a recipient of a James Beard Foundation award for her food writing. (She’s also got a killer name for a foodie.) And her experienced biographical reportage and loving food knowledge make a beautiful combination. Sweets blends recipes, cooking stories, stories about famous Ivins friends, and her own experiences with racism growing up in segregated St. Louis into a mix richer even than Molly and Ellen’s Garbage Gumbo (the recipe for which is on page 60).

Although Sweets was the official food writer and Ivins the political pundit, Ivins apparently had a staggering ability in the kitchen. For a friend’s birthday, Ivins made Four Seasons Chocolate Fancy Cake, a 24-ingredient recipe that calls for two hen-houses’ worth of eggs and for the cook to painstakingly jelly-roll the layers before “frosting” the thing with chocolate marzipan. It’s the kind of recipe that a 1950s housewife would lavish days over. Ivins was no ’50s housewife, but she loved the complexities of fine cooking.

Once, for dinner, the two made cassoulet, the needs-to-meld-overnight classic French dish that literally took the women an entire weekend to prepare, as Ivins insisted on using fresh (not canned) white beans and rendering her own duck. “It took less time to film Gone with the Wind,” Sweets recounts.

Some of Sweets’ stories are less than flattering. Ivins apparently had an inability to calculate the time needed to make a complex recipe, and often dinner reached the table around what would normally be considered bedtime. Sweets would often have to stretch recipes cooked in Ivins’ kitchen to feed perhaps twice what the recipe called for, because Ivins had forgotten how many people were actually expected.

Ivins, Sweets, and many of their female friends were in that generation of women who struggled to get equal treatment from employers, often at great personal cost. In the case of Sweets, who is black, racism as well as sexism was often an obstacle. She relates an incident in 1994 when she was covering a reception for author John Berendt (Midnight in the Garden of Good and Evil) in a “chi-chi Highland Park” neighborhood. The hostess took one look at Sweets, assumed she must be a server, or a maid, and directed her back to the kitchen. Apparently, no real apology was ever offered.

“Molly once asked me, over a mountain of peach cobbler and vanilla ice cream, why I didn’t hate white people, why I wasn’t angry,” Sweets writes. “The only answer I could come up with was that investing energy in hate is nonproductive. In the end, it serves no meaningful purpose other than to corrode whatever vestiges of decency reside within the hater.”

Ivins probably knew that too. In her inimitable way, she managed to write a successful book about the (sometimes vitriolic) complaint letters about her columns (Molly Ivins Can’t Say That, Can She?). Suffice it to say that Tina Fey and I –– and any other woman who tells it like she sees it for a living (even Sarah Palin) –– owe a debt to those women. Both Sweets and I wish we could hear Molly’s take on Palin. And Michelle Bachmann.

Occasionally, Sweets rambles a little and re-introduces characters and concepts she’s written about earlier. But it’s a memoir, and a little fond rambling is certainly in order, especially when the memories include Ivins’ color-coded meals and the story of Sweets and Ivins’ liberal uses of the five-second rule. And the food. Lord, the food. The recipes –– including two kinds of chili, the chicken-fried steak recipe from Dallas’ now-defunct No Place, and Sweets’ chef-daughter’s orzo mac ’n’ cheese –– are probably worth the price of the book alone.

In Ivins’ own words, “You can’t make this stuff up!”

Stirring It Up with Molly Ivins: A Memoir with Recipes, by Ellen Sweets