Earlier this year, the Weekly ran a cover story on Fort Worth-based urban fantasy novelist Rachel Caine, whose real name is Roxanne Longstreet Conrad. After publishing many books under various pen names in the ’90s, Conrad hit it big as Caine with two series: the Weather Warden books, about an international team of agents who control the elements to stave off natural disasters, and the young adult Morganville Vampire books, about a small Texas college town controlled by bloodsuckers. The Morganville novels have taken her to The New York Times and USA Today bestseller lists and on book-signing tours to greet teen and twentysomething fans around the United States, Europe, and Australia. 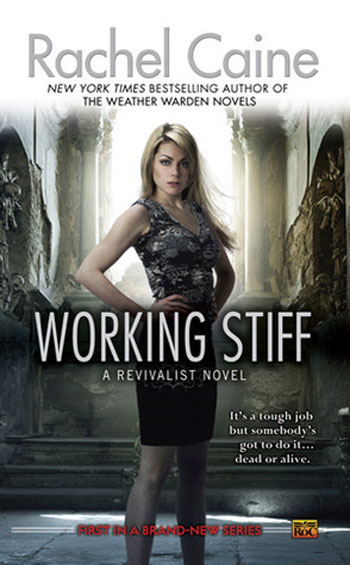 The ultra-prolific Caine/Conrad is back in the land of adult genre fiction with her new novel, Working Stiff, the first in a new series called Revivalist. Her books are tied together by self-deprecating protagonists whose femaleness is mostly a moot point. While the hurdles of succeeding in a man’s fantasy action world aren’t ignored, Caine’s female heroes don’t ask for sympathy –– they kick ass with efficiency and aplomb. Caine equips them with special powers, weapons, and combat skills but, more importantly, with self-doubts and moral conundrums. The author knows a crusader questioning her abilities and her mission is always more suspenseful than some robotic avenger with no self-awareness. This is the key to the smart, pulpy pleasure of Working Stiff — non-heroic readers can easily project themselves into the designer high heels of Bryn Davis, the gorgeous 26-year-old zombie chick trying to maneuver her way through the labyrinthine corporate machinations of a corrupt pharmaceutical company called Pharmadene.

Yep, Bryn is a member of the undead club. Zombies are a hot property these days thanks to the AMC cable series The Walking Dead and movies like Zombieland. The undead in Working Stiff aren’t shambling predators hell-bent on brain casserole but dead people who’ve been revived –– hence the series title Revivalist –– by an experimental drug called Returne that was developed by Pharmedene. Bryn, a young Iraq War veteran with hints of post-traumatic stress disorder, stumbles into her zombie status when she gets hired as the funeral director at a family-owned Southern California mortuary called Fairview. The owners are buying illicit Returne from a Pharmadene insider and selling it on the street to bereaved families desperate to revive deceased loved ones. There is a catch, though. Returne keeps dead people alive for only a few days, which means takers need a daily injection of the stuff to keep from sliding back into a state of half-living decay that Caine describes with one gruesome and memorably effective scene two-thirds of the way through the book.

Bryn is killed early in the novel after stumbling onto a drug deal in the basement of Fairview. She is revived via an injection of Returne by the corporate powers at Pharmadene, who give her spiffy new designer clothes, a Baretta 92FS firearm, and a new job as a corporate agent trying to discover the identity of the insider who’s leaking Returne to the black market. Bryn has no choice but to comply –– her new employers are literally keeping her alive with the same drug she’s trying to keep off the streets.

Working Stiff offers an intriguing new twist on the zombie mythology: the undead as drug addicts, jonesing for life, and willing to do anything to maintain it. The novel gets more satirical as it proceeds, lampooning corporate culture and the extravagant demands of loyalty placed on employees. But while Caine may be labeled an “urban fantasy writer,” it’s simpler and more accurate to say she writes adventure stories. Satire and fantasy aren’t at the top of her to-do list. Action is. Working Stiff delivers plenty, with confrontations and discoveries popping up every few pages. Sometimes all Bryn has to do is open a door and she’s suddenly placed in a new peril that complicates her original mission.

It turns out Pharmadene security head Patrick McCallister is a double agent with an agenda that runs counter to the company bottom line, which involves –– you guessed it –– global domination. There’s also a psychopathic embalmer named Fast Freddy who hovers at the edges of the story seeking revenge on Bryn, not to mention a pet bulldog named Mr. French with a knack for working his way into the action. But I won’t give anything else away. Suffice to say, if you’re looking for a twisty, fast-paced, escapist read, hop on the Revivalist train and settle down with Working Stiff. You can say, “I was a fan from the start,” because if Caine can keep the suspense flowing in future books, this story has HBO series written all over it.