A dream turned into a nightmare very quickly for Annette and Michael Daniel — and it’s one they can’t wake up from. Everything they have worked for is slipping away, and there doesn’t seem to be anything they can do to stop it.

The Daniels moved in November 2007 from Orange County, Cal. to a beautiful home in a gated community in Azle in Parker County, hoping to reduce the stress in their lives. Their five acres included a pool and outdoor jacuzzi, and they bought horses, miniature donkeys, and other livestock. The couple ran a travel consultant business from home. In the evenings, they could watch deer grazing in their neighbor’s pasture.

“This was everything we could have wanted,” said Annette. “And then it started changing.” 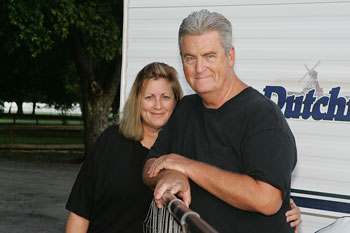 The first change occurred just four months after they moved in, when Devon Energy built a gas well pad next to their fence line, ruining the view for months and sending toxic residue into their backyard every time it rained (“Paradise Lost”,  June 18, 2008).

One month after the pad appeared, said Annette, “We got slammed by a flash flood that nearly entered the house. A neighbor called to ask if we were all right, and then she told us we might be in a flood plain.”

The flood plain question “had come up once — that some of the land but not the house was in a flood plain” during discussions before the sale, Annette said, “but when it did, the realtors produced several reports showing that the property was not in the flood plain.”

“We never would have purchased the house if there were any flood issues,” said Michael. The couple did know that runoff from heavy rains had washed into their pool and come close to the house.

People involved in the sale of the property to the couple disagree. They later maintained in court that the Daniels were or should have been aware that the property they were purchasing was in a flood plain.

After the neighbor’s comment, the Daniels began to look into the issue and eventually got in touch with Parker County flood plain director Kirk Fuqua.

“He told us that he didn’t understand why the house was sold as not being in a flood plain when it had always been in the FEMA 100-year flood plain,” said Annette. Fuqua confirmed that information for Fort Worth Weekly and said his records showed no remedial action that would have removed the house from the flood plain.

“Not only that, but it turned out our house was built right on top of a drainage easement, a platted stream,” said Michael. The unnamed stream is a tributary of nearby Silver Creek.

Worse was coming. In 2008, a new FEMA study came out, again showing the Daniels’ house in the middle of a flood plain. As usual, FEMA alerted lenders, and three months after the first flash flood, Chase Home Mortgage Finance LLC, wrote to tell the Daniels they would need to acquire flood insurance.

The insurance added $500 a month to a steep mortgage that was already beginning to pinch, as the recession slowed the income from their travel business.

Unfortunately, the couple soon discovered that the Parker County appraiser had reduced the appraised value of their home to zero after the new FEMA study, and you can’t refinance a house valued at zero. Their land dropped in value from $75,000 to $25,000.

“So we owed $300,000 on a house that was valued at zero,” said Annette. “And with business slowing down we couldn’t even get at our equity. Who could have dreamt this was going to happen?”

The couple had hoped to be able to borrow against the $80,000 equity they had in the house via their down payment, to get them through the recession, if necessary. Not having it meant relying on credit cards to pay the flood insurance and upkeep on their horses and other animals. Also, cracks had started appearing in the floor and chimney of the house.

The couple felt they couldn’t, in turn, try to sell it without full disclosure. “Still, we needed to get something out of it, so we called ‘We Buy Ugly Houses,’ and even they wanted nothing to do with it when they heard it was in a flood plain,” Michael said.

Finally, they decided to sue everyone they could think of, from the previous home owners to the lenders to the real estate agents who had who handled both sides of the sale, alleging that all those involved knew their home was located in a flood plain and on a drainage easement and had kept that information from the Daniels.

When the civil case went to trial in September 2010, the attorney for two of the defendants, realtors Piper Reese Pardue and Rees Randel Atkins, was ill. As the trial had already been postponed three times, the Daniels, through Dugas, dropped their suit against Pardue and Atkins intending to refile later, and agreed to proceed against the Daniels’ realtor, Deborah Moran and the company she worked for, Ready Real Estate, LLC. (The Daniels had previously settled with the other defendants.)

The jury also found the Daniels partly responsible for their situation due to negligence in investigating the property prior to purchasing it.

In an odd finding that turned out to be disastrous for the Daniels, the jurors indicated on the forms delivering their verdict that the Daniels should receive nothing in actual damages from Moran and Ready Real Estate LLC, but did award $125,000 in punitive damages and an additional $42,230 in attorney fees.

The Daniels never received any of the $125,000. Despite the jury’s awarding of punitive damages, Parker County District Court Judge Graham Quisenberry entered a judgment finding no fraud and no damages.

“The jury gave the plaintiffs no actual damages. They did award the Daniels extraordinary damages for Moran’s knowingly having committed deceptive trade practices, and then additional funds for attorney’s fees, I believe,” Quisenberry told the Weekly. “But if they did not provide actual damages, any other damages they found are not considered by the court. Therefore, no damages were found.”

The Daniels’ attorney, Dugas, was not happy with the decision. “The judge elected not to enter a judgment that showed that Moran had committed statutory fraud,” he said. “And he also decided not to correct the inconsistency between the jury’s finding of zero damages on actual damages and the near $170,000 in total damages the jury awarded the Daniels.”

Dugas thought the non-awarding of actual damages was a simple juror error and filed for a new trial. In fact, the attorney said, Quisenberry called him to suggest he request a new trial, something the judge said he “wouldn’t have done.”

Quisenberry denied the motion. The Daniels could have appealed the decision but were running out of money for the fight. They decided instead to proceed with their case against Pardue and Atkins.

That case was set for trial in January 2011. Notices of the setting had gone out in November, but neither defendant showed up for the trial or contacted the court beforehand. Quisenberry granted the Daniels a default judgment, ruling that Pardue and Atkins had committed fraud in a real estate action. He awarded the Daniels almost $1.2 million in damages, representing the initial price of the house plus exemplary damages.

“Most courts don’t allow you to get a default judgment award,” said Dugas. “They generally give opposing attorneys a chance to fight default judgments, and Judge Quisenberry even told me he’d let their attorneys have a chance.”

Shortly after the realtors received notice of the default judgment, their attorney responded with a motion asking that judgment be set aside because the process server had failed to get his signature notarized. In March, Quisenberry agreed, and, on the basis of that technicality, granted a motion for a new trial.

But the new trial never materialized. In April, Pardue and Atkins hired a new attorney who asked for a summary judgment in favor of his clients on several grounds, including something called collateral estoppel. That, Dugas said, is “a legal term that means if something has already been decided, you can’t bring the same issue to court against the same defendants.”

Chris Collins, attorney for Pardue and Atkins, said, “At the time of the trial against Moran and Ready Real Estate, the Daniels voluntarily non-suited our clients. Having been unsuccessful in that first lawsuit and wanting a second bite at the apple they filed a second suit against the same defendants for the same exact acts and alleged acts….We proceeded with a motion of summary judgment … which was ultimately granted by the court.”

Dugas said he didn’t see how that argument “applies in this case at all, because Pardue and Atkins never went to trial, but the judge accepted it and awarded a summary judgment, effectively throwing out the case.” Although there is still time for the Daniels to appeal that ruling, they are out of money, which means that, in all likelihood, their court actions will end with no judgments entered against any of the defendants.

“We’ve been through three years of hell,” said Annette. “We have cracks in the floor, cracks in the fireplace from the water damage to the foundation, and then we were awarded a million dollars. It was so vindicating. And then they took it away. It was just devastating.”

“Weatherford is a small town … and the Daniels are not from there,” Dugas said. “The judge wants to move up the judicial ladder. He said so himself. And he can’t do that if he gets the biggest realtors in Parker County mad at him.”

Contacted by the Weekly, Moran said she’d been found guilty of nothing and that the Daniels “should just get on with their lives.”

Moving on with their lives is something the Daniels are finding hard to do. They can’t sell the house, they can’t afford to keep up payments on it, and they can’t recover the money they’ve already put into it. With the travel business still in the doldrums, they’ve had to sell off their horses and miniature donkeys. In late September they sold most of their possessions at an estate sale, including Annette’s wedding ring. They’ll be foreclosed on in the near future.

“In the end they got screwed,” said Dugas. “It’s as simple as that. Nobody wanted to look at the reality of that real estate deal.”