I am not a birder, but I can sympathize with them. Check me out in early December when I’m frantically tracking down Greek experimental films and dramas about depressed Japanese people. I may not get someone else’s obsession, but I do know a thing or two about obsessive behavior. That’s why I was so dissatisfied with The Big Year, a movie about birding that plays its subject too easily for broad, quirky comedy. 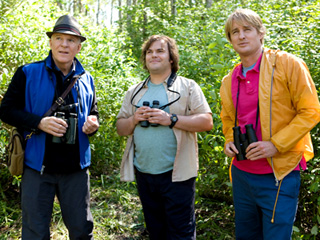 The film is loosely adapted from a 2004 book by Mark Obmascik that chronicles the unofficial, self-policed annual competition among North American birders to see which of them can spot the most species of bird in a calendar year. To undertake a Big Year, birders — who differentiate themselves from “birdwatchers” as people who travel to find birds — put their careers and marriages on hold to spend 12 months crisscrossing the continent, braving hostile travel conditions, eating bad food, sleeping in worse places, squatting for hours in harsh terrain, and being ready to pack up and go at the drop of a rare-bird sighting or a favorable weather report.

Our avian-besotted subjects are Brad Harris (Jack Black), a sad-sack computer programmer who’s just scraping by in his quest to see his birds, and Stu Preissler (Steve Martin), a corporate CEO who can afford to pursue his Big Year in relative comfort. Despite their different circumstances, they bond in their lust to take down Kenny Bostick (Owen Wilson), a smug cock of the walk looking to better his all-time record of 732 bird species sighted in one year, a number cited with awe and envy by his fellow birders.

Screenwriter Howard Franklin gives Brad a ton of unnecessary voiceover narration to deliver and can’t come up with a decent joke. Maybe that’s why the lead actors seem to be going through the motions and never mesh with each other. Neither Kenny’s attempt to save his marriage nor Brad’s flirtation with a novice birder (Rashida Jones) gives the proceedings any emotional weight. They just allow the movie to wax sententiously about what’s important in life. The film has a mouth-watering roster of supporting actors (including Anjelica Huston, Dianne Wiest, Brian Dennehy, Tim Blake Nelson, Joel McHale, Jim Parsons, and JoBeth Williams), yet their talents go criminally to waste.

Worse yet, director David Frankel (who has fallen back to earth after helming The Devil Wears Prada) never seriously grapples with why these characters’ shared passion leads them to such a grueling, expensive, and time-consuming endeavor. Only once does The Big Year touch the heart of birding, when it observes two bald eagles in their courtship ritual, a majestic moment that stands out all the more because the rest of the film is so woefully short of such beauty and mystery. To understand what drives the people here, the movie needed to give us more of the birds.