Like many of you, I had zero expectations for the remake of Footloose. The original 1984 film has already had a second life as a Broadway musical. A third version just seemed like yet another case of Hollywood remaking something for lack of any better ideas. So imagine my surprise at finding out it’s really good. Better than the original. So good that I’m seriously considering putting it on my year-end Top 10 list. I feel like I’ve been blindsided by a tractor. And I couldn’t be happier about it. 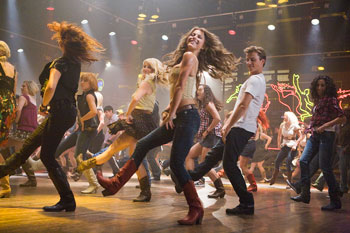 The movie begins in earnest with a bus arriving in the hamlet of Bomont, Ga., to drop off  Ren McCormick (Kenny Wormald), an orphaned kid from Boston who’s come to live with his Uncle Wes and Aunt Lulu (Ray McKinnon and Kim Dickens). A former gymnast who loves to dance, Ren is stunned to learn that Bomont has outlawed public dancing, an effort spearheaded by the Rev. Shaw Moore (Dennis Quaid) after his son was among five teens killed while returning home from a dance. If Ren’s attempts to change the law aren’t enough to land him on Moore’s bad side, the preacher’s daughter Ariel (Julianne Hough) wants to make Ren part of her ongoing rebellion against her religious upbringing.

Director/co-writer Craig Brewer turns out to be the perfect man for this job. His feel for small-town Southern atmosphere and his ear for music can be seen in his previous two films, Hustle & Flow and Black Snake Moan. Those indie films were marred by Brewer’s relentlessly conventional mindset, but that same quality helps him transition effortlessly into the Hollywood system. The result is a movie that flows smoothly without being overprocessed, and it feels like the work of a filmmaker who’s found his niche.

Much of the original’s dialogue is reproduced verbatim here, and some of the shots are copied as well. Yet Brewer just as often puts his own spin on matters: The original’s signature, abstract opening sequence with close-up shots of kids’ feet as they dance gets turned into something more concrete here. Some of the songs are new; the hip-hop entries acknowledge the South’s racial diversity (something the original film, like most American movies of its time, preferred to ignore), but Big & Rich’s rollicking country song “Fake I.D.” is the best addition. The songs from the original — which rank among best movie songs of their decade — all appear in different guises here. Ella Mae Bowen’s sodden ballad-like rendering of “Holding Out for a Hero” is rampantly unimpressive, but the rest are mostly solid. It’s hard not to be charmed by the little girls performing the first verse of “Let’s Hear It for the Boy.”

The remake also duplicates the difficult trick of showing both the good and bad effects of religion and small-town life. The script by Brewer and the original’s writer Dean Pitchford is full of small but felicitous fixes. Ariel’s beating at the hands of her ex-boyfriend (Patrick John Flueger) is immediately followed by the scene in church when she finally vents her long-suppressed rage at her dad, an ordering that makes this story much more logical and powerful. The uncle and aunt are far more layered, sympathetic characters here, with Wes quietly telling off the preacher for calling Ren a bad influence. The new backstory with Ren having nursed his mother through a fatal illness gives this light-footed character some gravity, and it leads to a terrific exchange between Ren and Moore over their lost loved ones.

Churlishly, I note that the newcomer Wormald (a former backup dancer for Justin Timberlake and others) can’t match the live-wire charisma of his predecessor in the role, Kevin Bacon, even though no young actor today could hope to win that battle. Wormald is a more accomplished dancer, however, which pays off during the dance sequences, and he does well despite his inexperience in front of the camera. The same goes for Hough, capturing the character’s messy anger in her first substantive acting role. Miles Teller takes up Chris Penn’s role of the rhythmically challenged redneck who becomes Ren’s best friend, and the actor (who gave a far different performance in Rabbit Hole) plays it with an unholy zest, stealing laughs left and right and singing a hilarious line at the end of a sequence involving school buses.

With all this, Jamal Sims’ joyous choreography is just the cherry on top of this movie that could have gone wrong in many ways but instead hits a narrow sweet spot that makes it a glorious piece of entertainment for a new era. And who could ask for more?