Talk about great timing: Margin Call premiered at the Sundance Film Festival last winter to middling buzz and reviews, but now this drama — set at a brokerage firm just before the 2008 financial meltdown — is hitting theaters just as the Occupy Wall Street movement has crystallized all our discontents with our economic and political systems. The market is primed, as they say, so it’s no wonder the reviews accompanying the movie’s release have been rapturous. This well-made and well-acted low-budget film may fall slightly short of the advance hype, but without quite meaning to, it has captured our cultural moment rather well. 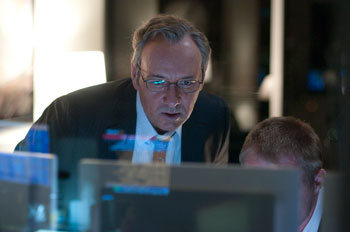 The movie takes place over a breathless 24 hours at an unnamed Wall Street firm that’s obviously meant to be Lehman Brothers. There, late one night, risk analyst Peter Sullivan (Zachary Quinto) picks up some economic models left by his recently downsized boss (Stanley Tucci) and discovers that the market is headed for a crash that will ruin the company. His alarm moves up the chain of command until CEO John Tuld (Jeremy Irons) orders the company’s entire stock holdings sold off at any price to any willing buyer the next day. The move will save the firm but destroy its reputation when the buyers — a.k.a. you and I, or rather the fund managers who handle our stock portfolios — discover that they’ve purchased worthless toxic assets. Moreover, the firm’s employees will torch their own careers by participating, so upper management pressures Peter’s boss Sam Collins (Kevin Spacey) to lie to his traders, giving them false assurances so they’ll go along.

First-time feature filmmaker J.C. Chandor knows this territory well as the son of a 40-year Merrill Lynch employee. He edits this thing with admirable fleetness, and though he throws a fair amount of jargon at us, he works to keep the movie readily intelligible to viewers who have no background in finance. The film could use a bit more visual polish and probably would have gotten it in a big-ticket Hollywood treatment. Then again, Chandor’s filmmaking is free of the portentousness that tends to seep into Hollywood movies that tackle big issues.

Simply telling this story from the bad guys’ point of view yields some chilling insights. Most chilling of all is that the firm’s despicable actions are completely reasonable, given their information and the system in which they operate. There’ll be a crash regardless of what the company does, so they might as well cut their losses. As someone says, “It’s better if we start [the panic].” The firm’s head of trading (Paul Bettany) does go on a Rick Santelli-esque rant about the impact of the company’s actions on the wider world, concluding his speech with the line, “Fuck normal people.” More typical of the movie’s viewpoint, however, is Tuld’s speech at the movie’s climax, rattling off the long list of years in which America has suffered financial crises: “We can’t help ourselves. And you and I can’t control it or stop it or slow it or even ever-so-slightly alter it. We just react. And we make a lot of money if we get it right.” It’s one thing to think of Wall Street as a bunch of fat cats making millions by conning us into bad investments, but it’s scarier to contemplate them as a bunch of working stiffs muddling through, not knowing any other way to conduct business.

Chandor also does well with his cast, where even lightweights like Simon Baker and Penn Badgley look like they belong with the likes of Irons and Spacey. The latter is particularly fine; besides sarcastic villains, flawed guys wrestling with their ethics are in Spacey’s wheelhouse, and he has a great moment when Sam is asked whether he’s told his adult son about the coming implosion. He starts to say, “No, I hadn’t thought to…” and then stops to realize what that says about him.

Since 2008 a spate of fiction films has tried to deal with the current recession, and many have either come up empty (The Company Men, the Wall Street sequel) or only addressed it obliquely (Up in the Air). Margin Call has hit its target more soundly than any of them, and the only comparable achievement is Charles Ferguson’s Oscar-winning documentary from last year, Inside Job. Whereas most movies try to help us escape reality, this one uses the medium of entertainment to tell us exactly where we are. That’s too rare, perhaps. It’s worth savoring regardless.