Mark Harris recently wrote that while film critics often slam a movie whose directors and/or actors are better than its weak script, those same critics hardly ever claim the reverse, that a movie’s great script is butchered by its director or actors. I wasn’t looking to prove Harris wrong, but that was before J. Edgar fell into my lap. Clint Eastwood’s biography of longtime FBI director J. Edgar Hoover has an intelligent, polished, well-researched screenplay by Milk’s Dustin Lance Black that fairly brims with dramatic possibilities. Yet its actors and especially its director turn this absorbing, polarizing public figure’s story into a slog. 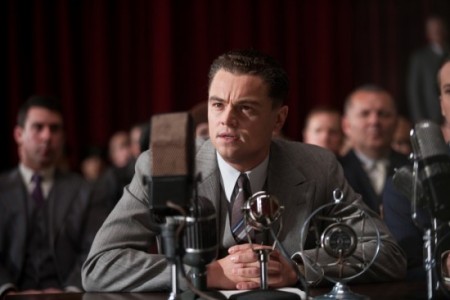 Much of the story comes through a framing device, in which the aged Hoover (Leonardo DiCaprio), seeking to publish the story of his glorious law-enforcement career, dictates his memoirs to a series of FBI agents. In flashbacks, we see Hoover organizing and centralizing the nascent FBI, clearing the bureau of patronage and political hacks, lobbying for laws that give the bureau real power, and employing science in service of crime detection. However, the movie also shows us what Hoover leaves out of his dictation: his childhood dominated by an imperious, gay-hating mother (Judi Dench) and his decades-long affair with Clyde Tolson (The Social Network’s Armie Hammer), a young agent who’s quickly ensconced as Hoover’s trusted second-in-command.

Oddly, the film says little about the FBI’s systematic persecution of homosexuals under Hoover, and the director’s first encounter with the newly inaugurated President Nixon (Christopher Shyer) is inexplicably kept off screen — it’d be great to see him finally run into someone as ruthless and paranoid as himself. The main problem, though, is Eastwood’s dithering over whether this film is a gay love story or a historical pageant. To the latter end, we’re shown Edgar bullying Attorney General Robert Kennedy (Jeffrey Donovan), ensuring the deportation of anarchist leader Emma Goldman (Jessica Hecht), and consulting Charles Lindbergh (Josh Lucas) over the kidnapping of the aviator’s baby. These give a sense of what Hoover accomplished but not why he became such a figure of awe and fear in the larger culture. The unvarying low emotional temperature of these scenes turns this biopic monotonous.

The only time the movie explodes into life is when Edgar’s stated desire to marry a woman precipitates a violent lovers’ quarrel with the wounded Clyde, who lays into Edgar as a “scared, heartless, horrible little man.” Hammer is fantastic, and he steals this movie clean away from DiCaprio, who gives essentially the same performance here that he gave in The Aviator, as an old man jealously hoarding power and seeing threats and conspiracies around every corner. The burst of emotion in that scene is gratifying, but it stands out the more because everything around it is so dull. J. Edgar could have been an important reckoning of the creator of the modern FBI and how his creation was used for good and ill. Instead, it’s just another sign of a filmmaker’s deepening artistic decline.