One of the big stories at last winter’s Sundance Film Festival was Martha Marcy May Marlene. This low-budget psychological thriller turned heads even before the news surfaced that its hitherto unknown lead actress, Elizabeth Olsen, is in fact the taller, more mature-looking younger sister of the Olsen twins. Seeing it now, the film falls a tad short of the hype, but it does showcase the sparkling new talent of the younger Olsen herself. 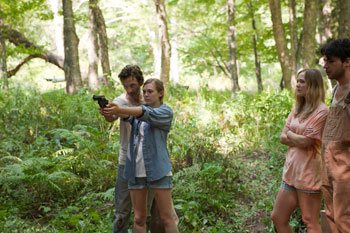 The names in the title all refer to the same woman-child played by Olsen. Her given name is Martha, but she was known as Marcy May inside the religious cult that she lately belonged to. The meaning of “Marlene” only becomes clear late in the proceedings. The movie begins with Martha fleeing the cult’s commune in upstate New York and distraughtly phoning her estranged older sister Lucy (Sarah Paulson) for help. Lucy brings her to the palatial Connecticut lake house that she’s renting with her new British husband Ted (Hugh Dancy), with whom Lucy’s trying to start a family. The narrative then shifts back and forth in time between the past, when Marcy May fell under the cult’s spell, and the present, as Martha struggles to adjust to the rhythms of her sister’s well-heeled life.

Even accounting for Martha’s generally withdrawn demeanor and her unwillingness to tell her sister where she’s been or what she’s been up to in the previous two years, it still seems like Lucy and Ted don’t react properly to some ample psychological warning signs from Martha, who casually walks into their bedroom and sits down on the bed where they’re having sex. (“It’s a big bed,” Martha says vacantly. “I’m on the other side.”) Lucy and Ted are meant to be blinkered materialistic strivers, but writer-director Sean Durkin does shoddy work characterizing them. Convenient though it is for the plot, it makes no sense that they’d be so incurious, nor that Martha would fail to come clean once she comprehends that Lucy and Ted are in danger from her fellow cult members. What could have been a powerfully tragic work of art becomes overdetermined and glib because Durkin stacks the deck.

Still, this is a technically impressive debut for the first-time filmmaker. Notwithstanding a few missteps such as placing a dull roar on the soundtrack to indicate Martha’s disorientation (a trick used to much better effect in Black Swan), Durkin toggles skillfully between the timelines here and manages a slow-rolling sequence when the cult members burgle a rich man’s house only to be surprised by the homeowner. The movie’s final shot ends at an unexpected but completely logical point.

The director also shows a fair understanding of the dynamics of cults. Marcy May becomes victim of, then accomplice to, some foul sexual misdeeds in service of cult leader Patrick (John Hawkes), and these are rendered unwholesomely enough to make you want a hot shower afterward. The queasy feel extends to a sequence in which Patrick teaches Marcy May how to fire a gun in the woods. (“Imagine someone who’s hurt you,” he counsels. “Feel the tension leave your stomach and move up to your index finger.”) The violence, sexual and otherwise, that floats free in the air here makes this movie a rather harrowing experience.

Martha/Marcy May seems to have been reduced to a mindlessly obedient slave by cult life, yet both inside the cult and outside it, she shows hints of a lively intelligence and sense of humor as well as a lethal perceptiveness. Late in the film, when Lucy gives up and announces that she’s washing her hands of her sister, the cowering Martha suddenly rears up and frostily tells her, “You’re going to be a terrible mother,” wounding words made even more so because they’re likely true. It’s hard to play such a fragmented personality and make it feel like each of the shards is emanating from the same person, and yet — much like Natalie Portman in Black Swan (which this movie somewhat resembles) — Olsen pulls off the trick somehow. This character who often comes across as being somewhere else is conjured so indelibly that the whole film takes on an uncanny air because of it. Not all of Martha Marcy May Marlene might stick in your memory, but the slippery, sharp, mentally troubled girl named in the title probably will.