The financial success of last year’s Valentine’s Day inspired director Garry Marshall and screenwriter Katherine Fugate to team up for yet another star-packed omnibus comedy themed around a holiday. New Year’s Eve takes place in New York on Dec. 31 instead of L.A. on Feb. 14, and even though it has even more stars, it’s so sloppy and formulaic that it makes its unremarkable predecessor look like a luminous comic masterpiece. I reviewed Valentine’s Day by ranking its many plotlines. I’m doing the same here, but in the New Year’s spirit, I’m counting down. From least interesting plotline to most, here’s what happens: 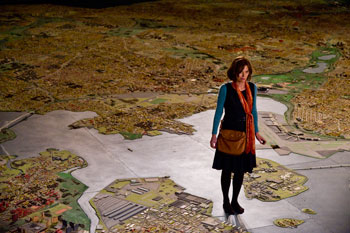 Eight! An expecting couple (Seth Meyers and Jessica Biel) have their eye on a cash prize for delivering the year’s first new baby, only to encounter another equally expectant couple (Til Schweiger and Sarah Paulson) at the same hospital. The race to induce labor is supposed to be funny, but it’s creepy instead, and not even Meyers’ ad-libbing (“No one wins when pregnant women fight!”) can redeem this.

Seven! One-named rock star Jensen (Jon Bon Jovi) is booked to play Times Square and other gigs on the 31st, but he’s more focused on reconciling with Laura (Katherine Heigl), his pissed-off ex whom he ran out on and who just happens to be working as a chef at a party he’s playing. The leads and the writing are bland, but as Laura’s sous chef, Sofia Vergara and her tired hoochie-mama shtick make this downright irritating.

Six! Stranded by a car accident in Connecticut, record mogul Sam (Josh Duhamel) has to hitch a ride with his pastor (Sean O’Bryan) and his large family to make a romantic meeting in Manhattan. If the point of this is that the rich dude discovers that working people aren’t so bad to hang out with, it all fails massively.

Five! During her first year in charge of the Times Square festivities, Claire (Hilary Swank) faces a crisis when the famous ball gets stuck on its way up and has to be repaired before midnight. No prizes for guessing how this turns out, and Swank is comedically inert as usual.

Four! One of Jensen’s backup singers (Lea Michele) is stuck in an apartment elevator with a New Year’s-hating unemployed artist (Ashton Kutcher) in a dreary meet-cute. Glee viewers know what a resource Michele’s singing voice is, but somehow this movie squanders it on a couple of undistinguished rock covers and a slowed-down version of “Auld Lang Syne.” Not good.

Three! Dying hospital patient Stan (Robert De Niro) pours out his lifetime of regrets to a sympathetic nurse (Halle Berry) while wishing he could go up on the hospital roof to see the ball drop one last time. The comedy tries to tug on our heartstrings here, but neither it nor De Niro earns it.

Two! Instead of staying home on New Year’s as usual, 15-year-old Hailey (Abigail Breslin) wants to go to Times Square with her friends, only her vaguely overprotective mom (Sarah Jessica Parker) won’t let her. Breslin’s restless performance helps this storyline. So does the role’s acknowledgment that Breslin isn’t a little girl any more, though I wish it acknowledged that more elegantly than having Hailey lift up her shirt and point to her bra for her mom’s benefit.

One! A downtrodden clerical employee at Jensen’s record label (Michelle Pfeiffer) quits her job and bribes a package courier (Zac Efron) into making all her New Year’s resolutions come true in one day. The courier turns out to have imagination and a suspicious amount of pull with various businesses, but the story works thanks to the chemistry between the still-spry Pfeiffer and Efron, who’s unrecognizable with facial hair and a short haircut and is charming here in a more grown-up way than we’ve seen from him.

Happy New Year! There are even more celebrity cameos sprinkled throughout the film, and the plotlines are connected in ways that are meant to be surprising but aren’t. All in all, New Year’s Eve offers so little entertainment value that the closing credit sequence, which includes outtakes from the shoot, is funnier than the rest of the movie. That should tell you all you need to know.