Every year around this time, I convince myself that this is going to be the year when I get in shape, finish that novel I never started, and do a few other things that I’ll likely put on the back-burner again. Following up on New Year’s lists is just not something I’ve ever been good at. So this year, instead of kidding myself, I’m only going to make food-and-restaurant-related resolutions. I figure any resolution that indulges my gluttony is money in the bank. 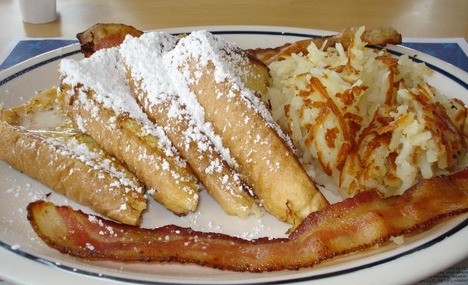 First vow: Eat breakfast more often. I recently joined my grandparents (and lots of other grandparents) at Paris Coffee Shop (704 W. Magnolia Ave.) for a glimpse into life in the slow lane (with my turn signal on). The French toast with bacon ($4.50) may not be the height of culinary achievement of Western civilization, but it was filling and inexpensive. I felt like a kid again, drowning strips of bacon in syrup, listening to my grandparents talk about the ruinous state of the world.

I wasn’t going to let one blah breakfast deter me. Next stop was Café Brazil (2880 W. Berry St.), which I’d never been to though it’s been open a while. No help here for resolution-keeping, though: I ate an uninspired and poorly executed Brazilian breakfast ($7.99), featuring two eggs over easy, an undercooked, doughy empanada topped with a zesty cream sauce and cheddar cheese, served with rosemary potatoes, a raw jalapeño pepper, and thick, fresh homemade white bread. The highlights were the crispy potatoes and the bread (it’s never a good sign when the bread is the most memorable component of a meal). For what it’s worth ($2.69), the coffee was excellent.

I had better luck on dining resolution No. 2: eating healthier. I’m not suggesting I’m going to quit eating gravy cold turkey — the gravy shakes will rattle your fillings — but I could stand to back off on the carbs and sugar. I made a great start at Café Daireds (2400 W. I-20, Arl.), which is housed inside a spa and salon. The menu gives the nutritional facts of each item, and the café employs a dietician and an obviously talented chef. It’s an admittedly odd setting, but the setup and sleek, colorful décor do a good job of distracting you from the fact that people are getting their hair cut in an adjacent room just a few feet away.

The unique, eclectic menu pops with meticulously composed dishes that will have diners reaching for their cell phone cameras. And it tastes as good as it looks. The crepes ($10.25) were a standout, filled with sautéed mushrooms, spinach, rosemary goat cheese, and grilled chicken, and served with a side salad. The whole dish totaled 419 calories — does that mean I can order two of them?

Finally, I resolve to do more exploring. In the past, I’ve mined restaurant gold by just picking an area and driving through it. East Fort Worth is like a culinary orchid I’ve let wither on the vine. Earlier this year, on my way to Sweet Georgia’s (3914 Miller Ave.), I must have passed half a dozen places that I meant to try but never did. The same can be said of the North Side; the cities of Hurst, Arlington, North Richland Hills; and other places. Look out, here I come.

They say a new year is a clean slate, but I prefer to think of it as a clean plate, and I intend to clean every breakfasty, healthy, adventurous plate that comes my way.