Photographer, sculptor, and mixed-media canvas artist Robert McAn says that if you look hard enough at some of his work, you can probably find the influence of Duchamp, Magritte, and other art school gods. But McAn insists he’s not an intellectual artist and is as much influenced by what he calls “the daily visual information” that comes his way. As the longtime membership and special events manager at the Kimbell Art Museum, he’s surrounded by striking visual info all day long, of course. But McAn claims that his relationship with his father — and his father’s eccentric relationship with found objects — has been a major inspiration. 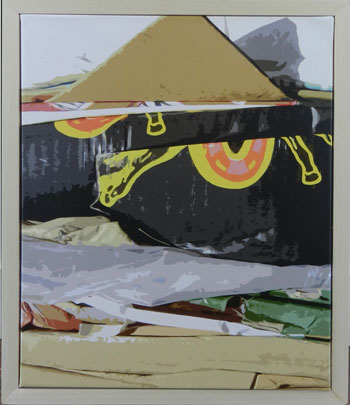 “My father loved picking up things off the road,” said the Fort Worth native. “He had a garage full of tools, buckets of nails, old electronic equipment, that sort of thing. He was always working on a project that he needed help with, so he’d come and get me. But the projects never seemed to get finished. As an artist, I’ve tried to recapture that feeling of letting the materials guide me.”

McAn’s new one-man show at William Campbell Contemporary Art, Implied Landscapes, attempts to find unlikely beauty and harmony in one of the most mundane and unappealing materials on the planet: cardboard. His fascination with disposable materials started about five years ago, when he began shredding his personal documents — bank statements, mortgage documents, tax information — and attaching the tiny colorful strips to canvases. These were self-portraits, he insisted, a comical re-owning of the way government and business identified him as an anonymous stack of paperwork. Several examples are in the current show.

The most prominent works  in  Implied Landscapes, however, are giclée prints — commercially reproduced digital images created by ink jet printers — featuring photos of cardboard box surfaces touched up with paint here and there. The boxes were bundled up and ready to be shipped off to the recyclers when McAn discovered them behind his neighborhood Wal-Mart and snapped their images with his digital camera. The results are oddly serene, warmly hued layers of rough, organic  lines  and  curves and commercial logo images, including birds, bottles, and women’s faces. The pieces resemble not just abstract landscapes but cross-sections of archaeological digs: ad imagery and disposable materials gradually decomposing into jumbled strata of textures and half-forgotten symbols of pop culture and American capitalism.

McAn earned an MFA in photography and painting at the University of North Texas, where he studied  with the influential and controversial Fort Worth painter Vernon Fisher. McAn said Fisher had a huge impact on his work, though more philosophically than stylistically.

“He was brutal and brilliant and audacious,” McAn said. “He’d tear you down for the purpose of building you up, to make you really think about your work. I still credit him for helping me understand that an artwork has to be placed within its own culture.”

Ideas of consumption, mass production, and waste in American society are very much represented in Implied Landscapes. Refreshingly, McAn doesn’t take the predictable artist’s route and make some kind of anguished cry about Wal-Mart raping the culture. In fact, Wal-Mart probably is raping American culture, but McAn readily concedes that he’s a consumer who likes great bargains, too, so he implicates himself as much as any greedy corporate bigwig. He’s more interested in examining the dynamic of business-consumer interactions than offering solutions — though he certainly hopes his work will inspire conversation about how much waste we generate during our lifetimes.

Lest you think McAn harbors a hatred of money, the Implied Landscapes show also includes examples of his beloved small-scale tree sculptures. They’re his best-selling works and what collectors most identify with him. Using dried tree branches and railroad hobby materials, he creates tableaux of tiny but finely detailed buildings, people, and animals arranged with spindly trees that evoke whimsy and strangeness simultaneously.

“I would’ve retired them a long time ago if people didn’t want them,” he said. “They’re sort of smart and dumb at the same time. You can immediately figure out what’s going on, but there are also meanings that take you off in different directions.”

His voice full of self-deprecating mischief, he added, “They’re easily placed in someone’s home. There’s always a wall that needs a vertical piece.”