Do better next year, Hollywood. That’s how I feel as I look back on the movies of 2011. American films dominated my Top 10 lists the last two years, but this year both Hollywood and the indies consistently fell short, their best efforts attaining respectability rather than greatness. So if you haven’t heard of some the movies on my Top 10 list this year, I’m not proclaiming that my taste is superior to yours. I’m commenting on how poorly American filmmakers performed this year relative to the rest of the world, not to mention how poorly film distributors have served you. (To take just one instance, No. 4 below never played in theaters in Dallas, let alone Fort Worth.) The best films of 2011 took some finding. 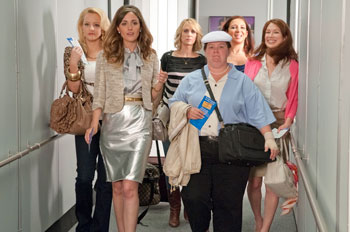 As usual, movies that have yet to be released in North Texas are denoted with an asterisk (*). You can log onto Blotch and see my lists of the year’s best in documentaries, performances, and other categories that I think worth mentioning. Oh, and if the eight Harry Potter movies could be considered as one big film, it would come in at No. 5 on this list.

1. Bridesmaids. Take away the wedding climax and the set pieces involving food poisoning and slapstick sex, and what you have here is a drama as complex and closely observed as any Mike Leigh film, with Kristen Wiig (coming into her own as an actor and writer after years of being an underused player in comedy movies) unquietly seething as a hard-luck case watching her peers make more money and have better relationships. The fact that Paul Feig’s comedy also happened to be the funniest movie of 2011 just makes it all the more powerful and moving as a testament to how complicated your relationship with your longtime best friend can become.

2. Drive. The kiss in the elevator! The scorpion jacket! The crunch of bones underneath a hammer! The Albert Brooks! There’s so much stylish and stylized awesomeness in Nicolas Winding Refn’s work of crime fiction/1980s pastiche that we almost don’t need the car chases. Yet those are here as well, helping to generate the movie’s nausea-inducing levels of suspense that set up its moments of spectacularly violent release. Ryan Gosling’s unflappable, almost inhumanly cool antihero holds together the extremes of this operatic, intoxicating, romantic thriller.

3. Shame. This austere, unflinching, relentless march into the hell that is sex addiction proved too grim for some people. Yet the film’s visual rigor and skillful depiction of its upscale Manhattan setting keeps it from becoming overly depressing, as do the notes of humor and grace (like Carey Mulligan singing “New York, New York” in a nightclub) provided by up-and-coming British director/co-writer Steve McQueen. The real propulsive element here is Michael Fassbender’s raging, tormented performance as a damaged man filled with curdling thwarted love that he can express only in ways that wound him.

4. Uncle Boonmee Who Can Recall His Past Lives. During a banner year for deliberately paced philosophical meditations on the mysteries of human existence, this Thai film turned out to be the best of the lot. Apichatpong Weerasethakul’s piece about a monk who journeys to the countryside to nurse his terminally ill uncle is uncanny, lush, intensely beautiful, and illuminated by both traditional Buddhism and animism. As the old man serenely faces his end, the borders between our world and the next dissolve, and ghosts and jungle spirits (who discuss photography with him) prowl the night. If you’ve never seen anything by this filmmaking giant, this friendly and accessible work is a great place to start.

5. Attack the Block. In a year when disaffected youths torched Britain’s major cities, could it be that the movie that understood them most deeply was this comedy about an invasion of space aliens? Oh, yes. Joe Cornish’s inspired, hilarious sci-fi flick is about a group of petty London street thugs (and one of their middle-class mugging victims) who save the world from large, vicious, eyeless, four-legged creatures with bioluminescent jaws, but it also comments trenchantly on the drug trade, poverty, and British race relations. The movie is even better seen on DVD, where the English subtitles can make the thick accents and copious amounts of British slang decipherable to Americans.

6. Meek’s Cutoff. Kelly Reichardt’s female-centric Western starts out as a tense character study of a group of 19th-century settlers who are strained to the breaking point by hardship and dehydration. However, this hypnotic, slow-rolling work turns into an odder and more existential journey before it’s over, led by Michelle Williams’ titanic performance as the settlers’ tower of moral strength. The deserts of eastern Oregon and Jeff Grace’s impassive percussion score form an otherworldly backdrop to this story of heroism, venality, and the clash of white and native cultures. For patient viewers, this often strikingly beautiful film pays handsome dividends.

7. Weekend. In the proud tradition of Before Sunrise and Once, this British gay drama starts with two guys (Tom Cullen and Chris New, with all the chemistry of a great screen couple) hooking up in Nottingham and then discovering that what they meant to be a chance sexual encounter has blossomed into a near-mystical union of souls. Andrew Haigh’s entrancing debut film feels properly thrown together and improvised, but its youthful passion and its heart-rending parting of ways at the end give it the air of a lifetime of romance packed into a little less than 48 hours. Maybe that’s why this small film seems to take in so much.

8. The Artist. Granted, Michel Hazana-vicius’ homage to old Hollywood does stand out by virtue of being the only silent black-and-white movie out there that features tap-dance numbers. Still, even if it didn’t have that gimmick, this enormously charming tale of a silent film star who falls victim to technological progress and his own ego would still retain its power, thanks to Jean Dujardin’s lead performance and Ludovic Bource’s emotive score. That this movie convincingly depicts a celebrity brought low and yet manages to end credibly on such a joyous note is little short of magical.

9. Elite Squad: The Enemy Within. A sequel to a far-inferior 2008 film, this Brazilian cop thriller is like a season of The Wire condensed into two action-packed hours. Writer-director José Padilha doesn’t stint on the shootouts and chase scenes, but he also delivers a clear-eyed look at the roots of corruption and crime in his nation — from the capital in Brasilia to the streets of Rio de Janeiro — and all the reasons why there are no quick fixes. Anchoring it all is Wagner Moura’s troubled performance as a high-ranking Rio officer trying to clean up the crooked system that owns him and keep his angry teenage son from drifting away.

10. Rango. Let’s be honest: If this dizzyingly inventive and weird animated Western had been made by a Japanese filmmaker, there’d be more people singing its praises. Instead, Gore Verbinski’s hallucinatory fable about a chameleon searching for his identity in the middle of a Chinatown-style plot about hoarding natural resources had to settle for a nine-digit take at the box office and the love of people who, like me, can’t resist mariachi songs of death sung by owls in sombreros. It didn’t even need 3D to make an impact. Just because this kids’ movie came out of Hollywood is no reason to overlook its abundant, outsizedly eccentric creativity.