Fort Worth’s Code Compliance Department will present the city council with a new tall-grass policy in a few weeks and suggest some tweaks to the grass ordinance, which regulates things like plant placement and height. As residents and businesses move toward use of native grasses to conserve water, code officers are wrestling with where to draw the line between encouraging xeriscaping and discouraging people from letting yards grow unattended. 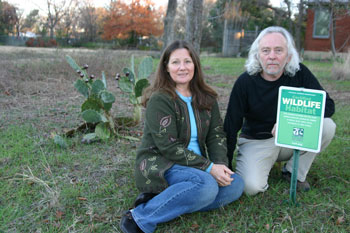 This dispute has played out citywide in recent years, but nowhere more interestingly than in East Fort Worth at the home of Debora and Don Young. The Youngs just finished a five-year court battle that exposed a technicality in the city ordinance and appears to have opened a legal loophole big enough for a lot of wildflowers — or weeds — to shoot up through. A Tarrant County judge’s ruling in December could be interpreted to mean Fort Worth residents can toss their lawnmowers and quit cutting their yards altogether.

In 2006, Code Compliance officers responded to anonymous complaints about high grass in the couple’s front yard. The Youngs are environmental activists who co-founded Fort Worth Citizens Against Neighborhood Drilling Ordinance (FWCanDo) in 2005, and established the annual Prairie Fest at Tandy Hills Natural Area.

They live across the street from Tandy Hills, a prairie preserve near the intersection of Beach Street and I-30. The park offers more than 500 different species of native plants. Over the years, Don Young has turned his front yard into a small replica of the preserve. Various wildflowers and grasses dominate the lawn. He edges the perimeter and keeps portions of the yard manicured, but the bulk of it grows wild and untamed. Grasses include bluestem, switchgrass, and sideoats grama.

“We’ve just gathered seeds from across the street and spread them around the yard and waited for nature to take its course,” he said.

Young thought he was being environmentally conscious. The city encourages drought-resistant landscaping that reduces water usage and maintenance. Young never has to water his lawn. But code officers told him his wide diversity of turf grasses and wildflowers weren’t structured or bordered, nor exempted as “decorative,” such as pampas grass. Young had violated a city ordinance restricting grass height to 12 inches.

He pointed to the National Wildlife Federation sign that designates his yard as a wildlife habitat and explained that much of the grass in his yard is sideoats grama, the state grass of Texas.

“I let anything grow if it was native,” he said. “I didn’t try to pretty it up. We’ve had rabbits, roadrunners, rat snakes, and all kinds of things living there.” Which is partly what the city is worried about.

The yard is naturally pretty at times of the year when grasses and wildflowers are flush and standing about 20 inches tall. At other times it looks brown, overgrown, and untended.

“We got a complaint, which is typical of tall grass — most of our tall-grass complaints come in from a neighbor concerned about the unsightliness or concerns over rodents, bugs, or pests,” said Code Compliance director Brandon Bennett.

Young received a citation for having grasses taller than an average 12 inches. He contested his ticket in municipal court on Dec. 7, 2006. The city judge ruled against him and fined Young $315.

Young appealed the verdict. He got a lawyer buddy, Tom Carr, to represent him, and the case began a snail’s-pace crawl through the appeals process.

“Generally I don’t do traffic citations or city ordinance citations, but Don has been a friend for a long time, and I saw what he’d been cited for and thought it was ridiculous. His yard was specifically designed in several respects,” Carr said. “First off, he’s used plants almost identical to the plants across the street in the park. Secondly, he mowed the back yard and a good portion of the front yard. He kept the borders of his yard neatly trimmed.”

Carr’s appeal claimed the city ordinance was vague and ambiguous. Specifically he focused on a single word — the city forbids weeds or grass from exceeding  an “average” of 12 inches.

The code officer measured only one clump of grass in Young’s yard to determine its height. “Average,” however, denotes that several items were measured and the mean height of all of them determined. Carr didn’t think the city enforced the ordinance correctly.

Carr noted that many properties, including some near Young’s house, feature large clumps of pampas grass that can grow 10 feet tall. Allowing ornamental grasses while clamping down on native grasses is exclusionary, he said.

“Beauty is in the eye of the beholder,” Carr said. “When you’ve got acres and acres of wildflowers and wild grasses across the street and then you look at his yard and say it’s an eyesore, that’s ridiculous.”

Determining the difference between xeriscaping and lack of maintenance can be tricky. Code Compliance began revising the policy in 2008 to allow xeriscaping within defined standards. For instance, Bermuda, St. Augustine, and other turf grasses “cannot exceed 12 inches in height.” The word “average” was removed. Clear borders must be maintained, and wildflowers cannot be taller than 18 inches.

Under the new policy, Young’s yard would still be in violation at certain times of the year when the grass is at its highest.

“You can’t just let your yard overgrow,” Bennett said. “Your yard has to have some continuity with the other yards in the neighborhood.”

Young wants drought-resistant native prairie grasses to be exempted. The city’s insistence on continuity and low-cut landscaping encourages homeowners who plant non-native grasses such as St. Augustine and water all the time, while discouraging xeriscapers, he said.

“To me the case was always about being able to grow native, more sustainable plants that use less or no water and to mow less or not at all in an effort to help keep the air cleaner and produce less noise and dust,” he said.

With spring — and fast-growing grass — just a few months away, Young is prepared to fight the battle all over again. He said he won’t cut his native grass.

“I understand the city’s challenge because there are a lot of people who will say, ‘Hey, I can get away without mowing my yard,’ ” Young said. “But they should make exceptions for certain grasses. They should be bolder and not try to make the policy so simple and to take account of what naturally grows here.”