At first glance, the Sunday night event at Mambo’s Tapas Cantina in downtown Fort Worth didn’t seem to have much to do with a church service. People of varying ages filled the tables, where Shiner Bock bottles and cocktails shared surface space with chips and salsa. A loud rock band on a small stage was emphasizing reverb rather than melodic hymns.

In the middle of it all, a man in a flannel shirt got up on stage with a glass of red wine and a large bread roll on a plate. Neil Christopher, pastor of the Kyrie Fort Worth church, offered a prayer and asked the crowd to assess how their thoughts and dreams and hopes at this time of year could help others in the community. 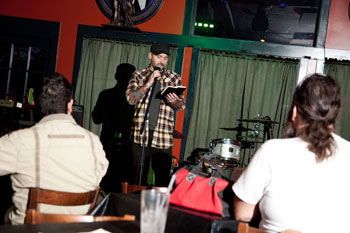 Then Christopher invited people to come up and receive bread and wine, the symbolic body and blood of Christ. “This is an open communion,” he said. “We do not judge you on any merits of being worthy or not. If you want [communion], we’ll give it to you.”

For the past eight months, Christopher has been presiding over the services on the firt and third Sundays of the month. Kyrie refers to “kyrie eleison,” Greek for “Lord have mercy.”

About 40 to 50 people usually come, but crowds seem to be growing as word spreads about this alternative worship experience.

Christopher doesn’t embrace the alternative tag. “We are inclusionary, and that includes some who might be considered mainstream religious,” he said. “Our goal is to have a place where people can find a community that has some meaning to them.”

In some ways, the mainstream church hierarchy has embraced what Christopher is doing in this bar. Some of his most ardent supporters are pastors of traditional local churches. They note that church attendance has been dwindling for years and agree that getting the message of the Bible out requires going where the people are, not waiting for them to come to a particular church.

“I don’t worry about where people hear the message,” said the Rev. Erik Gronberg, pastor of the Trinity Lutheran Church in Fort Worth. “We all know that young people aren’t coming to church. We are supporting Neil in these services because he is not dumbing things down … . His message is very substantial.

“What he is able to do is take the teachings of the Bible and make them real,” Gronberg said, from “how to deal with family to making a difference in your community to having a sense of love for yourself and others.”

Christopher’s decision to hold church services in a restaurant/bar was mostly happenstance. The heavily tattooed 36-year-old, whose father is an Assemblies of God minister, grew up in Canada and studied theology at the University of Saskatchewan. After college, he took jobs with various churches, from Canada to Arizona, mostly as a youth minister. Christopher said he moved often because he was unsure about what denomination he fit in with.

Two years ago, he took a job with Rejoice Lutheran Church in Frisco. While looking for a place to live, he fell in love with Fort Worth. “I just liked the vibe of Fort Worth, the independence and the music and art scene that was growing,” he said.

He was also getting disenchanted with the larger churches where he’d worked. “The mega-churches can be insane,” Christopher said. “They don’t develop any real community where people can direct what they have learned from Bible study into projects that affect their lives and others.”

Christopher, a smoker and a beer drinker, found that he enjoyed discussing religion and church activities with musicians, artists, and other pastors in bars every so often. “I just didn’t think you needed to be sitting in a church pew on a Sunday morning in order to worship,” he said.

Through some friends, he met the owners of Mambo’s, who offered him use of the place for free (it had been closed on Sunday nights). “We had no immediate goals,” Christopher said. “Thought meeting in a bar on a Sunday night might be something fun to do. But now we are looking more for a purpose, getting involved more with social programs and charity events.”

He makes no money as pastor at Kyrie, an independent nondenominational church that doesn’t pass around a collection plate. Christopher was ordained in December by the Tennessee-based Anchor Mission USA church, a nondenominational group that also preaches inclusion. He is working with a local glass sculptor to help pay for his rent and food costs.

The church has been granted nonprofit status, but Christopher said there are no plans to move it into its own building. And the only negative response he has received from conservative Christians, he said, relate to Kyrie’s insistence that the church “is an inclusive, interdenominational gathering that welcomes anyone from any walk of life, race, culture, or sexual orientation.” He said some people have told him that his teaching that his congregation must be “gay affirming” goes against Christian beliefs.

Other Fort Worth religious leaders think the church establishment is too worried about gay issues.

“Being seen as gay-friendly … is just an excuse to label people on one issue,” said William Winston, a retired Episcopal priest who regularly shows up at Kyrie services. “We, as churches, do not need to promote the gay lifestyle. But neither should we exclude these people when they are good and loving members of the community.

“And that is what Neil is emphasizing here,” Winston said. “Christ loved people, and he didn’t exclude people from that love. Neil is a connector with all different kinds of people, and he is practicing that part of Christianity … . That was a basic belief in the early Christian church, and some have gotten away from that over time.”

At the recent Sunday night service, local pastors drank their beer at one table, while fans of the band Drift Era sat close to the stage. A group of high school cheerleaders wandered in for dinner after competing at the Fort Worth Convention Center across the street.

Sitting near the cheerleaders was a family of four. Darrell and Susan Shewmaker of Indiana were visiting their daughter, Kathleen Shewmaker, and their niece, Natalie Levings, both 20-something civil engineers. Kathleen decided to take her parents to the Kyrie service after reading about it on the church’s web site.

“This is the first time we’ve been here, but you can see that there is a unique and different group of people who came out tonight,” Kathleen said.

Darrell and his wife are Lutherans  — “mainline conservative” — who have attended the same church for decades.

“But I don’t have a problem with the approach they’re using here,” he said. “The message is not that different from the message you would hear in most churches. I like the way they emphasize getting involved in your community and helping others.”

For Natalie Levings, the appeal is simpler. “Beer and church work together fine by me,” she said. “And not having to do it early on a Sunday morning is a big plus.”