Whether it’s some sort of backlash, the inevitable byproduct of a male-dominated system, or just a coincidence, our multiplexes are currently being overrun by fantasy adventure films with young men at the heart. Next month’s release of The Hunger Games will restore the gender balance, but for now, let’s ring up the accomplishments and shortcomings of the three movies in our theaters.

The 2008 version of Journey to the Center of the Earth inaugurated a new age of 3D films, and in the four short years since then, its 3D effects have been left in the dust by the likes of Avatar and Hugo. Now comes its sequel, Journey 2: The Mysterious Island, and while it doesn’t measure up to James Cameron’s or Martin Scorsese’s 3D stylings, it’s also leaps and bounds beyond what the original offered. At least from a visual standpoint, that is. As far as the story goes, it’s just as forgettable as its predecessor. 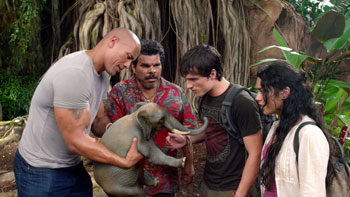 The film begins with Sean Anderson (Josh Hutcherson) receiving a coded radio transmission from his long-lost explorer granddad (Michael Caine). Sean’s mom’s boyfriend Hank (Dwayne Johnson) — who just happens to have been a U.S. Navy codebreaker — helps the kid makes the astonishing literary discovery that the enchanted locale described by Jules Verne in The Mysterious Island is a real place and is identical with the kingdom of Atlantis, Robert Louis Stevenson’s Treasure Island, and Jonathan Swift’s Lilliput. Quicker than you can say “Cyrus Smith,” Sean and Hank are on a helicopter off the coast of Palau that promptly crash-lands on an island populated by miniature elephants and giant bees as well as Sean’s grandpa.

Hutcherson is the only holdover from the original film, and he has grown considerably in stature as an actor thanks to an excellent supporting turn in The Kids Are All Right and landing the male lead in the upcoming The Hunger Games. He gets to show off his athleticism in a couple of chase scenes, but the only time his heart seems truly in his work here is when Sean is trying and mostly failing to impress the chopper pilot’s hot daughter (Vanessa Hudgens) who’s stranded with them. Hutcherson’s far from the only one in the cast who’s off his game; reliable character actor Luis Guzmán turns cartoonish and annoying as the pilot, and Caine camps up the grandfather role to disastrous effect. The Rock makes heavy going of his role, too, but he steals away the movie’s highlight during a quiet scene when Hank strums a ukulele and sings “What a Wonderful World” with lyrics tailored to the situation.

That moment of dexterous light humor is a glimmer of humanity in a soulless film that reduces the creations of several great authors to a chintzy amusement park ride. With all the attention paid to effects, no one bothers to ask basic character questions like how someone as obsessed with lost islands as Sean would fail to recognize a latitude-longitude coordinate. Much like the original, Journey 2 fails to evoke any wonder or beauty in its depiction of a fantasy world. Its lack of magic is depressing.

Chronicle is truly something that we haven’t seen before: a vérité superhero flick that applies the first-person guy-with-a-camera style of The Blair Witch Project and Cloverfield to a new genre. I should be in love with its originality, and I guess I am. It’s the movie itself that I’m less enamored of.

The film begins with bullied Seattle-area high-school loner Andrew (Dane DeHaan) first picking up a camera, determined to film his entire life as a way to protect himself against his abusive dad (Michael Kelly). Yet when his jock cousin Matt (Alex Russell) and BMOC Steve (Michael B. Jordan) find something weird in the woods and ask Andrew to film it, Andrew winds up documenting how the three boys emerge from the woods with the ability to move objects with their minds.

Rather than inspiring heroic deeds, the superpower only encourages these kids to act like adolescent idiots, using their powers to play pranks on shoppers at a toy store and laughing maniacally at Matt’s initial attempts to launch himself off the ground. Such scenes filmed with cheap cameras and pricey visual effects give the movie the feel of a souped-up series of Jackass stunts in its middle section. That’s not a bad thing, and it gives rise to some piquant notes of humor: Hearing that Matt is practicing levitating increasingly heavier objects, Steve seamlessly responds, “Yeah, I’ve been lifting weights too.”

A neat touch comes when Andrew figures out how to telekinese the camera, resulting in more fluid camerawork and shots that an ordinary human wouldn’t be able to get. These are nice, but they play into the flaw that dogs this movie’s final third, as Andrew uses his power to go all Carrie on his dad, his schoolmates, and the city of Seattle. The smooth way it all plays out is too reminiscent of other superhero flicks, and it runs counter to the film’s aesthetic. Other pieces of vérité entertainment from The Blair Witch Project all the way down to the Paranormal Activity films make themselves convincing by hinting at incidents happening off camera and things that aren’t being picked up. Here every backstory detail is neatly filled in, largely through another character who also films everything in her life — Matt’s ex-girlfriend (Ashley Hinshaw), who’s posting video to her blog. More raggedness would have helped us believe in this story. Chronicle is a noteworthy development in film history, but it’s really just the same old story packaged in a new wrapper. It’s an eye-catching wrapper, though.

The Woman in Black is Daniel Radcliffe’s first post-Harry Potter role, and while he doesn’t embarrass himself, neither does he do much other than look gloomy. Of course, the role doesn’t allow him to do much more, but judging by his well-regarded turn on Broadway and some zesty performances on various TV shows, comedy might be a better direction for him to go than this period horror flick.

The film takes place at some point during the 1910s, when a recently widowed, borderline suicidal young lawyer named Arthur Kipps (Radcliffe) is assigned by his London firm to travel to the remote northeast of England to sift through the paperwork at a deceased client’s estate. Working alone for long hours in a mansion full of dark corners and locked rooms, Arthur has visions of a deathly pale, black-clad woman ghosting about the grounds and the house. Each time he sees her, one or more of the children in the nearby village are moved to kill themselves.

The film is based on a novella by Susan Hill, which gained popularity in the 1990s when adapted to the stage by Stephen Mallatratt. (Circle Theatre put on the play to terrifying effect some years ago.) Compared to the stage version, the movie takes too long to build momentum. Director James Watkins, who won himself a cult following with his 2008 British slasher flick Eden Lake, makes sure everything looks good, but his sense of horror runs toward dolls in disrepair, rocking chairs that rock by themselves, and objects blasting into the frame. His staging lacks wit, invention, and a feel for the atmosphere. The only element that generates real scares is recent Oscar nominee Janet McTeer, bringing unhinged desperation to the role of the bereaved wife of Arthur’s host.

For some reason, Jane Goldman’s adaptation leaves out the crucial detail of the house being isolated from the mainland at high tide, which would have increased the sense of the hero being trapped on an island with the malevolent woman. Arthur’s herculean attempts to bring the dead woman’s spirit some peace are new to this version of the story. They make him more sympathetic, but they also make nonsensical hash out of the tragic ending.

Watching this handsome but disappointing Gothic thriller, I couldn’t help but think of Jack Clayton’s The Innocents, a 1961 film in a similar vein. That movie also has a woman in black, and late in the film we see her standing outside in broad daylight, oblivious to the rain and glaring at both the main character and us. Nothing in The Woman in Black comes close to matching the horror of that.

The Woman in Black