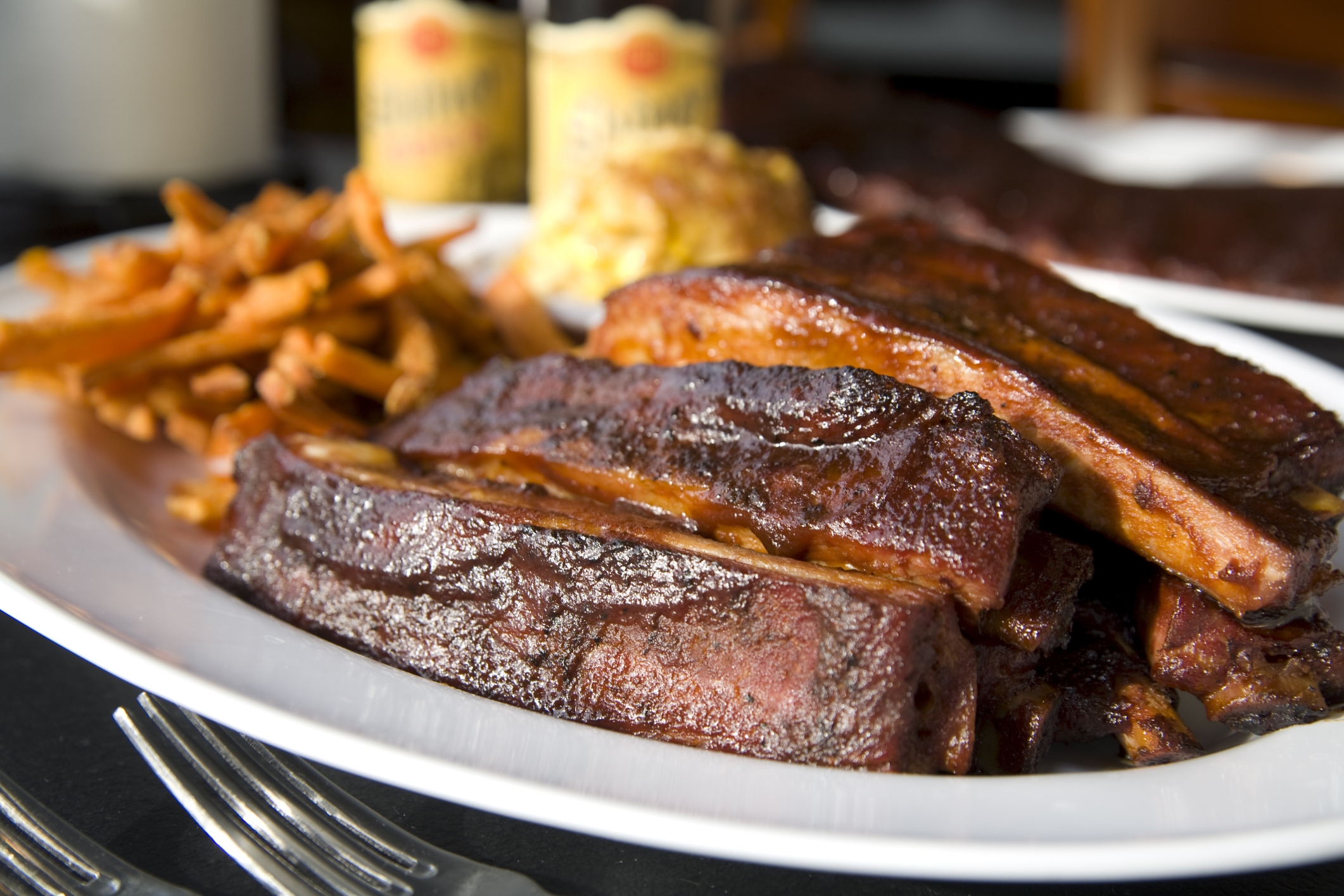 I ran across something of a barbecue conundrum while driving around the Mid-Cities the other day. There are two barbecue “barns” right down the street from each other. I thought it was a glitch in the Matrix, or maybe the North Richland Hills-Colleyville city boundary was like the barbecue Mason-Dixon line.

I imagined the two as rivals, engaging in all sorts of fraternity prank-esque hijinks. … no, stop with the invented drama. For Pete’s sake, I thought, just go eat there. So I did — I went barnstorming, you might say, to settle once and for all which one is better.

The Red Barn Bar-B-Que (4913 Colleyville Blvd., Colleyville) just looks like my kind of place. Inside, it has that bait-and-tackle-store aesthetic. Outside it’s red and planked — you know, barn-y. It’s a pretty simple operation. Everything is served on paper or in Styrofoam, and you go through a line to order.

On a recent weekday lunch hour, the line wasn’t long, and my guest and I were served by two very nice young fellas who weren’t in any particular hurry. But I was, as was my guest, so we were off to a bad start.

The pork ribs on my ribs plate ($11.99) had a subtle smoky flavor but no crispness, and they weren’t quite falling off the bone — more like sagging on the bone. Both the spicy and the sweet sauces tasted vinegary, although the spicy version had a nice kick. The accompanying onion rings and coleslaw were good, not great. The chopped brisket sandwich ($8.99) was tender, albeit a little bland. The potato salad was really tangy, but very heavy on the mayo. All in all, I gave it a definite meh.

In the other corner is the Big Barn BBQ (8021 Main St. NRH). My guest and I were met in the parking lot by the manager, who informed us we could eat there. Say what? After a who’s-on-first routine, he explained that the restaurant had just expanded its hours to what it says they are on its website. Translation: Technically they were open but trying to close, and the quicker he could feed us and get rid of us, the better.

As it turned out, the quasi-bum’s rush wasn’t a bad deal for us. The interior is pretty standard-issue barbecue joint, but the weather was nice, the patio is big and welcoming, and we had it to ourselves for a while.

The meat selection was vast, as was my appetite. I went for the double meat plate ($12.49), with jalapeño-cheddar sausage and chopped brisket. Both were outstanding, and the spicy barbecue sauce had a nice zing. The accompanying sides — fried okra and hand-cut fries — were decent if not spectacular. I was completely out-ordered by my friend, who went for the fall-off-the-bone crispy ribs and big-as-a-football smoked chicken, with a nice peppery rub. The chipotle chicken macaroni salad, fresh and zesty, won the Best in Show for both eateries.

Turned out, the battle of the barns was barely even a fair fight. Big Barn won, plates down. It also helps that they serve alcohol and have a nice patio, and Red Barn offers neither.

Now that that’s settled, I’m off to mediate a dispute among several restaurants with “Mamma” in the name, to see who has the superior female progenitor. Or maybe just better comfort food.