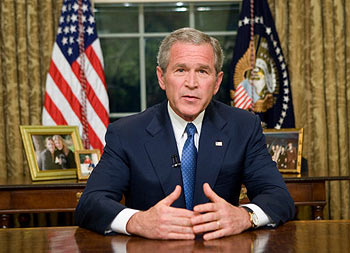 I’ll begin with acknowledging that President George W. Bush is an easy target.

Criticizing the cowboy president that embroiled America in the longest wars in its history and deepest recession since the 1930s isn’t a novel idea. In fact, the former president is so reviled even by his own party that Mitt Romney won’t call him anything but “predecessor” lest he invoke a terrible curse.

So it was some surprise that I read the Morning News’ glowing review, printed on the front page of today’s Star-Telegram, of President Bush’s efforts to fight the AIDS epidemic that continues to rage through Africa. It’s not the first news story that asks African mothers to rate the American president. Associated Press did it three years ago.

I’ll put aside for the moment that the article says there’s still “no consensus” on Bush’s legacy, despite a CNN/ORC poll just four days ago that gave him the lowest approval rating of any ex-president.

But unlike the AP story, which bothered to point out that Bush required a third of the program’s funding go to abstinence education — and has fueled debate since the program’s inception — the Morning News story avoided the debate altogether. The president is a “hero,” the Star-T wrote in its headline.

For a truly bewildering contradiction, check out these paragraphs from the story (my emphasis added):

AIDS was an inferno burning through sub-Saharan Africa. The American people, led by Bush, checked that fire and saved millions of lives.

People with immune systems badly weakened by HIV were given anti-retroviral drugs that stopped the progression of the disease. Mothers and newborns were given drugs that stopped the transmission of the virus from one generation to the next. Clinics were built. Doctors and nurses and lay workers were trained. A wrenching cultural conversation about sexual practices broadened, fueled by American money promoting abstinence, fidelity and the use of condoms.

Apparently, despite overwhelming evidence that abstinence education does nothing to prevent the spread of sexually transmitted diseases, it can prevent Africans dying from AIDS  — well, as long as you hand over condoms with the celibacy syllabus.

I’m not arguing that Bush may not have saved millions of lives, but the AIDS epidemic is hardly over, and it’s equally possible that many more lives could be saved if money spent on injecting sexual Puritanism into African cultures with wildly divergent views on polygamy and fidelity had been spent on more contraceptives instead.

It’s also worth pointing out that when the AP story asked Mark Dybul, the US ambassador of anti-AIDS efforts, to respond to critics of the abstinence portion of the program, he cited the millions of condoms provided to Rwanda, Zambia and Ethiopia.

The DMN story is rich with detail and statistics. There’s a section titled “moral responsibility,” referring to Bush’s noble commitment to the program. That’s all fine. What the story lacks is a section outlining the moral complexity of providing life-saving medication to Africans dying of AIDS while simultaneously requiring them to learn about “being faithful.”

“Until death do us part.”