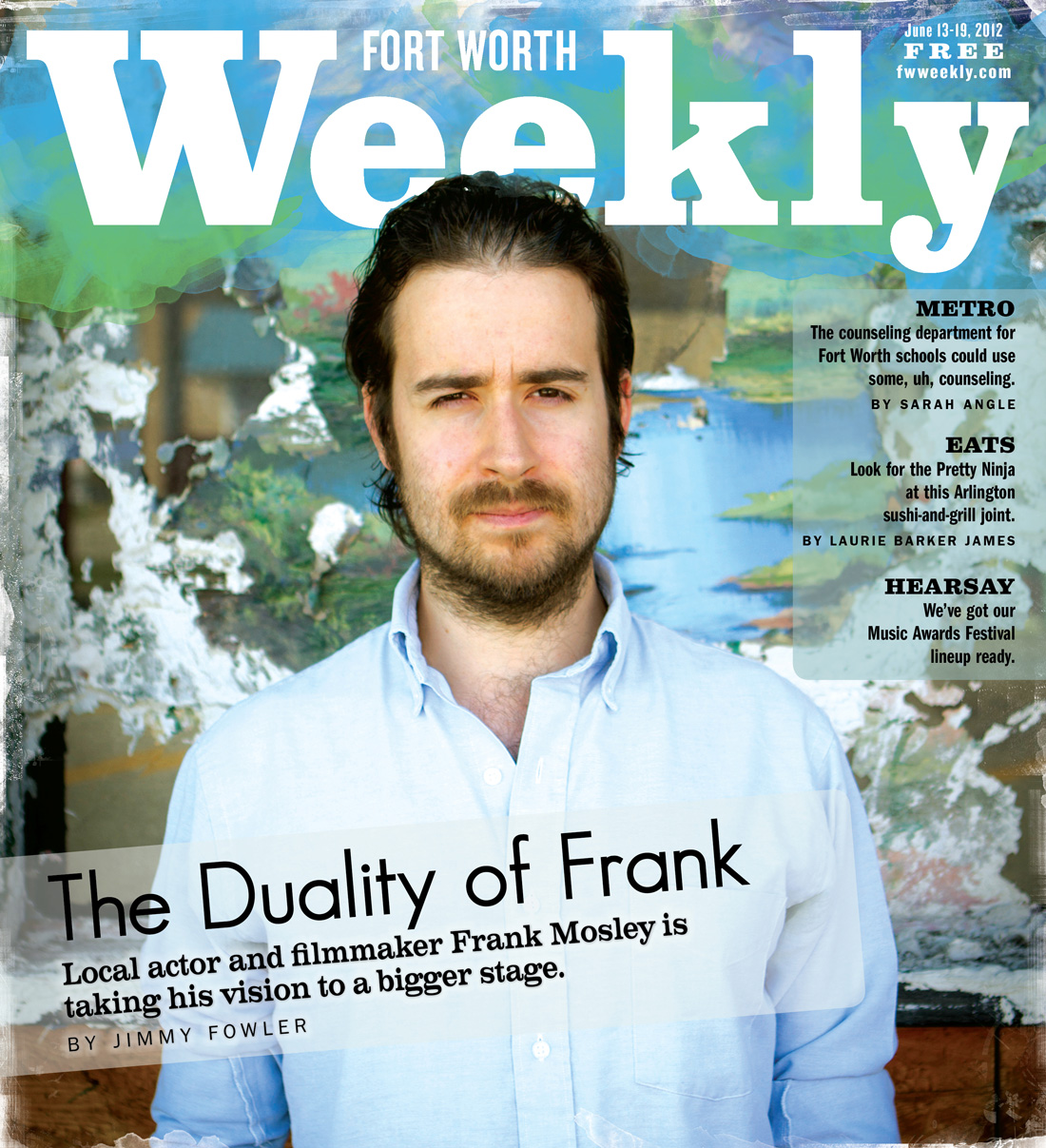 Frank Mosley is always looking for what’s going on behind the eyes — the secrets that two people in a conversation might be withholding, the words that are used to hide rather than reveal. Bearded and slight of stature, friendly but intense, the young filmmaker confesses that he’s always more interested in what’s not being said.

“People never really tell you what’s on their minds,” he said. “Call it the duality of man — that’s what I’m after.”

Duality is a good theme for Mosley. At 28, he is known as a director whose films are utterly distinctive in the crowded North Texas indie scene. But he’s equally well known as an actor. The two passions — acting and directing — have intertwined in his life since he was in elementary school in Arlington, with one set of skills informing and making possible the other.

Six years out of college, he has acted in major or minor roles in at least 30 indie films, TV shows, and web-only series, though most have garnered little attention outside of film festivals and online indie movie forums. “He’s one of the top [film] actors in North Texas,” said James Johnston, a Fort Worth producer and director who has worked with Mosley on many projects.

Mosley enjoys acting. But he does it in part because the small paychecks from those acting gigs help finance his own eccentric, ambitious movie projects. As a director, he’s completed six short films plus a music video and two features (the second is currently in post-production).

He specializes in intimate, sometimes experimental character studies and chamber dramas that deal in subtle ways with how people communicate with each other (or fail to) in often-extreme situations. The fact that Mosley taught himself most of his acting and directing skills before he ever took a film course makes the quality of his work startling.

He has quietly emerged as a sort of John Cassavetes of North Texas. The indie film godfather — one of Mosley’s big influences — was famous for acting in other people’s projects to help finance his raw, uncompromising vision as a director. Thus far Mosley has funded his movies through a combination of acting, working a day job at a coffee shop, and some help from his parents.

He feels, though, that the time has come for a change of scenery, one that he hopes will widen his professional options and increase his visibility with a new set of independent filmmakers.

“I feel like I’ve been part of a very supportive community here in North Texas, but it’s time for a change of pace,” he said. “Hopefully, you can always come back to your family.”

When Mosley was 9, his parents gave him a digital camera, and he promptly began shooting improvisational scenes and situations with friends and neighbors in his native Arlington. He had an intense interest in the Universal Studios horror films like 1931’s Dracula and Frankenstein, which translated into various childhood attempts at vampire and werewolf movies. At 13 he made a blockbuster called Invaders From Venus that featured 20 actors, 30 locations, and cheap special effects including spaceships with lasers and a supposedly incinerated cow.

By the time high school and college rolled around, he had developed considerably more sophisticated tastes in movies, favoring filmmakers like Cassavetes, Bergman, Antonioni, Altman, and the Austrian director Michael Haneke. He earned a bachelor’s in English literature with a minor in film from the University of Texas at Arlington, learning a lot from film professors like Andy Andersen and Bart Weiss. He said he’s grateful for the unfettered access he had to professional filming and editing equipment at the UTA film labs — and for his fellow students, who proved to be of great value.

Andersen and Weiss “nurtured my ambitions, but I feel like I got at least as much out of working with other students,” Mosley said. “Growing up, I was making movies with friends who didn’t necessarily know a lot about film. At UTA, I was surrounded by people just like me, film students with their own ideas and inspirations.”

Upon graduation in 2006, Mosley continued to make movies. To help support himself and his projects, he started working as a Starbucks barista. For the past few years he’s been living in the Arlington home where he grew up; his parents, who live about 20 minutes away, still own the place and help him out with a little cash now and then. “I’ve been blessed because my parents have been so supportive,” he said. “If it wasn’t for them, I couldn’t continue doing what I’m doing.”