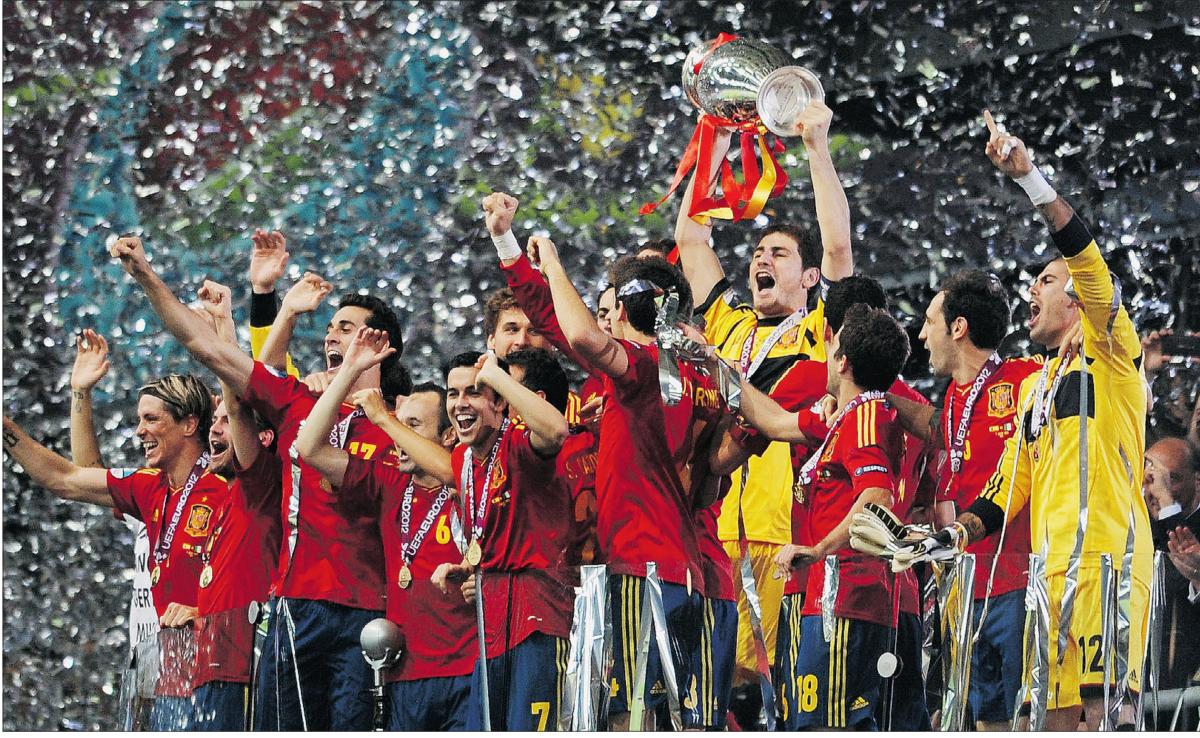 So here are my thoughts as Euro 2012 ends with Spain victorious once more:

Spain are superhuman Everyone is calling this Spain team the greatest national soccer team in history. We won’t get a definitive answer until someone invents a time machine and pits this team against 1970 Brazil and some others, but three straight tournament victories is awfully hard to argue with. (USA’s victory over Spain at Confederations Cup 2009 looks even more impressive now.) Consider that they won this tournament without their all-time leading goal-scorer David Villa, who broke his leg in December, and without defensive mainstay Carles Puyol. Consider that a streak like this can be broken by one bad coaching decision, one refereeing blunder, one badly timed injury, or one collective off day. Then you’ll understand what an achievement this is. Can Spain win World Cup 2014 now? We haven’t had a repeat World Cup champion since 1962, but who would bet against Spain now?

Their 4-6-0 formation was a rousing success… The thing is, Spain deployed the same 11 starters for the final as they did for their opener (also against Italy). That opening was a pretty much toothless display, and I disparaged it. I guess it just took some time for the formation to find its groove. The extra midfielders prevented Italy’s Andrea Pirlo from taking over the game (as he did against England and Germany), and confused Italy’s defense. Without a recognized striker, it was impossible to tell where the attack was coming from. Somewhere, Rinus Michels is smiling. Spain played with an incisiveness and flair that I haven’t seen from them at any point during any of the three tournaments that they won. That’s the most dominant display of soccer I’ve ever seen.

…but don’t expect anyone to imitate it To play with this formation, you need four midfield playmakers of the caliber of Xavi, Xabi Alonso, Andrés Iniesta, and Cesc Fàbregas. Italy has one such player in Pirlo. The six countries eliminated in the semis and quarters have zero such players between them. Coach Vicente del Bosque needed to maximize his team’s strength, and this funky formation proved to be the way to do it. This is not something that anyone can duplicate. Perhaps that 1982 Brazil team would have won the World Cup if they’d thought to play like this. We’re just fortunate to be alive to witness the Spaniards playing this sport as well as it can be played.

Spain’s defense deserves some credit Of course, their offense functions as their first line of defense by rolling the ball around and not letting the other team build much of an attack. However, France had some spells of possession in the second half of their quarterfinal match and were met by two walls of red jerseys. Italy was able to carve out some chances, but Iker Casillas stopped a couple of fierce drives and made a bunch of timely interventions to prevent easy goals. In a battle of the world’s two best goalkeepers, Casillas outplayed Gianluigi Buffon.

Viva la Furia Roja! Everyone’s calling them simply “La Roja” now, but I don’t understand why Spain are so reticent about using this nickname. “Red Fury”? That’s a badass nickname. Better still, it was given to Spain by an Italian journalist after seeing Spain’s soccer team play at the 1920 Summer Olympics.

The Spanish players have cute kids Look at this! And this! Aww!

The 4-0 scoreline was harsh on Italy It was never really a contest after Thiago Motta went down with an injury and the Italians, out of substitutions, had to play the rest of the game with 10 men. Coming back against Spain with all your players is already near-impossible. Doing it a man short? No way. It was bad luck for the Azzurri, but then they already enjoyed a large slice of good luck just to get to the finals. They didn’t look good coming into the tournament, having been smoked by Russia in a warm-up game and having lost to USA in a friendly match last March. (Here’s the match report for USA’s victory from Gazzetta dello Sport, Italy’s leading sports media outlet. You don’t have to know any Italian to understand or enjoy the first sentence of the story.) To steal a page from Bill Simmons, the semi against Germany felt like the end of the sports movie, where the team finally finds vindication in a victory against the odds. You can just imagine the movie fading to black, followed by a title card that read: “Italy lost to Spain in the final, but their fans will never forget their magical run.” Not only are their results encouraging, but Italy now can see a way forward with Balotelli and Giuseppe Rossi (who missed the tournament due to a torn ACL) as their strike force. Thanks to them, Italian soccer has something it hasn’t had in the last six years: a future.

Feel good for Balotelli… He hasn’t always been the most likable guy, but he has endured some racist stuff that would make you blanch. A few years ago, when he was playing for Inter Milan, fans of his own team scrawled graffiti on the walls of the training grounds, saying that he wasn’t a real Italian. I wonder how those idiots felt when Balotelli scored those two goals against Germany. And he celebrated by hugging his mother. How nice.

…and for Italy coach Cesare Prandelli Outsized egos and flamboyant personalities are the norm among high-profile soccer coaches, but this guy is worth rooting for, and not just because he’s quiet and low-key. He has spent his career coaching in the Italian league, but never won a championship. Instead, he has cultivated a reputation as an overachiever with small-market teams. Only once did he ever get the chance to coach a team with a big budget, and he left the job after a few days to take care of his wife, who was diagnosed with cancer. (She later died.) He got the job with Italy’s national team because all the bigger-name coaches were unavailable. This was his first chance to prove himself on the world stage, and he seized it.

Cristiano Ronaldo finally came into his own Even after he showed the ability to destroy teams all by himself at Manchester United and Real Madrid, detractors still called him a show pony because he never duplicated that form for Portugal in a major tournament. This summer, we saw him dismantle Netherlands and Czech Republic all by himself. Spain proved to be a bridge too far, and Ronaldo got stranded in the penalty shootout, but he proved his worth in his national team jersey. The rest of his team is pretty fair, but it’s too bad that Portugal doesn’t have another Ronaldo. Then they could deploy one Ronaldo as a winger to create chances, and the other as a center-forward to finish them. Any team that had two Ronaldos would be hard to stop.

What happened to Germany? “Was ist passiert?,” as they’d say. The Germans were supposed to make the finals and provide a more direct, muscular opponent to Spain’s finesse. The clash of two high-powered offenses was supposed to be a battle for the ages. Well, the Italians got in the way, Bastian Schweinsteiger looked gimpy in central midfield, and the team as a whole failed to show up. (That’s the sort of funk that Spain has managed to avoid in winning these three tournaments.) Disappointment now reigns in Germany. Yes, the team is young and will get more chances, but it was supposed to be ready now.

France sabotaged themselves At least Italy tried to go at the Spaniards. The French had the personnel to do that, too, but instead they bunkered down with an ultra-defensive lineup that backfired on them, and so they were eliminated in the quarterfinals. Coach Laurent Blanc paid for it with his job. Now the French players are backbiting again. Looks like we’re back to the dysfunctional France we saw two years ago. It’s fun to watch if you don’t like the French (which is a lot of people, especially after their World Cup disgrace), but just once I’d like to see what this crop of players can do with their heads on straight.

Antonin Panenka lives! The Czech midfielder gave his name to a penalty shot at Euro 1976 when he took the last penalty in the final against West Germany and sent goalkeeper Sepp Maier the wrong way before softly chipping the ball down the middle of the goal. Thus was born the “Panenka,” a term that came up repeatedly at this tournament after Andrea Pirlo psyched out England by doing one in Italy’s shootout victory, followed by Sérgio Ramos doing the same to Portugal in the semis. Neither of those shots were as significant as Panenka’s (the match-winner against one of the world’s greatest goalkeepers), nor were either of them as beautiful as the one Zinédine Zidane scored in the World Cup 2006 final. Yet they were intimidating, the sign of guys who kept their cool under pressure. Two things are certain: Kids will be practicing this on training grounds everywhere, and eventually someone will try it and fail and look really stupid, like these guys. Well, nothing ventured, nothing gained. A nice sentiment for me to wrap up this tournament with. 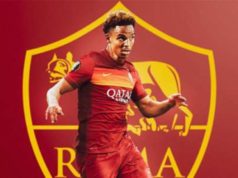 Notes From a Quiet Transfer Window