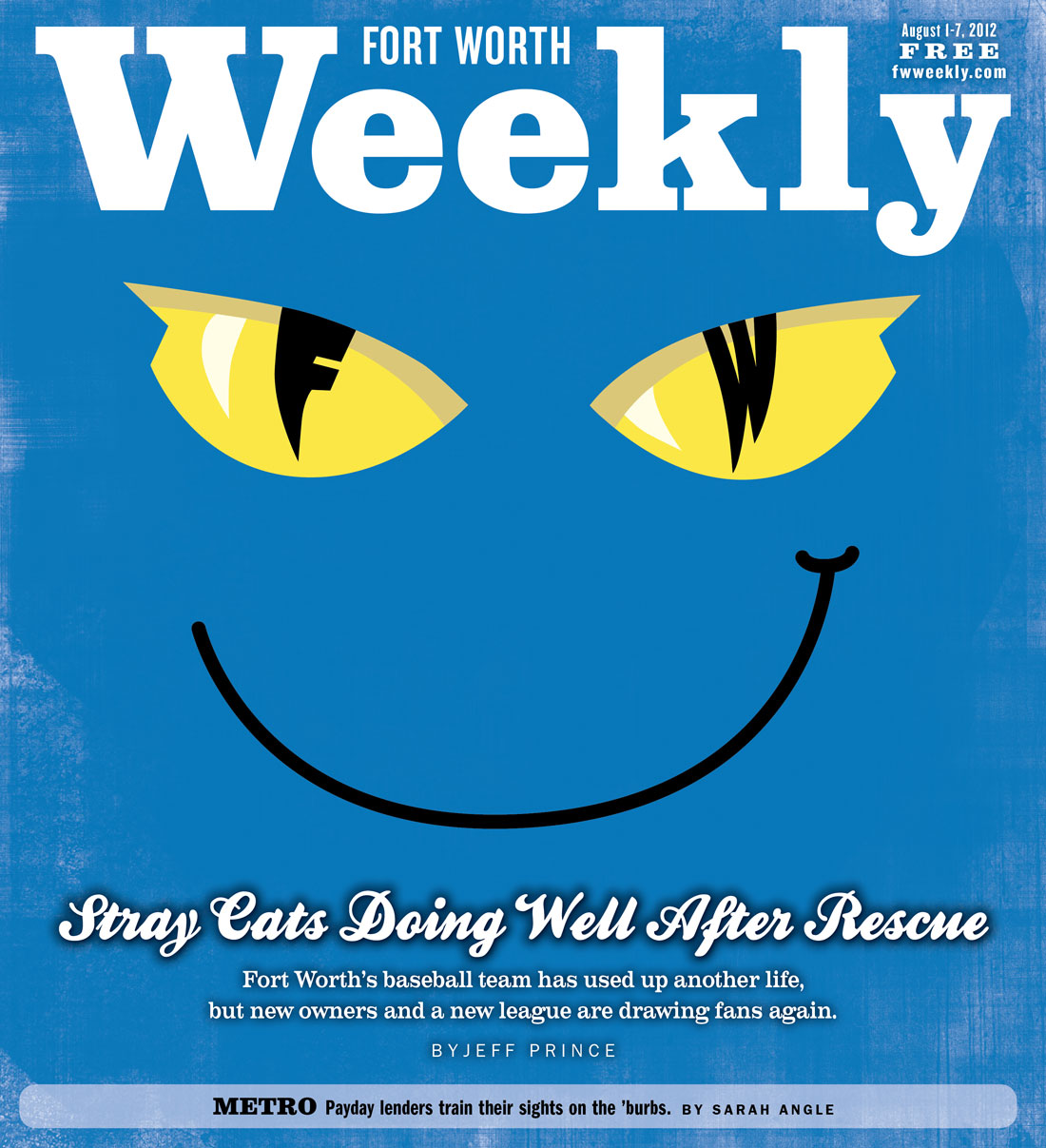 The clock — that damned clock atop the LaGrave Field scoreboard — is the unwitting symbol for every disappointment the Fort Worth Cats have suffered in recent years. Sunlight bleached its face a chalky white. The numbers faded. The hands are missing. But there it is, prominently displayed in centerfield, serving as a base for the American flag that flaps in the wind moving north across the Trinity River.

The clock is one of the first things Virginia Treadway mentions when she explains why she recently relinquished her Cats season tickets. The clock isn’t really important, working or not. But it’s an easy illustration of the overall neglect that pushed supporters like Treadway out the door. Little things, like paper towels missing in the bathrooms, start to add up.

“The clock didn’t work, the [overhead] fans weren’t working, the water fountains weren’t working,” she said. “Things we really needed were not getting taken care of. For the last few seasons there just weren’t enough staff to do the job that needed to be done.”

Few fans rooted for the Cats as much as Treadway and family. They bought season tickets every year after Carl Bell bought the historic but long inactive team in 2001 and re-established LaGrave Field. Treadway was a member of the team’s booster club. Her son, Matt, was batboy for seven years.

All these years later, Treadway sounds as if she’s recovering from a romance gone wrong.

“I fell madly in love with LaGrave Field,” she said. “I was there on groundbreaking day. I saw it grow from nothing to this wonderful ball field. We made wonderful memories.”

Other fans stuck by the team. New fans came along. People are having fun.

It’s what the Cats are supposed to be about. Instead, news media in recent years have focused almost exclusively on the team’s financial woes, the threatened foreclosure at LaGrave Field, an overextended owner who found himself upside down during a recession. The drama created a sense of foreboding that seeped into the stands.

Change has come this season. The most obvious examples are the men on the field: The entire roster is different. This team isn’t as good as some from previous years — the new Cats are playing together for the first time, and it shows sometimes. But their enthusiasm, combined with new management and a revitalized staff, is creating a refreshing vibe.

“The team is already profitable,” said Dallas attorney and former U.S. Rep. John Bryant, part of the ownership group that purchased the Cats in December. “The crowds have gotten larger. You have to manage the evening well so that everybody has a good time when they’re out here, because your best advertisements are the satisfied customers who want to come back and tell their friends about it.”

Children clinging to baseballs, programs, and felt-tip pens leaned against the infield fence and grew wide-eyed and fidgety whenever baseball players stopped to chat and sign autographs. Big-shot major leaguers Josh Hamilton and Yu Darvish weren’t around. They play 17 miles to the east. Fort Worth Cats players are obscure by comparison, but they’re still heroes to local kids.

The Cats were down by one run on a recent evening when a rainstorm doused the field in the third inning, sending fans rushing to the parking lot. The grounds crew pulled a huge tarp across the infield, and puddles quickly formed. The umpire postponed the game after lightning erupted overhead. The stadium was mostly empty when the Cats players suddenly bounded back onto the field in bare feet and T-shirts. They hurled themselves across the tarp like it was the world’s largest Slip ’n Slide, reminiscent of the mud-splattered scene in what is widely considered the best movie about minor-league baseball, Bull Durham.

“Look,” second baseman John Dziomba yelled, falling to the ground and flopping in a puddle with his arms by his side. His drenched teammates laughed at Dziomba’s dramatic reinterpretation of a fish out of water.

The groundskeeper didn’t look happy about the horseplay (or the potential for wear and tear on the expensive tarp). But he stayed quiet and let players blow off steam. They might stoically sign autographs for excited kids before games, but many of these players are just overgrown kids themselves.

Baseball is about leisurely pleasure, and the Cats (formerly known as the Panthers) began supplying it in 1888. Fort Worth loved its minor-league baseball team, and LaGrave Field was built in 1926 to replace old Panther Park on the west side of North Main Street and to accommodate the growing number of fans. Major leaguers sometimes trained or played exhibition games there, and over the years LaGrave Field saw the likes of Hank Aaron, Joe DiMaggio, Jackie Robinson, Babe Ruth and many other eventual Hall of Famers. By the 1960s, however, the stadium was in disrepair and the Cats had ceased playing.

Bell rebuilt the stadium and put a new Cats team on the field just as the 2000s were beginning. The Rangers were still struggling in Arlington and expensive to watch. Local fans took to the Cats. Opening day drew a packed house, and Virginia Treadway sat in the lower section behind home plate — a seat she would fill for the next 10 years.

Opening-day memories come flooding back to her with little prodding. Fireworks. Good weather. Exciting game. The downtown skyline providing a postcard-ready backdrop. Treadway recalls leaving the stadium that night and seeing Bell standing near the front gate, beaming with pride.

“I turned to him and said, ‘This was a magical night.’ He said, ‘It’s only going to get better.’ And it did for a long time,” she said.

Seven years to be exact. A recession in 2008 sent Bell hurtling toward the metaphorical disabled list. Not only had he bought the Cats and LaGrave Field, he’d purchased surrounding acreage that was expected to become prime real estate once the billion-dollar Trinity River Vision project got under way north of downtown. The project included plans to enhance the river near LaGrave and establish condos, shops, and restaurants. Bell stood to capitalize on his investment if he could weather the country’s economic doldrums.

“It wasn’t just the stadium; he had bought 50 acres here and had a huge $30 million loan,” Bryant said.

The recession deepened, Bell’s purse strings tightened, and hard times began to show at the stadium. Nobody doubted Bell’s deep love for the team and the stadium. He was always popular with fans for returning minor-league baseball and cheap entertainment to Cowtown.

“Carl is a good guy, and he did a great thing for this community,” Rep. Bryant said. “He has a great affection for the team, the field, and the tradition. He came here as a child. He brought that great tradition back.”

Being popular and passionate doesn’t pay the bills. Staff was cut. Team president John Dittrich left in 2009, and general manager Dick Smith filled the leadership role. He proved himself a bottom-line kind of guy who didn’t endear himself to fans.