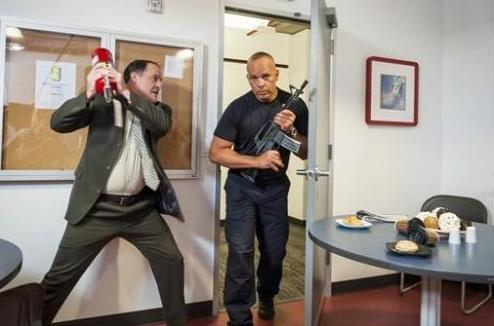 Could there be a better sign of how accustomed to mass shootings we have become? We no longer view these atrocities as surprising.  We actually expect them.

What else can be concluded from a six-minute public service video, produced by the City of Houston with a $200,000 federal grant from the U.S. Department of Homeland Security, that suggests methods for surviving a mass shooting.

The city released the video Friday, a few weeks after a mass shooting at a movie theater in Aurora, Colo. that left 12 dead and two days before another killing spree at a Sikh temple in a small Wisconsin town.

The video does its job. It’s scary, engaging and memorable. Has there ever been a publicly funded video of an armed wacko blowing away innocent people with a shotgun? It cost a pricey $200,000, maybe they got Quentin Tarantino to ghost-write this thing.

“Run. Hide. Fight,” the ominous narrator tells us, the catch-phrase meant to become the  “stop, drop and roll” for those trying to escape death at the hands of armed-to-the-teeth crazies. You know, the ones that shoot up public places with increasing frequency these days.

My favorite part? Convince anyone around to get the heck out of there rather than hide, but “don’t let them slow you down with indecision.” Yeah, seriously! I mean, that guy’s got a friggin” shotgun! Move it or lose it, honey!

Such is the current climate in America, the home of more burgers, baseball games and mass shootings than any other country, and perhaps the only one that would substitute a substantive discussion about gun control with a video suggesting people fight back against a killer with a pump shotgun.

Predictably, gun rights activists lamented after the Aurora shooting that no one in the movie theater had a gun to shoot back through the dark, gas-clouded movie theater full of people. And despite the video’s suggestion to fight back, they still complained because it didn’t give more information about what kinds of weapons, i.e. guns, to use.

From the Associated Press:

The video’s lack of information about using a weapon in self-defense was a “glaring shortcoming,” said Danny Davis, director of a homeland security graduate program at Texas A&M University. He noted Texas’ concealed weapons law. Davis suggested that the Colorado shooting, which killed 12 people, may have ended differently had someone in the theater been armed and fired back.

At this point, both political parties have become generally terrified of discussing gun control. To suggest that it might be possible to prevent mentally unstable psychos from getting a hold of assault rifles in the first place is now more controversial than the repeated mass murders they carry out with those weapons.

No, the only option left to us by a cowardly, gridlocked Congress is what’s recommended by the National Rifle Association: Get armed and stay that way, whether you’re going to a movie, school or church.

Oh, and a video making sure you remember to run away. Check it out: