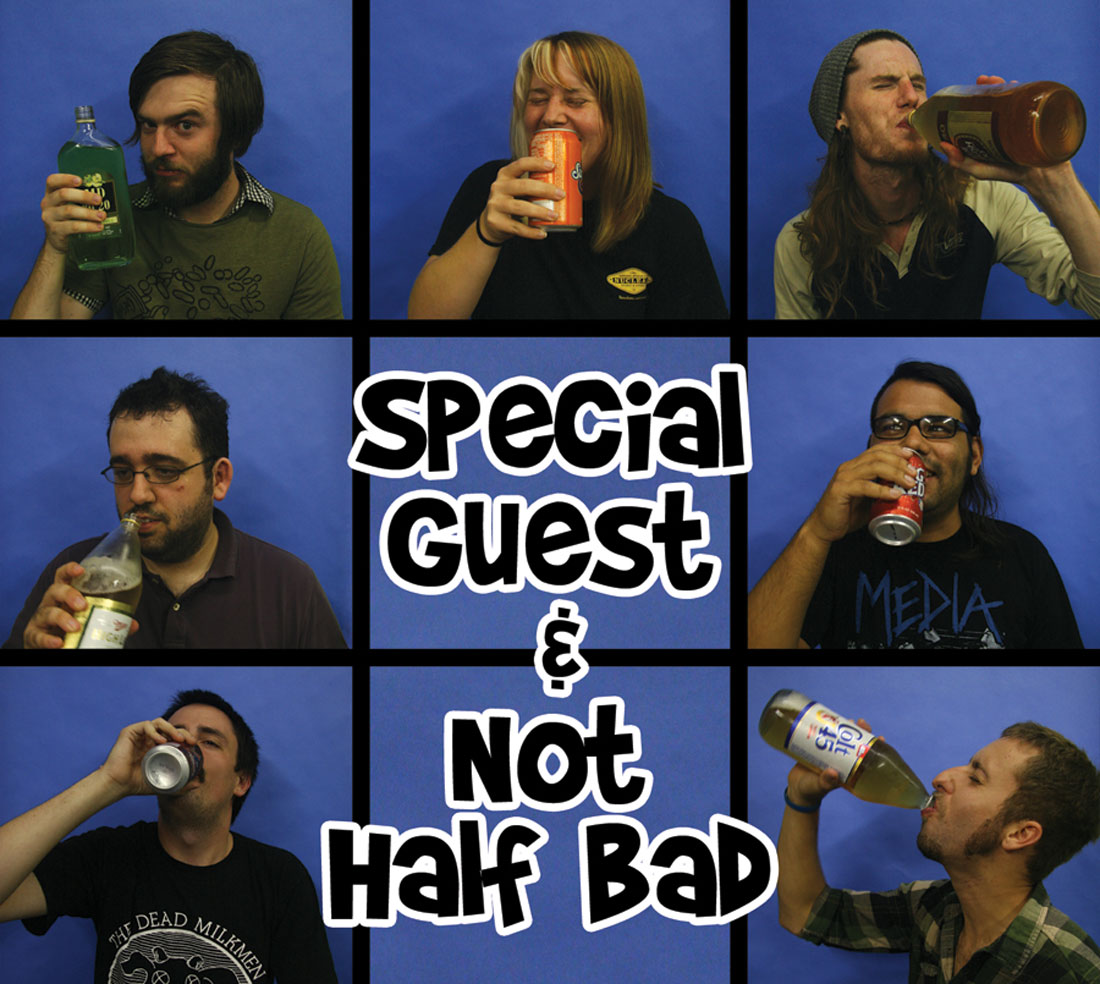 Perhaps one of the most tired arguments that can arise between two humans is the one that tries to define punk rock. People who obsess about this stuff often cite a sorta-famous quote by the Minutemen’s D. Boon, who affirmed his own band’s funk-copping sound as punk, because “punk was whatever we made it to be,” an idea that at one time seemed to define the genre by not hemming its members with definition. Of course, the Minutemen are no more, and even though its remaining members (or at least bassist Mike Watt) have adhered to that open-ended ethos in subsequent projects, punk –– for a lot of people –– means four overdriven chords over double-time beats, a decidedly lockstep template for a movement that rails against the tyranny of authority. Ironic then that the template is used to arbitrate what is and isn’t punk.

On their recent split-CD, Fort Worth punk bands Special Guest and Not Half Bad arbitrate a punk rock code as though they’re judges, jury, and hangmen, angrily chugging along the same cracked sidewalk that’s been riffed over by punks for the past 20 years.

But who cares, right? Punk rock (proudly) isn’t out to make Dark Side of the Moon, despite whatever Billie Joe Armstrong’s latest Broadway musical might have you believe. If there really is anything about punk that is definitive, it is the music’s immediacy and fervor. Even at his laziest, NOFX’s Fat Mike still gives two shits about getting shitfaced — and fast. Special Guest and Not Half Band might be exactly what you’d expect, but they deal the immediacy and fervor the way Schwarzenegger deals bullets and bon mots.

Special Guest leads the split with the first eight songs, none of which tops two minutes. The opening track, “Wiccans/I Forget,” is 100 seconds of regret for having the memory of a goldfish, introduced by a deceptively doomy interval that switches to a four-on-the-floor three-chord pop-punk banger. The way singer/guitarist (and 1919 Hemphill volunteer) Al Rios spits the lyrics, you get the idea he’s pretty bummed about forgetting what he just read. It’s the voice you used in high school to scream at your parents.

Rios’ juvenile yelling isn’t at all a problem –– he obviously means what he’s saying –– but the lyrics carry a level of specificity that is sometimes hard to relate to. “Homosexual Party Boat” works because he laments his nonrelationship with an estranged sister, and that’s something everyone can get behind. But on a song like “Make it Evil,” in which he’s railing against some flake who talks the punk rock talk but is too lazy for the walk, it’s hard to care, if you’ve never been ensconced in his scene.

Perhaps the anger is aimed to people who sign up for volunteer work but never show, especially given that both bands effusively thank 1919, Fort Worth’s famously progressive, all-ages, ardently sober punk rock venue, in the CD insert. (It’s an orange, handmade photocopy of the lyrics that’ll give you warm, fuzzy nostalgic feelings for the pre-internet days of mail-order.) If that doesn’t interest you, then neither will “Pop Punk for the Punks” or “Here Come Two,” both of which are tacit indictments of poseurs, perhaps the only villains in the punk rock worldview worse than The Man. Less reductively, the first tune fumes about Green Day’s late-period polish, while the latter calls out the conformity of lookalike nonconformity. It is bullshit that every kid who believes in his or her Anti-Flag t-shirt looks and sounds the same and possibly may not think for him- or herself, but the tone of the record suggests that differing opinions aren’t tolerated if they don’t fit the program.

Still, the music is pretty good. Special Guest might not be earth-shattering in any way, but its tuneage is rough and raw enough to appeal to anyone who’s ever been moved by The Adolescents or Descendents. The recordings are amateurish but good, and the bass lines add melodic textures, cutting across walls of guitar-bashing like Jay Adams in an empty pool. And even if you don’t care about whatever drama lurks behind the 1919 scene, Rios’ ire is tempered with a sense of mature resignation. On the aforementioned “Pop Punk,” he remarks “you know you’re getting old when your records are better than your shows.” Getting old is a sentiment that’s universal, just like the live-for-today spirit of “So This Is It, We’re Going to Die.” Even if these songs sound like someone yelling at his dad, they’re portentous arguments that every dad knows deep down inside.

Not Half Bad fills the remaining third of the split. Like its brethren on Side A (as if there were sides), Not Half Bad cranks out distorted screeds over breakneck backbeats, but where Special Guest’s anger sounds a little more grown-up, NHB spews a sort of generalized venom that’s difficult to swallow. Sonically, the members of NHB are polished performers, slightly more so than Special Guest, but still loose enough not to mar your ears with overproduction. But as soon as you hear bassist Alex Weymier yell, “Fuck you, we know this is our time!” you can pretty much guess what his band is about: The world is about to be remade in the image of punk rock losers. “Our Time,” with its admittedly hooky chorus, takes aim at the 1 percent, but these kinds of ideas never seem to provide a solution after the inmates have taken over the proverbial prison.

On the other hand, “Chace’s Song” is a little more contemplative, questioning the old-age adage that “it’s all downhill from here,” fulminating against the idea that you have to be a certain way once you’ve reached a certain birthday. In the second half of the tune, NHB wishes with heartfelt sincerity that someone “had the guts to say / All those little things / You knew would help me / Like how all my friends would move away / And get jobs they fucking hate / Just to put food on their plates.” But guitarist Chace Rowe faults them for refusing to change. To what, broke and hungry? Sounds miserable either way, though slightly less so when the misery at least keeps the lights on.

Not Half Bad might not be as empathetic as they think they are but in terms of tightly ripping through anthemic choruses and arrangements that break up genre-sameness, they could easily call themselves Actually Pretty Good. Weymier’s bass carves inventive lines like a clever graffito on a Wall of Sound, and the triple-vocal shout-alongs (plus the group vox on the acoustic “We’re Going to Hell”) make Not Half Bad’s part of the split a worthwhile listen. Even if you can’t get behind these bands’ personal politics, the disc is a fitting document of what’s happening now, in a micro-scene that the average person might never even notice.