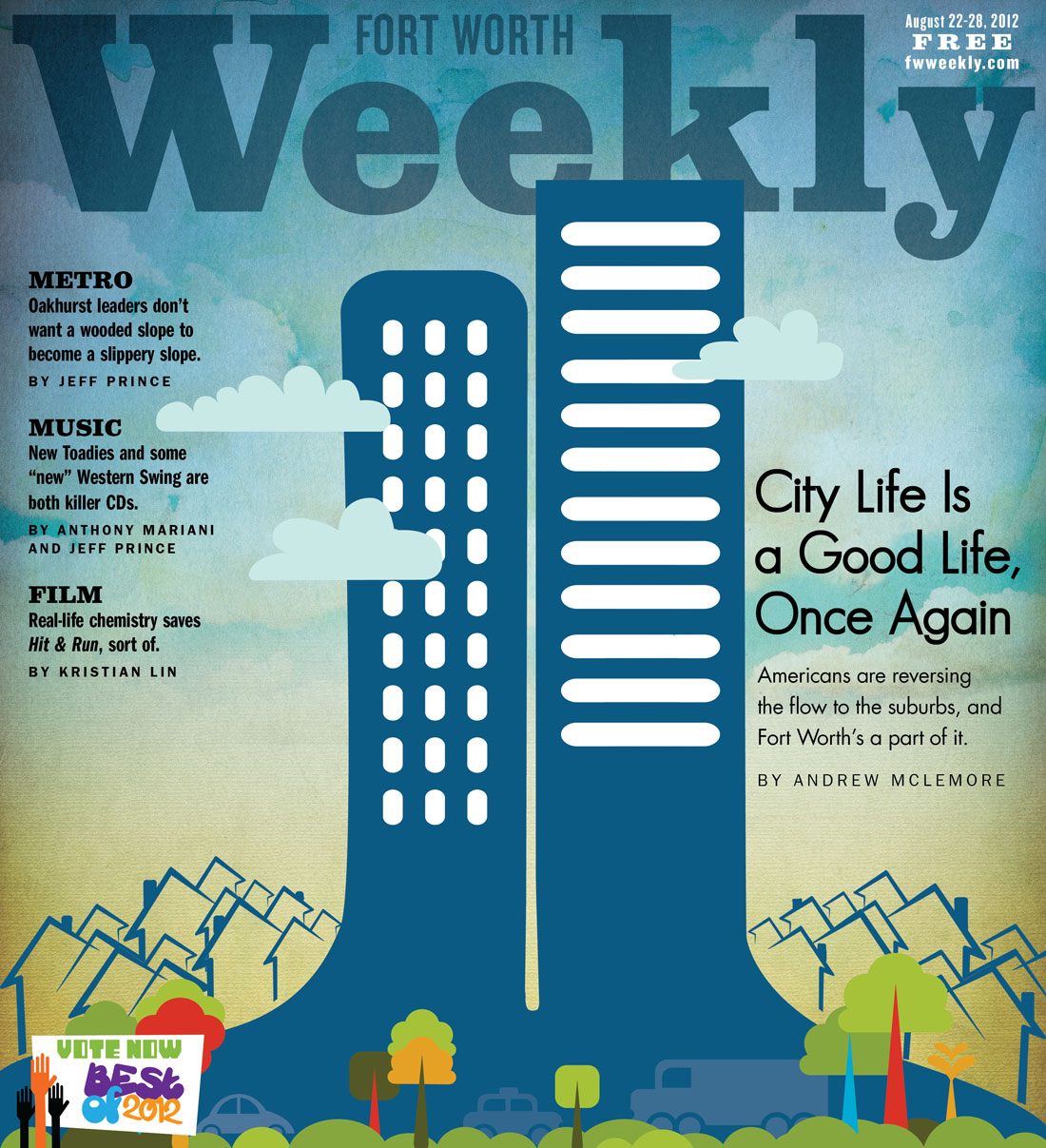 Night Riders regulars are easy to spot. They’re the ones who get to the Chat Room by 7 p.m., early enough to drink a beer or two before the group of mostly locals pedals their way down Magnolia Avenue toward the next watering hole.

Sporting a Polo shirt and shorts, 27-year-old Durango Ruiz waves to his fellow cyclists, parks his ride, hops inside the bar for a Fireman’s 4, and returns to the patio to discuss his new Kevlar tires.

Ruiz moved to the Near Southside a few months ago and rented a cheap room in an old house. After growing up in Keller, he spent two years in Los Angeles working on a master’s degree in music from the University of Southern California, then moved back home. He didn’t stay long.

Ruiz, a hardcore cyclist and trumpet player, wanted bandmates, places to perform, trails to ride. He wanted short commutes and long nights. He wanted community, and Keller didn’t have it. But cruising down Fort Worth bike lanes surrounded by 50 other people — old, young, and, if you’re lucky, “hot” — he may have found what he was looking for.

“As far as young single people, concentrated urban developments are where it’s at,” Ruiz said. “I wanted to be closer to the action.”

After decades of massive post-war migration to the suburbs, there are significant numbers of Americans, especially those 35 or younger, who think “the action” is in the long-neglected core neighborhoods of big cities.

Between April 2010 and April 2011, more Americans moved to cities than to suburbs for the first time in a century. Though it’s still early to say whether the trend will last, Central Fort Worth has begun to see new and younger residents with the rejuvenation of the Near Southside, West 7th, and even downtown.

And it is twenty- and thirtysomethings, along with retirees and childless middle-aged couples, who are filling apartments and condos in these nascent meccas for bike riding, restaurant sampling, and bar hopping.

Census data shows it’s happening around the country, but especially in Texas. Fort Worth ranked 12th among cities that added the most residents last year. Of the 17,500 people who moved here during those 12 months, at least 800 of them found new digs inside Loop 820.

“It’s a big deal. It’s clearly a changing trend,” said Randle Harwood, the city’s planning and zoning director. “It’s an indicator of a pretty good trend for the future.”

Urban planners predict that this is just the beginning. In the Near Southside alone, developers are scheduled to break ground on three new apartment complexes within the next six to eight months. That’s another 1,000 units that will house at least 2,000 more people in one of the hippest, fastest-growing neighborhoods in Cowtown, which isn’t the only city experiencing urban renewal.

Texas’ economy recovered from the recession more quickly than many other states. As a result, the land of highways and gas drilling is slowly transforming to fit the needs of this new, younger group of people. They want a lifestyle that in most of the state’s major cities simply didn’t exist before. Either no one was interested in it, or there wasn’t enough money in it to interest developers and city planners.

“We’re at the economic center of the world in Texas,” said Steve Eisner, who’s backing a new apartment complex in the Southside. “That’s a lot of what’s driving this development: young people and young families looking for jobs.”

The state still has plenty of catching up to do. The jobs may be here, but other cities like Philadelphia, Portland, and Washington, D.C., are years ahead in building the kind of walkable, bikeable environments that appeal to many young professionals.

Older folks will come too, but only if the city keeps the torch burning by convincing young people to stay. That will require a robust public transportation system, a continuing focus on walkable areas, and many miles of bike lanes. In the last two categories, Fort Worth, unlike Dallas, has made big strides.

There is much still to be done, however, and the stakes are high.

Urban sprawl in the Metroplex seems like an unstoppable force. There has been little to impede the outward growth that is such a double-edged sword for cities: A larger population can be good for the economy, but endless sprawl is not sustainable, resulting in slower emergency response times and rising costs of services.

Young people are leading the charge, placing city life once again at the center of American society. They are rejecting the suburbs of their childhood in favor of the dense and diverse metropolises that once fostered the creative, vibrant lifestyles of prior generations.

As the Night Riders pedal hard out of the darkness of the 4th Street underpass and emerge on the west side of I-35, downtown Fort Worth appears first like a distant picture of a city, and then, with a few more swift pushes, expands into a panorama of light and metal, a living canvas you can enter and exit like Mary Poppins.

It’s the kind of moment that explains the appeal of the Night Riders and the idea of exploring the heart of a city, street by street.

Each time Katie Schech entered a tunnel, she rang her bell with the rest of the group, laughing at the echo bouncing off the concrete walls. The 28-year-old didn’t even own a bike when she moved to the Near Southside about a year ago.

She didn’t take long finding one.

“I feel like I was limited, growing up in the suburbs,” she said. Then she found a place in Fairmount. “I looked around and saw, wow, this is cool. If you’re in the suburbs, what are you going to do with a bike?”

Schech, who grew up in Crowley, said she wouldn’t ever consider moving back. She feels like she’s part of a community in Fairmount. The Night Riders can bring in more than 70 people on their Sunday rides and about half that on Wednesdays.

“I have a friend who lives down where I went to high school and is desperately trying to get to where I am,” she said. “I will probably stay in Fort Worth for a while.”

Generations that grew up in the suburbs are looking for an exit as adults. Many are like Schech, moving to the city because of jobs only to find themselves embracing a lifestyle they didn’t even know they wanted.

That’s partly because — outside of Austin — that lifestyle hasn’t existed in most Texas cities until the last five to 10 years. Even some suburbs have started to create more pedestrian-friendly environments, but that infrastructure already exists in cities.

Though many inner-city areas still need sprucing up, most American cities are no longer the polluted, dirty, and crime-ridden industrial centers that caused the massive urban exodus of the early to mid-20th century.

“We’re talking about a generation that grew up disconnected from the city,” Harwood said. “There’s a different philosophy among young people; there’s no need to own land for validation.”

When Paul Paine, president of Fort Worth South Inc., asks people what they like about the Near Southside, he inevitably hears the same thing: “It’s got an Austin feel.”

Old-timers may bristle at the suggestion that Texas’ bastion of hippie-dippy liberals has much in common with Cowtown’s conservative self-image as the home of “cowboys and culture,” as the Fort Worth Chamber of Commerce puts it.

But the Austin comparison might not be so far off.