Two years ago, the chamber paid a couple of TCU marketing professors to conduct a survey of young professionals about their perceptions of Fort Worth. They presented the results last month.

Most of the 900 young people surveyed described it as “authentic,” a “large city with small-town feel” and a “laid-back culture.”

The Austin comment likely has less to do with direct similarities with Fort Worth and more with a sense of community and shared culture that isn’t often associated with other major Texas cities.

As Mayor Betsy Price puts it, Fort Worth has its own vibe.

“If you want the nightlife hip-hop clubs, maybe you want Dallas,” she said. “But we’ve got some great nightlife too; it’s just a little different flavor.”

Of course, the attraction to Fort Worth for young people isn’t just about the culture and entertainment. The jobs help quite a bit too.

For years, Texas has led the country in job growth, with the Fort Worth-Arlington area ranked fourth this year behind Austin, Houston, and Salt Lake City.

Gas prices have climbed high and stayed there, while increased traffic is forcing people to spend more time in their cars. Add a housing bust that led to widespread foreclosures in suburban areas, and the list of reasons for young people to stay there gets pretty short.

As a result, young people will continue to move to the cities for the foreseeable future, said Ray Perryman of the Perryman Group, which analyzes economic data around Texas.

“The popularity of the urban lifestyle, particularly among young professionals, appears to be growing,” he said in an e-mail. “The underlying factors are fairly entrenched.”

There are many practical considerations that lead young people to move to cities, but the common factor is a desire for an “edgier” lifestyle, for “things that are stimulating,” Potter said.

“The issue is, they are not looking to settle. The jobs they are looking for are really just to enable their lifestyle,” he said. “If an urban area is able to establish that it’s a lifestyle — and there are employment opportunities — you’ll have people wanting to move there.”

The only real downside to increasing the movement back to cities, said Sean Crotty, a professor at Texas Christian University, is the possibility of regentrification, or displacing lower-income people in older neighborhoods that suddenly become trendy.

That’s why it’s important to keep the area affordable for both lower- and middle-income residents, partly by renovating old buildings for housing. The Near Southside has done this — two of the three proposed apartment complexes are renovations.

And it’s not just good governance; it’s part of the area’s charm.

“I knew I wanted to live in Fairmount. It’s pretty. I like the sense of community and neighborhood. I can sit on the porch and feel comfortable,” she said. “There’s so much going on right now. … I feel like it’s kind of a new era for Fort Worth.”

Thirsty for rain, the grass crunches a bit under Eisner’s brown leather boots.

The long-time developer walks comfortably, hands in blue jeans, through a scruffy plot of land at College Avenue and West Peter Smith Street, where he will break ground this month on a four-story, 170-unit apartment complex.

Standing near a dead tree covered in the radiant orange blooms of a trumpet vine, Eisner looks north to the skyscrapers towering beyond the warehouses of Vickery Boulevard.

When the complex is finished, residents will gaze out from the top floors on a nighttime vista stretching from the glossy downtown Tower to the crimson neon of Montgomery Plaza to the west. Looking south, they may see some of the twinkling tree lights illuminating the sidewalks on Magnolia Avenue.

It will be called the Phoenix Apartments, after the mythical bird that is reborn from its own ashes. For anyone who’s paid attention to the rebirth of the Near Southside in the last few years, it’s an apt metaphor.

“I’ve been here a long time. I’d seen what was happening on Magnolia,” Eisner says. “We’re not part of that corridor yet. But we will be.”

Eisner is hardly the first. The renaissance of the Near Southside began more than 10 years ago, driven largely by other local developers and urban planners who saw what the area could become — and had to convince bank managers that financing the projects would pay off.

The city also deserves some credit for embracing the concept of “urban villages,” an approach to zoning that creates incentives for walkable, bikeable areas. According to Harwood, Magnolia Avenue and West 7th are success stories because of that idea, and many of the city’s other “urban villages,” like Race Street and the Ridglea Theater area, may still blossom.

The interest shown by Eisner and other developers new to the area is evidence of the Southside’s momentum. In fact, this is Eisner’s first residential project in Fort Worth. He has spent most of his career in commercial development around the country.

The Phoenix Apartments are only the first of several due to start construction in the Near Southside in coming months. The Quarles Lumber building near 8th and Allen avenues is being converted to 260 units, breaking ground at the end of the year. Coca-Cola’s old bottling plant at South Main Street and Pennsylvania Avenue will also be restored and reused as a huge housing center, with 520 units to be built in two phases. The first phase of 200 loft apartments is slated to begin early next year.

The renters are expected to be predominantly highly educated, highly employable, and under 35, though developers are hoping for empty-nesters and retirees as well.

As Eisner wandered down Magnolia during the ArtsGoggle festival two months ago, the evidence was all around him.

“I saw more mid- to late-20s couples pushing strollers than anybody else,” he said. “They’re young, they are obviously familiar with the neighborhood. They either live here or they spend a lot of time here. … There are always going to be people who want to live in outlying areas, but the trend of people moving to the inner cities will continue.”

The Near Southside employs at least 30,000 people, and many of them would like to live nearby, according to a survey by Fort Worth South Inc., the nonprofit redevelopment group that has helped transform what was a historic but decaying area into one of the city’s most vibrant neighborhoods.

Most of the jobs come from the hospital district, and 4,500 of those employed here said they’d like to live in the Near Southside. So far, there hasn’t been enough housing to meet the demand.

Even with the three new complexes coming in, more is needed. Assuming only half of those 4,500 people would actually move to the Near Southside, the area still needs at least another 1,000 units.

“In the next five years, many corridors in the Southside will have a new look,” Paine said. “It’s going to be a crescendo.”

The growth isn’t limited to the Near Southside, either. The West 7th corridor and downtown haven’t added residential properties at the same pace, but the business and population growth is still there and trending younger. 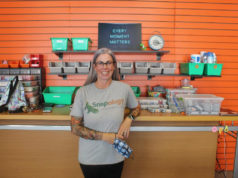