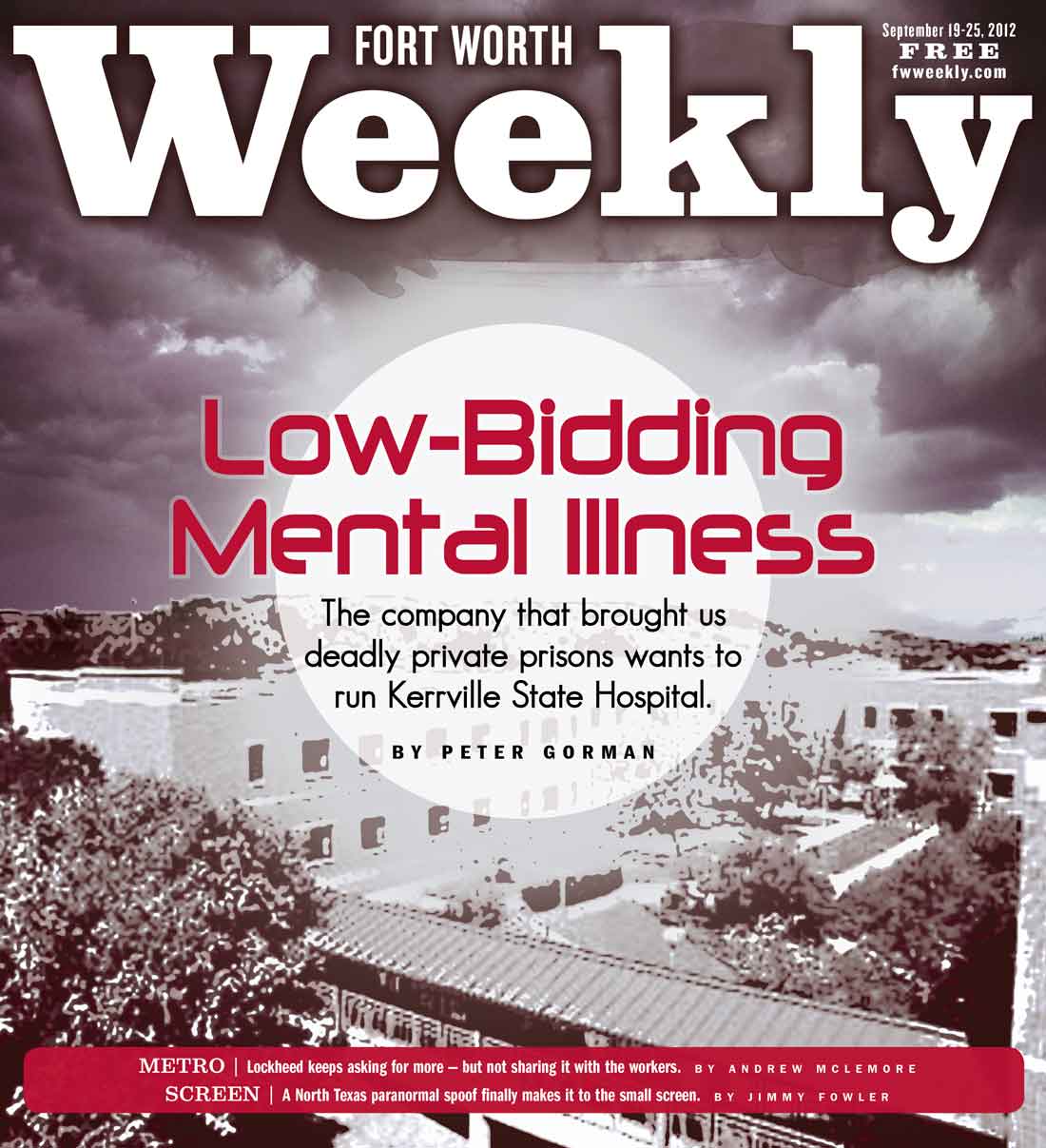 State-run mental health facilities in Texas never have an easy ride: Funding is always tight, and many of them have had problems through the years. But the state hospital in Kerrville, according to advocates and regulators, has been doing pretty well — especially considering that it cares for people who’ve been committed by the courts in connection with serious and sometimes violent crimes.

So why are state officials considering turning over the hospital to a private company that has been found liable for deaths by negligence at similar facilities in Florida and fined for poor patient care in Texas? A firm whose parent company has such a bad record in running prisons and youth facilities that a federal judge called one of those facilities “a cesspool of unconstitutional and inhuman acts”?

That’s what a coalition of mental health advocacy, civil rights, and criminal justice reform groups would like to know. They’re opposing the bid by GEO Care, a spinoff of the private prison operator GEO Group, to take over operation of the Kerrville facility as part of a public-private partnership. The company is the only bidder for what would be a $24 million contract –– and is promising to run the hospital for less than the basement-level funding the state now provides.

The short answer to “why” is that state officials sought bids for a private takeover because the Texas Legislature told them to — with the requirement that bidders agree to reduce costs by 10 percent from what the state now spends. And Texas already spends less per citizen on mental health care than any other state.

It’s part of a broad push in Texas state government in recent years to farm out state-run operations to private companies and, in some case, to sell off state facilities to those firms. In this case the state is simply looking for a way to save a few million dollars through privatization.

GEO Care and GEO Group leaders say they can run the Kerrville facility better and at less expense than the state has run it and can make a profit doing so, while meeting the “highest standards and best practices in the industry.” They downplay the companies’ track record of lawsuits, fines, and deaths of people in their care.

Critics of the GEO companies are livid at the proposal.

“GEO has a track record of heinous things,” said Dr. Ana Correa, executive director of the Texas Criminal Justice Coalition, which advocates for a more effective and fair system of criminal justice. “I’m mortified at the idea that GEO would be in charge of a state hospital.”

The history of GEO Group, formerly a division of the security giant Wackenhut, is riddled with stories of poor inmate care at several of the dozens of jail and prison facilities it runs across the United States and in other countries.

In West Texas, deplorable conditions at a GEO-run detention center in Reeves County led to a major riot a few years ago. In the late 1990s, when Coke County Juvenile Detention Center held young women, Wackenhut was found to have hired a convicted sex offender as a guard. He sexually assaulted a 15-year old detainee. In 2006 and 2007, a male sex offender hired as a guard at the same facility — which by then held juvenile males — was found to have sexually assaulted several inmates.

In 2007, Idaho ordered removal of all its inmates from the GEO-run Dickens County Correctional Facility in Spur, Texas, after an Idaho state inspector saw the facility and called it the worst he’d ever seen. The following year Idaho pulled all 305 of its prisoners from the GEO-run Bill Clayton Prison in Littlefield, Texas, after an inspector found that chronic understaffing had put Idaho’s prisoners at risk. GEO still runs 13 state prisons and federal immigration facilities in Texas, many of which have had serious problems.

More recently, a Justice Department investigation into the company’s Walnut Grove Youth Detention Facility in Mississippi concluded that GEO officials ignored sexual misconduct by staff with inmates and ignored  the inmates’ medical needs and their suicidal and self-injuring tendencies. The investigators also found that the GEO staff used excessive force on the young people in their care.

In April, a federal judge concluded that the staff at Walnut Grove had “allowed a cesspool of unconstitutional and inhuman acts and conditions to germinate, the sum of which places offenders” –– some of whom were as young as 13 — “at substantial risk.”

The GEO Group did not attempt to renew either its contract with the Walnut Grove facility or its contracts with two other jails in Mississippi. The GEO Group also claimed that the incidents in the Justice Department report occurred before GEO took over the facility — despite the judge’s ruling against the company in a lawsuit brought by the father of one inmate, with help from the American Civil Liberties Union.

In 2000 the prison company spun off GEO Care as a wholly owned subsidiary to run state psychiatric hospitals in Florida and South Carolina and the Montgomery County Mental Health Treatment Center in East Texas. GEO Care also operates other facilities in Texas, including minimum-security jails, re-entry centers for people about to be released from prison, and residential treatment centers for troubled youth. The subsidiary’s record has been almost as problematic as that of its parent company.

In June 2011 a schizophrenic patient with a history of suicide attempts was left with just one security officer rather than the two trained staffers who were supposed to accompany him at all times outside the facility. He broke away and leaped to his death from a parking garage. That same month, a heavily medicated patient was found dead in a bath of scalding water. Two months later, a third patient was found with her head slammed through a wall and died of those injuries.

In their report, investigators with the Florida Department of Children and Families detailed the overmedication of patients and described staffers who weren’t sure of their duty to report deaths and weren’t worried about their patients’ mental health.

After that, Florida officials renegotiated GEO Care’s contract to require that a state investigator be on site at the hospital at all times. Since then GEO Care has corrected many of the problems at the facility.

GEO spokesman Pablo Paez declined to talk about the deaths at the Florida hospital. His e-mailed response did not address many of the questions asked by Fort Worth Weekly but said, “Our company has a long-standing record of providing high-quality mental health services and improved patient outcomes at a savings to the taxpayers in states like Florida, Texas, and South Carolina.”