Benjamin Britten’s music is one of my specialties, as it happens, and it’s front and center for one of my favorite movies of the year, Moonrise Kingdom. I didn’t have space to address the way Wes Anderson’s film uses Britten’s music when I reviewed the movie, but now that it’s out on DVD, here’s my chance to go into depth. Warning: Mild spoilers ahead for the film.

Much like Wes Anderson has done, Britten created a number of works about and for children that nevertheless share the same characteristics and complexity as his ostensibly more grown-up work. Both Britten’s friends and detractors noted that there seemed to be a part of him that stayed a schoolboy, and while the composer of Billy Budd and the War Requiem would seem to have a pretty good handle on adult issues, it’s true that Britten often approached his work as a form of play. This accounts for his music’s often dazzling inventiveness — why yes, I can imitate a Viennese waltz, an Italian opera overture, and a classical bourrée in the same piece! (Variations on a Theme by Frank Bridge) The same spirit of play seems to animate Wes Anderson’s best films, and likewise, he has occasionally been criticized for it. These two artists are pretty well matched in terms of temperament.

Of course, Anderson’s connection with Britten runs deeper than that. The filmmaker sang in a production of Britten’s opera Noye’s Fludde when he was a boy, and a key scene in the film takes place at a staging of that opera. The opera costumes in the film are in fact based on the ones in the production from Anderson’s childhood. (His mother supplied costume designer Kasia Walicka-Maimone with photos.) Anderson’s early experience fueled the decision to use Britten’s music as accompaniment to Moonrise Kingdom.

The movie’s opening sequence is set to the theme from The Young Person’s Guide to the Orchestra, which one of Suzy’s younger brothers plays on his record player. The piece is written for an orchestra and a narrator, but it can be performed without the narrator under the title Variations and Fugue on a Theme by Henry Purcell. (This is actually how it was often done early on in its history, as serious-minded orchestras and broadcasters liked the piece but were uncomfortable with its kid-friendly elements. These days, orchestras want to appeal to families, so they use the narrator.) The music compartmentalizes different sections of the orchestra, which chimes with the way Anderson introduces Suzy and the members of her family. They’re shown in separate rooms and not communicating with each other, indicative of how emotionally disconnected they are from each other. The measured precision of the music matches Anderson’s extensively mapped-out camera movements and mise-en-scene. The work reappears at the end of the film, after Suzy has been reunited with her family. By the way, the recording of Young Person’s Guide used on the soundtrack is the only Britten selection that doesn’t feature the composer himself as conductor. It’s Leonard Bernstein’s recording, which (unlike Britten’s own performance) includes the narration, read by a boy whose name I can’t dig up for some reason. The film’s end credits include Moonrise Kingdom’s composer Alexandre Desplat’s tribute to the Young Person’s Guide, with a narrator introducing each separate instrument as it makes its entrance.

Britten’s Simple Symphony is an earlier work, completed when the composer was 20 years old. The piece has movements with titles like “Boisterous Bourrée” and “Frolicsome Finale,” but it’s the “Playful Pizzicato” that we hear played over both the onscreen narrator’s introduction to New Penzance (the fictitious island where the movie takes place) and a montage of the Khaki Scouts and Captain Sharp searching for the Sam after his initial escape from Camp Ivanhoe. Both of these scenes come early in the film, and the music helps establish the movie’s light, comic tone.

A flashback shows us Sam first meeting Suzy at a staging of Noye’s Fludde. While many of Britten’s operas are written for the opera house to be performed by professionals, Noye’s Fludde is specifically meant for churches or public halls, to be performed by reasonably talented kids whom one might find in a remote area. (Britten famously said “I want my music to be of use to people,” which may not sound radical to you, but it was definitely swimming against the tide, as more composers of concert music in the latter half of the 20th century prized difficulty in their work.) The opera is based on one of the medieval Chester mystery plays; the text of the Noah play is here. Suzy portrays the Raven onstage, a prominent but non-singing role in the opera, although she’s seen singing along with the other children in the animals’ chorus of “Kyrie eleison.” We don’t see her perform the role’s dance element — the Raven’s dance signals to Noye that the waters are receding. The nature of the role seems less resonant with Suzy’s character than the fact that her raven costume, which Sam first sees her in, matches her dark mood (unlike the pink outfit that she wears for most of the movie). We later learn that she has been demoted from Raven to a part in the chorus (a bluejay) after yelling at a teacher. The opera is not divided up into discrete numbers, so the titles of the selections are really just the titles of the tracks listed on Britten’s recording, which was made in 1957. “Noye, Noye, take thou thy company” is the first selection we hear, as the stage Noah warns of the impending flood while Sam goes backstage to find Suzy. Later on, Anderson can’t resist the joke of having a performance of Noye’s Fludde canceled by an actual flood. The coda to the opera, which sets not the Chester text but Joseph Addison’s “The Spacious Firmament on High,” is played on a record at the church where the evacuees are taking shelter. The selection “Noye, take thy wife anone” includes an ecstatic “Alleluia” chorus which forms the background to the climactic sequence when Captain Sharp goes up on the church’s bell tower to rescue Sam and Suzy during the storm. The “Alleluia” is appropriate music for the three characters’ narrow escape from death, and the handbells that Britten includes in the orchestral accompaniment match nicely with the scene’s bell tower location.

“On the ground, sleep sound” is a choral interlude from Britten’s opera version of A Midsummer Night’s Dream, an opera that’s set in a moonrise kingdom if ever there was one. In the opera, the selection is a choral lullaby sung by the fairies to the four mortal lovers who have fallen asleep in the forest. It’s used in the movie as the background for the great montage of Sam and Suzy writing letters to each other while snippets of their rough lives play out silently — Sam is saddled with physical labor at his foster home, Suzy screams at her parents, both of them get into fights with other kids. The shifting chromatic harmonies of the piece (not to mention the coolly detached tone of the kids’ letters) helps prevent the innate pathos of Sam and Suzy’s childhood from becoming too pronounced.

Two selections from Friday Afternoons (or Songs for Friday Afternoons) come into play later in the film. This is an early song cycle composed by Britten for his brother, who was a headmaster at a school where the children took their music lessons on Friday afternoons and needed material for his students to sing. A setting of a poem by Walter de la Mare, “Old Abram Brown” is a nicely unsettling piece that Anderson uses to build up an area of danger as Sam, Suzy, and the Khaki Scouts are making a run to freedom before the big storm hits. The more piercing selection is “Cuckoo!”, which sets a poem by Jane Taylor, who’s better known for “Twinkle, Twinkle, Little Star.” We hear the song first when Scoutmaster Ward tries to console Sam over his impending separation from Suzy. The song then reappears near the end, when Sam sneaks out of Suzy’s house and promises to see her the next day. Despite the song’s brighter hues and the lyrics sung from a bird’s point of view, it’s still filled with overtones of wistfulness and loss. (“In April, I open my bill. / In May, I sing night and day. / In June, I change my tune. / In July, far, far I fly. / In August, away I must.”) When I think of this movie, this is the music that tends to come to mind, with its bittersweet nostalgia running underneath its jovial exterior.

Anyway, Britten’s centennial just happens to be next year, so Moonrise Kingdom figures to prime the audiences for the inevitable centennial performances of his music when they roll around in 2013. Indeed, the sales of this movie’s soundtrack placed Britten at the top of the classical music charts for a while, which is not where he’s usually to be found. His operas, orchestral works, and chorales are eminently worth checking out. Now what I need is an expert on Hank Williams’ music to break down Anderson’s use of his songs in this movie. 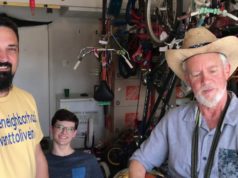