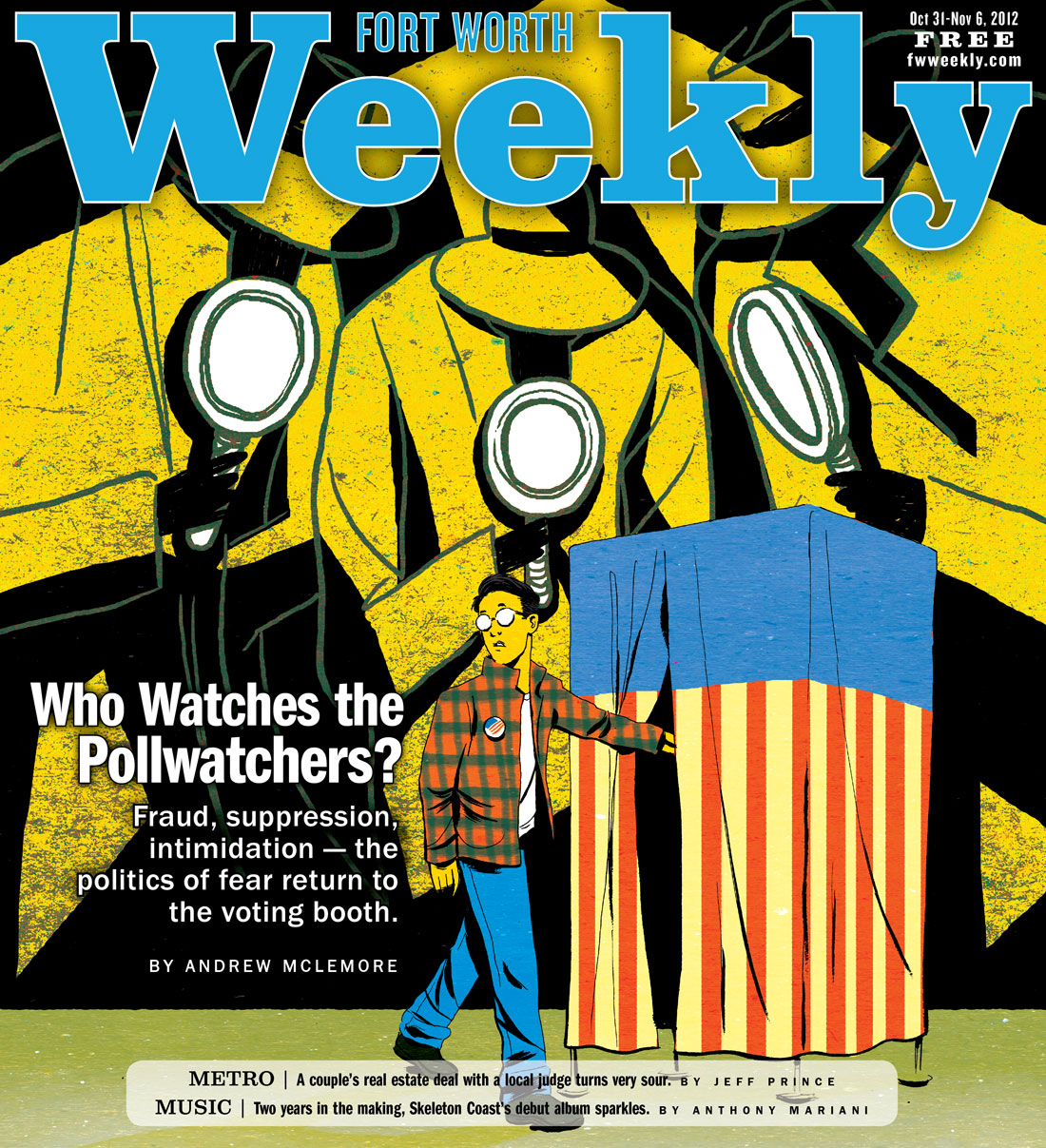 Mark James came in with his mom, Hazel, who said it was her son’s first time voting; she guided him through the process. When an election worker asked Mark whether he wanted to vote electronically or on a paper ballot, he looked to his mother.

Four hours later, another Mark James walked into the gym. The voter list for the precinct had only one Mark James on the books. The election workers surmised this was the boy’s father and asked him if he’d sent someone to vote in his place.

Then you can’t vote, they told him.

Without objection, he thanked them and left the polling place.

This bizarre series of events, described in documents from the county elections office, culminated in a May indictment of Hazel James, a 40-year-old Democrat running for chairwoman in that voting precinct, for conspiring to arrange an illegal vote.

Though sources close to the case said it’s one of just two examples in recent memory of voter impersonation in Tarrant County, conservatives pounced on the story as evidence that Texas suffers from an abundance of cheating at the polls.

Over the last few years, voter fraud has quickly become the Republican Party’s go-to bogeyman, a campfire story told around a witch’s brew of racial and partisan fears. Evidence, critics say, is a garnish.

The voter ID laws passed in the last few years by more than 30 states, including Texas, have received much press. So has the Republican-led redistricting that diluted minority voting power in Texas and elsewhere.

And now there are “nonpartisan” pollwatching groups springing up around the country inspired by Houston-based True the Vote.

An outgrowth of the Tea Party group King Street Patriots, True the Vote fights for “the integrity of the voting process” by recruiting pollwatchers to ferret out anything fishy.

Bill Ouren, the group’s national elections coor-dinator, said at a July training session in Florida that the group wants to make the experience of voting “like driving and seeing the police following you” and aims to recruit a million pollwatchers around the country.

What Republicans call election protection, others call voter intimidation. It’s no coincidence that True the Vote tends to show up at voting places in minority-dominated areas. At the group’s national summit in May, one guest speaker said minority neighborhoods should be targeted because voting fraud isn’t a problem in “nice suburban areas.”

“What they want to do is have very official, stern-looking white people at the polls trying to intimidate black and Hispanic voters,” said Cal Jillson, a political science professor at Southern Methodist University. “Anglos have been trying to do this kind of stuff since LBJ. It’s not a new thing.”

After two years of watching Republican pollwatchers follow voters at Democratic-leaning polling places, mostly in Houston, Dems are now fighting back with their own trained recruits. If True the Vote’s conservative volunteers want to scare away people they see as “suspicious” voters, these pollwatchers aim to protect voters from intimidation –– largely by election workers and other pollwatchers.

Like voter fraud, there’s little evidence for widespread voter intimidation at the polls either. Democrats have almost as much trouble digging up clear examples of intimidation as Republicans do in finding voters dressing up like other people, voting twice, voting as dead people, or voting when they’re not a citizen.

The only thing both parties can agree on is that about half the country’s voting age population doesn’t cast a ballot.

Hazel James may or may not get convicted of voter impersonation, but hers is the first such case in years, and election officials caught the problem without the help of pollwatchers. In Tarrant County at least, Republicans and Democrats both say that pollwatchers should stay out of the way. Neither party claims to want voters to feel policed at the polling place, yet each side is wary of electioneering by the other.

“I expect most of our pollwatchers to be bored,” Tarrant County GOP Chairwoman Jennifer Hall said. “That’s what I hope for.”

In Houston, where a rising tide of minority voters is challenging the Republican status quo, hopes for a quiet election are slim. Elsewhere, it remains to be seen if True the Vote’s aggressive approach will remain an exception and not the rule.

Whether pollwatchers are used to address GOP fears of voter fraud or Democratic fears of voter intimidation, these clipboard-wielding volunteers –– until recently a rare occurrence in any election –– are becoming an increasingly popular tool for the two parties.

Voting is usually a quiet exercise of civic duty by the few people who bother to show up.

Bringing in partisan election workers will either help preserve that balance or make voting more like a UT-Oklahoma football game, full of spectators waving clipboards instead of posters, trying to influence the outcome of something far more important than a touchdown.

The public address system is either broken or the Tarrant County Democrats forgot to bring one, so Sondra Haltom gestures wildly, yelling across the Trimble Tech High School auditorium for two hours.

She speaks too fast, and the 50-foot ceiling sucks her voice away, making it difficult for the roughly 200 people — a mix of blacks, whites, and Hispanics — to hear the slender woman’s talking points.

“If you’re a Republican, you can leave, or you can stay here and learn how to follow the law and do the right thing,” Haltom says.

Haltom is the director of the Voter Empowerment Project, the Texas Democratic Party’s new effort to “counter the voter suppression efforts of the Republican Party and allies such as the King Street Patriots,” the group’s mission statement says.

On this Saturday morning, her job is to coach the crowd of Democratic volunteers on how to protect voters while they serve as election workers or pollwatchers on Nov. 6.

“Thank God,” screams an audience member to loud applause. Yet many voters still believe photo identification will be required, a situation that Republican election officials may try to exploit at the polls, Haltom says.

It’s when Haltom reaches the poll-watching portion of the training that things get interesting. Each candidate on the ballot and both political parties can assign up to two pollwatchers per polling place, which means that the “watchers” can quickly outnumber the three to five election workers trying to keep the line of waiting voters moving along.

Haltom’s lessons on pollwatching are more about respecting voters’ space and privacy than inspecting their every move. She describes the disruptive behavior of pollwatchers in Harris County in 2010, when True the Vote’s crews appeared at minority polling locations across Houston.

“There were lots of problems with these True the Vote pollwatchers, sometimes even peering over voters’ shoulders as they filled out ballots,” Haltom says. “That’s how bad it was. They had to tell pollwatchers, ‘Do not cross this line.’ ”

The Tarrant County Democratic Party plans to have an additional 150 election workers and pollwatchers on duty this November in response to fears that the same behavior might be coming to Fort Worth, whether from True the Vote or other groups following its lead.

It’s certainly possible, but Hall and Brandon Moore, vice chairman of the Tarrant GOP, don’t sound much different from Haltom when they discuss the role of pollwatchers and the importance of staying out of the way.

Neither agreed with the idea that voting should feel like “driving and seeing the police following you.” During Republican pollwatcher training, Moore says just the opposite.

“I tell them: ‘You’re not the police. Don’t call someone out unless it’s an egregious violation of the elections code,’ ” Moore said.

Fort Worth Republicans have also  recruited more pollwatchers this year than in 2008. About 50 will be assigned by each party to polling places during early voting and on Election Day.

The Tarrant GOP has completed several of its own training sessions for pollwatchers and is encouraging volunteers to take True the Vote’s online training course (though only as a supplement to the party’s required course).

Both Republicans and Democrats train pollwatchers to understand the limits of their role during the voting process, said Hall, who believes they help bring accountability to elections.

“Pollwatchers kind of bring light into the room, kind of just make sure everything is going properly,” she said. Hall isn’t worried about her precinct, but she said there are a few others where “things have happened.” She declined to elaborate.

As for accusations of partisan behavior by pollwatchers, election judges (also appointed by political parties) can eject them if things get out of hand, she said.

“I believe sometimes there is intent to vote more than once. Sometimes it’s just an accident. People get confused,” she said. “It’s all of those things.”

“Some locations are not in very safe areas, so this is not for the timid,” Klick wrote.

Dallas Republicans aren’t involved with True the Vote but have recruited and trained pollwatchers for years, said Wade Emmert, the GOP’s county chairman. Like Tarrant County, they’ll be sending volunteers to Democratic polling places they think are “problematic,” Emmert said.

“If True the Vote comes in and does their thing, that’s fine, but we’re going to continue to do our thing,” he said. “We’ve been doing it for a while.”

Tired from yelling through the auditorium for hours, Haltom tells the audience of Democrats that, above all else, they need to avoid the partisan animosity of this newer, angrier crop of pollwatchers. Stay calm, she says. Always stay calm.

“You guys need to be above reproach,” Haltom tells them. “Don’t talk to voters at all. This is what we’re upset about Republicans doing.”