Holy Motors (NR) The first feature film in 13 years by Leos Carax (Pola X, The Lovers on the Bridge) is this surreal piece starring Denis Lavant as a man who is a contract killer, a fashion photographer, a homeless woman, a millionaire business tycoon, and a goblin who lives in Paris’ sewers, among other things. Also with Edith Scob, Eva Mendes, Elise Lhomeau, Michel Piccoli, and Kylie Minogue. (Opens Friday in Dallas)

Alex Cross (PG-13) The 12th novel in James Patterson’s series becomes this poorly made thriller that stars Tyler Perry as a Detroit homicide cop whose pursuit of a psychopathic-yet-still-boring hit man (Matthew Fox) costs him people he cares about. Director Rob Cohen (The Fast and the Furious) proves to be completely lost when it comes to filming a story that actually tries to engage human emotions, and he’s not much better with the uninventive, credibility-straining action sequences. The rotten dialogue doesn’t help him, either. Too bad; Perry’s creditable performance deserved a better vehicle. Also with Edward Burns, Rachel Nichols, John C. McGinley, Carmen Ejogo, Yara Shahidi, Giancarlo Esposito, and Jean Reno.

Cloud Atlas (R) David Mitchell’s supposedly unfilmable novel is turned into this huge, ambitious movie that somehow works even though there’s a few thousand reasons why it shouldn’t. Tom Hanks, Halle Berry, and a bunch of other actors star in six separate plotlines spanning the globe and some five centuries. The intercutting should make for a disjointed viewing experience, yet somehow directors Tom Tykwer (Run Lola Run) and the Wachowski siblings (The Matrix) make the plotlines comment on and strengthen one another, giving us one of the more unlikely creative resurgences we’ve seen recently. In its message about the interconnectedness of all things and the miraculousness of human consciousness, this is more convincing than The Tree of Life. Also with Jim Broadbent, Hugo Weaving, Jim Sturgess, Bae Doo-na, Ben Whishaw, James D’Arcy, Keith David, Zhou Xun, David Gyasi, Hugh Grant, and Susan Sarandon.

Here Comes the Boom (PG-13) Ow! I saw it coming, but I still couldn’t get out of the way. Kevin James stars in and co-writes this comedy about a burned-out high-school teacher and former collegiate wrestler who rediscovers his passion when he turns himself into an MMA fighter to raise money to prevent a music teacher who inspires him (Henry Winkler) from losing his job. James remains charming, but the script is so lacking in comic inspiration that at one point the characters get into a food fight to get laughs. The movie’s better than Won’t Back Down, but nowhere near as good as The Warrior. Also with Salma Hayek, Bas Rutten, Gary Valentine, Charice, Jackie Flynn, Mookie Barker, Nikki Tyler-Flynn, and Greg Germann. (Opens Friday)

Looper (R) In his first big-budget Hollywood effort, Rian Johnson lays down a marker. Joseph Gordon-Levitt stars in this science-fiction thriller as a contract killer in 2044 who disposes of people sent back in time by his mobster bosses in the future. When his aged future self (Bruce Willis) is zapped back to him, it kicks off a complicated plot that’s laid out remarkably well. Johnson’s liberal, expert use of comic relief punctuates the air of gathering dread that he builds up. Even better, the movie doesn’t lose focus in the second half, when the action slows down as the hero hides out at a farm owned by a single mom (Emily Blunt). Johnson’s attempts at emotional catharsis are the tiniest bit off, but that scarcely matters given the scene where an assassin (Garret Dillahunt) dispatched to the farm meets a wholly unexpected end. Like the rest of the movie, it’s breathtaking in its horror and ingenuity. Also with Jeff Daniels, Paul Dano, Noah Segan, Pierce Gagnon, Summer Qing, Tracie Thoms, Frank Brennan, and Piper Perabo.

The Man With the Iron Fists (R) Hip-hop star and longtime martial-arts fan RZA directs his first movie, and it’s a mainline into his fecund imagination. That doesn’t make it good, though. The story is about a shipment of imperial gold that attracts all manner of unsavory types when it passes through a village. The setting is the China of RZA’s mind, a place of silk and jade and badasses spouting Buddhist philosophy. Yet the rudiments of filmmaking slip through his grasp, as the director shows no sense of tone or pace. He also miscasts himself as a stoic, troubled blacksmith. Music historians will analyze this as a key to RZA’s influences and obsessions, but as a movie, it’s flat. Also with Russell Crowe, Lucy Liu, Rick Yune, Jamie Chung, Dave Bautista, Cung Le, Zhu Zhu, Byron Mann, Daniel Wu, and Pam Grier. 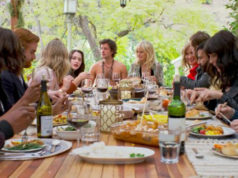 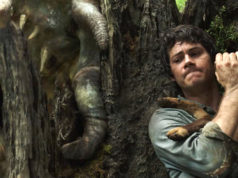 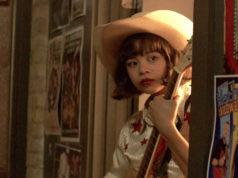