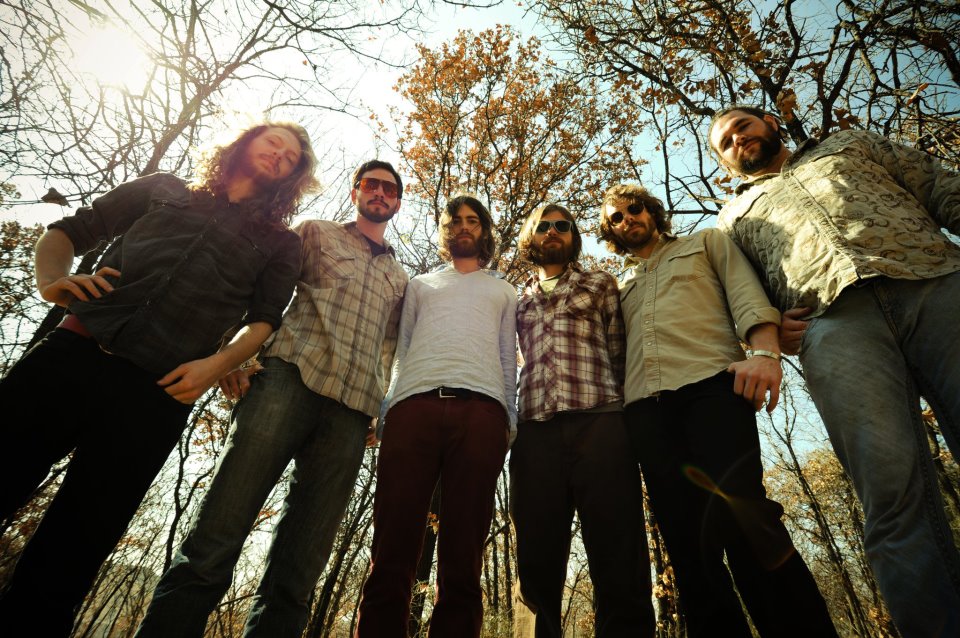 The Hanna Barbarians are an interesting bunch, to say the least. They’re kind of like their own little scene and not only because there are, like, 20 people in the band. (There are six. But you get the point.) It was just a couple of years ago when the band exploded, nearly fully formed, onto the local music landscape, quickly becoming the most talked-about group around. (For some reason, the Barbs have been pretty much completely ignored by Dallas and Denton media outlets, but we all know that writers and bloggers from Big D and Little D acknowledge our scene only out of a weird sense of courtesy mixed with curiosity. “I do say, Tennessee, ambulate over here to the microscoping machine to take a gander at the godless guitar-bearing natives in yon town of cow.” “Mmm, yes, Orville. Very interesting, my good chap.” “Mmm, yes.” “Indeed.”) The Barbs, riding high, began gigging around town constantly, somehow finding time in between sets to record a juicy debut album. Produced at Red Star Recording Studios in Arlington with Robby Baxter, Syzygy was followed by more gigging, mostly locally, and a well-deserved break. In the meantime, two of the guys –– guitarist Alex Zobel and multi-instrumentalist Kris Luther –– went off and formed/joined an instantly successful blooze-rock band, The Longshots. In a matter of months, The Hanna Barbarians, the cocks of the walk, had slipped away into semi-obscurity. But not for long. The Barbs’ return to glory began last month, after they had been chosen along with a dozen other North Texas acts (five total from the Fort) to participate in the Chevy Music Showcase. A nationally broadcast infomercial of sorts for local roots-music scenes, the series started several months ago with a package of segments on Oklahoma City artists. Spotlighting North Texas’ indie roots-music scene was the next logical step for the show’s producers. Barbs bassist Chris Evans said over beers recently at The Grotto that the exposure has led to heavy social media traffic and, more importantly, has simply been fun. Frontman Blake Parish agreed: “Oh, man,” he said. “High school friends coming out of the woodwork.” The Barbs’ march back to the top of the local music heap will continue with the release this weekend of Spaceway Sessions Vol. 1, the first in a series of EPs recorded with producer Will Hunt (Burning Hotels, Holy Moly, Evanescence’s Amy Lee) at his Spaceway Production Studios downtown. The band met him through the Hotels and was immediately sold. “Will is the shit,” Evans said. “He’s on point. He’s on top of his game. You’ll never see Will fumbling. He doesn’t have a goofy moment of the day.” If you’ve seen The Hanna Barbarians onstage over the past couple of months, you’ve probably heard at least one of the three new tracks, most likely “Oh, Warden,” the song the band performs for the Chevy showcase. Sounding like the Stones hungover from a Merle Haggard concert circa 1974, the song –– lazy, sweaty, and bluesy, with harmonica and fuzzy guitars –– is suffused with old-timey rock ’n’ roll goodness: “Oh, warden, won’t you let me in,” Parish sings, his voice rough but loud. Then the music comes to a full stop: “I been foolish with my freedom again.” And then, bam, it picks right up again. The EP’s killer-est joint, though, is the second track (mislabeled as the third track and vice versa). A honking, thunderous head-banger, “Way Down” finds the Barbs at their heaviest –– and best –– serving up a riff that seductively crawls around the low strings and a simple, melodious, effective chorus. The track also is essentially two songs in one, transforming from about the midway point on into a moody, meditative dirge, with Parish and Zobel harmonizing beautifully on vocals. The Hanna Barbarians will celebrate the release of Spaceway Sessions Vol. 1 on Friday with Dallas’ Dovestep at Keys Lounge (5677 Westcreek Ct., 817-292-8627). The $10 cover charge includes a free copy of the EP; vinyl copies will be available for sale. Spaceway Sessions Vol. 2, featuring guest performances by Fort Worth keyboardist Andrew Skates (Telegraph Canyon), saxophonist Jeff Dazey (Josh Weathers, EPIC RUINS, Dazey Chain), and vocalist Christa Russell, should be out by the beginning of 2013. The goal is to keep pumping out quality recordings, to stay on everyone’s (at least Fort Worth’s) radar, and maybe compile them into a full album at some point (“Death of the Album?” Oct. 3).