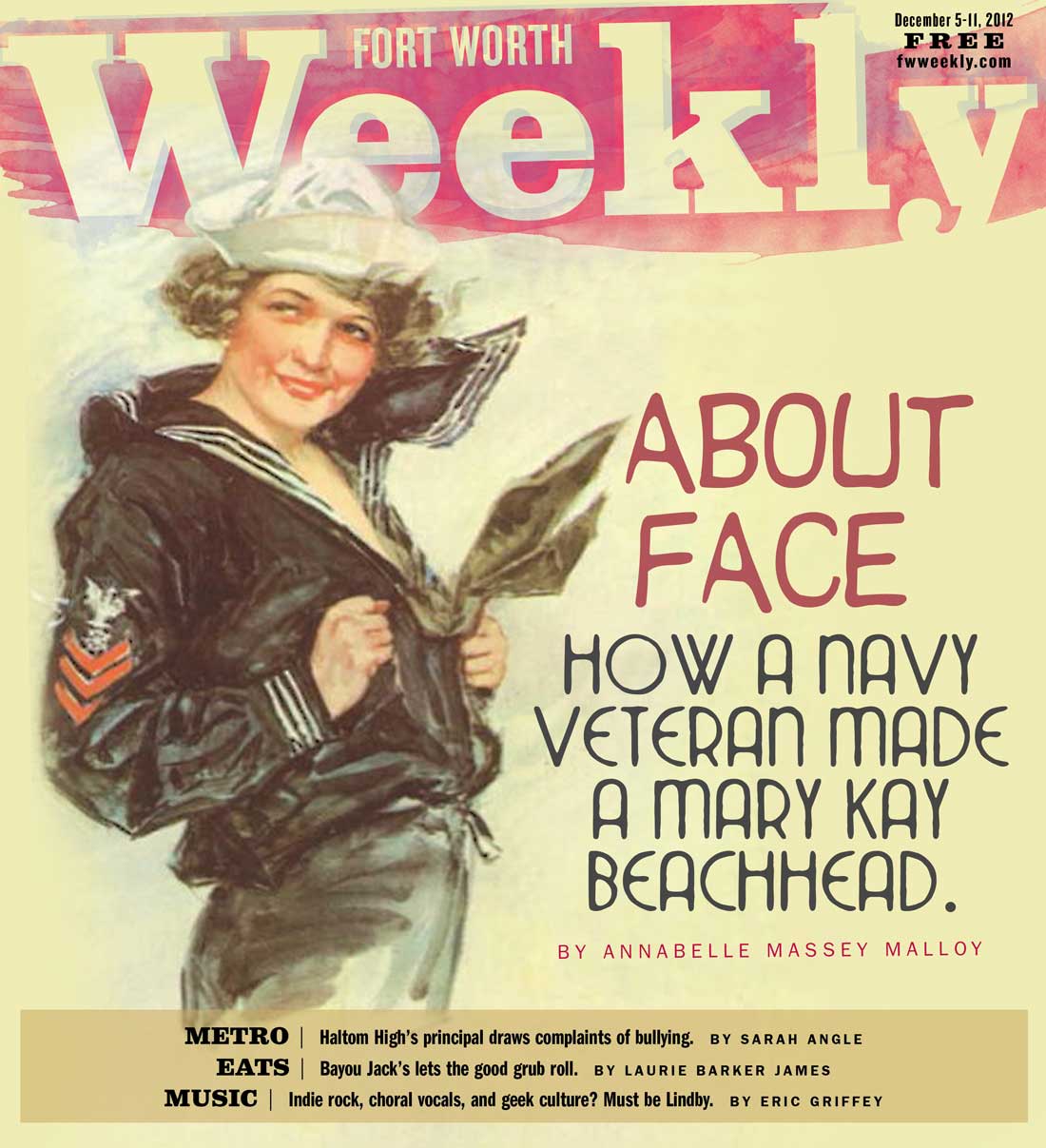 Being a woman in the U.S. Navy was a tough job, Debra Cardenas said. Meaning, you had to be tough to survive.

Women who wanted to do something beyond secretarial jobs, she said, “had to carry themselves in a different way. We couldn’t pay attention to people’s feelings. We had to be crusty.” She mentions Meryl Streep’s role in the movie The Devil Wears Prada. “Do you remember how she acted? How tough and mean she was? That’s what you had to be like in the Navy.”

Suggesting a fashion editor as a role model for Navy women was perhaps no accident. Cardenas is in her second career now. She’s shed her uniform in favor of a snazzy sales director’s suit, lots of pink, a multi-step skincare routine, and flawless makeup.

These days she’s taking the discipline she learned in 32 years of helping the Navy get its many jobs done and turning it toward helping women feel pretty and confident — and helping an older Fort Worth neighborhood get its own makeover. With panache and an entrepreneur’s spirit, she has become something of an innovator among the women who work for the cosmetics giant. And sell? She had me unearthing lip gloss memories within the first five minutes after I met her.

She’s dropped that crusty Navy facade and forced competitiveness in favor of the Mary Kay emphasis on women supporting women. And she loves it. “I ached for girlfriends and girl time when I was in the Navy,” she said. “There were very few women in the service with me.”

There’s a bit more flexibility in the highly structured Mary Kay organization than there was in the U.S. Navy.

The irony isn’t lost on Cardenas. “I went from combat boots to cosmetics,” she said.

Women weren’t assigned to combat posts when Debra Cardenas joined the Navy back in 1981. She served in “behind-the-battlefield” tours of duty, often working as a supply coordinator or in recruitment offices. She was on active duty for three years and in the reserves the rest of the time, getting called up for every signficant military action and putting in reserve duty most summers. She spent most of her career as an enlisted person, making it to officer rank only shortly before her retirement.

“I served at sea only once, in 1999, on the USS Inchon stationed off the coast of Kosovo,” she said. The ship traveled in an endless rectangle — “a big box, over and over” — providing supplies and medical care for the troops on the ground. “I don’t know if people realize there is a ‘green Navy’ and a ‘blue Navy,’ ” she said. “There is a lot of on-the-ground work for Navy service people.”

The USS Inchon was an older ship, Cardenas said, with makeshift quarters for the 80 women aboard. “It was terrible,” she remembered. “Three showers and three sinks for 80 women. That’s roughing it.”

Camaraderie among the women sailors was almost nonexistent. “There was a lot of competition and even backstabbing with the other women,” she said. “It was assumed you were playing around with the Navy men to get ahead, especially if you were too happy or too feminine.”

Just as the Navy’s slogan suggests, Cardenas’ tours of duty took her all over the world — to Pearl Harbor, El Salvador, Bahrain, and Norfolk, Va. She was often close to — but escaped — harm’s way.

She saw Operation Desert Storm, the first of the Gulf Wars, on the ground with the Navy in Bahrain. “We worked at a relatively new, small base without barracks, so we stayed at a hotel in town,” Cardenas said. “We couldn’t wear uniforms because we were women in the Middle East.”

The local tradition of women’s suppression was stark, she said. “Saudi Arabia is connected by a big bridge to where we were in Bahrain. There is no alcohol permitted in Saudi, so a lot of men would come over the bridge to drink and party at our hotel and some others nearby every weekend.”

Cardenas recounted an incident with a Saudi civilian that haunts her even today. “The guy stalked me most of the weekend and finally started rubbing up against me in the hotel pool, pushing me hard against the side.” One of her fellow servicemen intervened quickly, but Cardenas has never forgotten her fear. “Since that day, when I think about the idea of personal space and the things we women can take for granted in this country, I am very appreciative.”

Her favorite tour of duty was much more pleasant, she said, but sad in a way that made her also appreciate American life.

“Our job was to help out at an air base in Sierra Leone, Africa, in the summer of 1996. We were the middlemen for the evacuation of the embassy staff and other Americans from Monrovia,” Cardenas said. “War was breaking out, and we were helping people coming in on helicopters to board the planes. Our planes were coming from Senegal or other places, but there were quite a few breakdowns.”

Her supposed two-week tour lasted 30 days. She was out on the tarmac of the airfield every day, and every day she watched local children racing toward stacked pallets of supplies as they arrived. “These were 3-, 4-, and 5-year olds, rushing out there while the rotors were still turning or as planes were taxiing in or out,” she said.

“They weren’t trying to get the supplies. They were tearing off big sheets of plastic that covered the supplies and running away with it.” Cardenas learned that the children took the plastic to their families in camps and villages to put on the roofs or the floors of their huts. “All that risk and danger, and the children were so young. It was heartbreaking.”