The Cowboys quarterback has got mega-talent and puts up great stats. He’s a nice guy. You want him to win. You know he wants to win. You’re sure he’ll prevail eventually.

But he just can’t finish. He chokes when it counts most. He’s cursed.

Yep, the Danny White era was tough for about seven years back in the 1980s.

Oh, you thought I was talking about current quarterback Tony Romo?

Romo wishes he could be compared to White.

Fans have long regarded White as a big disappointment.

So where does that leave Romo after another choke (three interceptions against the Redskins) and a sixth disappointing season as starter?

Well, if you continue the comparison to White, then Romo has maybe one more season as a starter before being benched in favor of a younger, worse quarterback (remember Steve Pelluer?) while the Cowboys find the young gun of the future (remember Troy Aikman?). 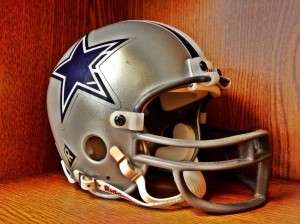 Romo followed Quincy Carter, Chad Hutchinson, Vinny Testaverde, and Drew Bledsoe — and five years of fan agony. Romo could have had half of White’s success in the playoffs and still been viewed favorably.

Instead, he’s choked when it counts most in December.

I still like Romo. He plays hard, he’s fun to watch, and he helped make nearly every game this season completely entertaining. There is a lot to be said for that.

But just as White’s benching in 1987 made way for No. 1 draft pick Aikman, it’s time to look beyond Romo and find our own Robert Griffin III, Cam Newton, or Andrew Luck.

He’s not even Danny White.