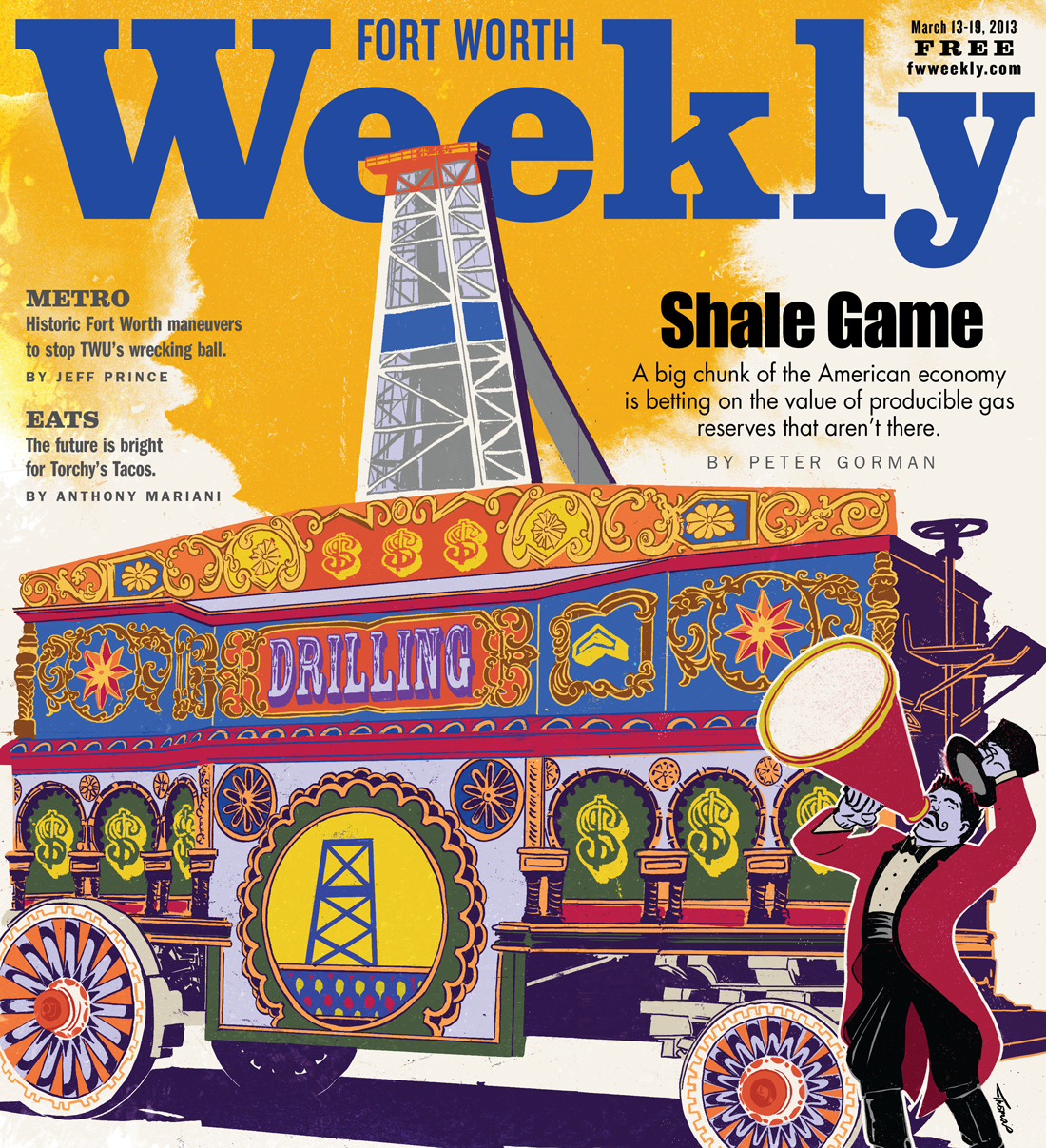 The early days of the shale gas boom around Fort Worth were heady ones. Chesapeake tossed money around as if it were limitless. Need a new museum of science and history? They helped cover it. A sponsor for the annual Thanksgiving parade? Done. Chesapeake hired actor Tommy Lee Jones to plug the benefits of natural gas with tag lines like “Let’s get behind the Barnett Shale” and “It’s here for good.” The industry group, Natural Gas Alliance, claimed the gas was going to flow for 100 years.

But is it? Two new and significant papers related to the finances of gas drilling and natural gas suggest the natural gas boom will not be here for anything like that long. The vast reserves touted by Chesapeake and every other natural gas company, and echoed by state and federal government agencies, have turned out to have been either mostly hype or so inaccessible that they don’t count for practical purposes. In just a few years, the boom has nearly gone bust, and it is beginning to drag a lot of communities and investors down with it.

Why? First, according to the authors of the reports, because the reserves simply are not there. And secondly, because a push to extract as much gas as possible from each field as quickly as possible has produced a glut on the market, which has caused natural gas drilling to be unprofitable in all but the very best areas of the best shale fields.

The drop in price, however, encouraged a lot of industries, including power companies, to retrofit their plants for natural gas rather than coal or oil. And without an abundant supply of gas over the long haul, that may prove very costly for consumers once the surplus of cheap gas is gone. Add to that a new wrinkle that not many people saw coming — the exportation of natural gas to countries willing to pay a premium for it — and the cost of natural gas in the United States could increase tremendously in the next five to 10 years.

In a paper published in February, Deborah Rogers, a former member of a Federal Reserve Bank of Dallas’ advisory council, described how the early years of the shale boom led gas drillers to borrow wildly so that they could get wells in before their leases expired. That caused an excess of natural gas, which dropped the prices to record lows.

And then the sky really fell in: The wells, especially in “sweet spots” like the Fort Worth section of the Barnett Shale, saw declines in production that no one could have imagined.

But the banks that had lent all that money to the energy companies needed their loans repaid, so energy companies had to keep drilling new wells to maintain production volumes. It looked good on paper and kept stock prices at reasonable levels for a few years, but with a couple of exceptions, nearly all of the gas companies have seen their stocks nosedive in the last year.

In the second paper, also published in February, geologist David Hughes, who worked for the Canadian government for 32 years, breaks down how quickly the major shale plays in the United States are being depleted. Hughes draws the conclusion that many, if not most, shale gas wells in this country will run dry in 10 years or less –– leaving a lot of investors holding worthless stock.

It’s an ugly picture –– for drillers, investors, banks, and all the industries that are retooling to use cheap gas that may not be there.

“I think the big winners in the game have already bailed, and a lot of people down the food chain are going to get burned in a few years,” Hughes told Fort Worth Weekly.

Hughes figures that shale drillers probably believed their own hype when they first married the hydraulic fracturing process (which uses high-pressure liquids to crack open shale rock and release the natural gas trapped inside) with horizontal drilling in 2002 in the Barnett Shale. “Initially, the drillers were comparing these to conventional gas wells,” he said, in which production drops quickly after the first year but then remains relatively steady, declining slowly over many years.

But, Hughes said, it couldn’t have taken long for the drillers to realize that their wells would reach terminal decline much more quickly. “The rocks in shale drilling are so impermeable that when we crack them, the gas is released much more quickly. So these wells may last 10 years or only six or seven before they have to shut them down. They’re so new that we have no history to show they will last more than 10 years.”

It makes business sense that if you are trying to get people to invest in your company, you use the most optimistic estimates and claim the wells are going to last decades — “but nobody knows that,” said Hughes, “and looking at the rate of decline in production, well, they’re not going to last very long at all.”

The decline Hughes is talking about is steep. In the shale plays that produce nearly 90 percent of all shale gas in the United States — the Haynesville Shale in East Texas and Northern Louisiana, the Barnett Shale in Tarrant and several surrounding counties, the Marcellus Shale, which stretches from Eastern Ohio through Pennsylvania and south to West Virginia, and the considerably smaller Fayetteville, Eagle Ford, and Woodford plays — the decline in production averages more than 85 percent in the first five years.

When the Haynesville Shale, discovered by Chesapeake founder Aubrey McClendon, began to produce in 2008, gas companies flocked to buy leases and drill. By 2010 there were 180 drilling rigs working the play, and by 2012 more than 2,500 wells were producing.

But optimism turned to pessimism quickly: The production from the wells dropped 68 percent by the end of the first year, and by the end of four years, the average well was producing at less than five percent of its initial level.

“What you have to remember when looking at a shale play is that drillers head for the sweet spots first, the places with the most accessible quantities of gas,” Hughes said. “When the first few wells come in, a leasing boom follows. But the majority of the wells drilled are not going to be in the sweet spots — maybe only 15 percent will be. So when we look at the drop in the Haynesville play, what we’re seeing is that if the sweet spots are drying up, drillers wind up going after less productive areas in the play. But with the cost of each new well in the Haynesville at about $9 million — and that doesn’t include the leasing rights or costs of pipelines and so forth — and the price of gas at $3.30 per thousand cubic feet, who in their right mind is going to keep drilling?”

He pointed out that the number of drilling rigs active in the Haynesville has dropped from a peak of 180 in 2010 to 20 this year. “In the life cycle of a gas field, the Haynesville, at four years old, is already in late middle age,” he said.

In the Barnett Shale, where the average drop in production is about 30 percent each year, Hughes said, “You need to drill 1,500 new wells every year, each of which has the same average first-year production of a 2011 well, to simply keep [total] production flat.”

Julie Wilson, Chesapeake’s vice-president of urban development, said the company currently has only two rigs in the Barnett Shale.

So why did the companies keep drilling those wells, continuing the overproduction  that meant they were selling their precious reserves at bargain-basement prices?

“It started with the land leases,” Hughes said. “Those leases have to be drilled in three to five years, or you’ve lost your investment.”