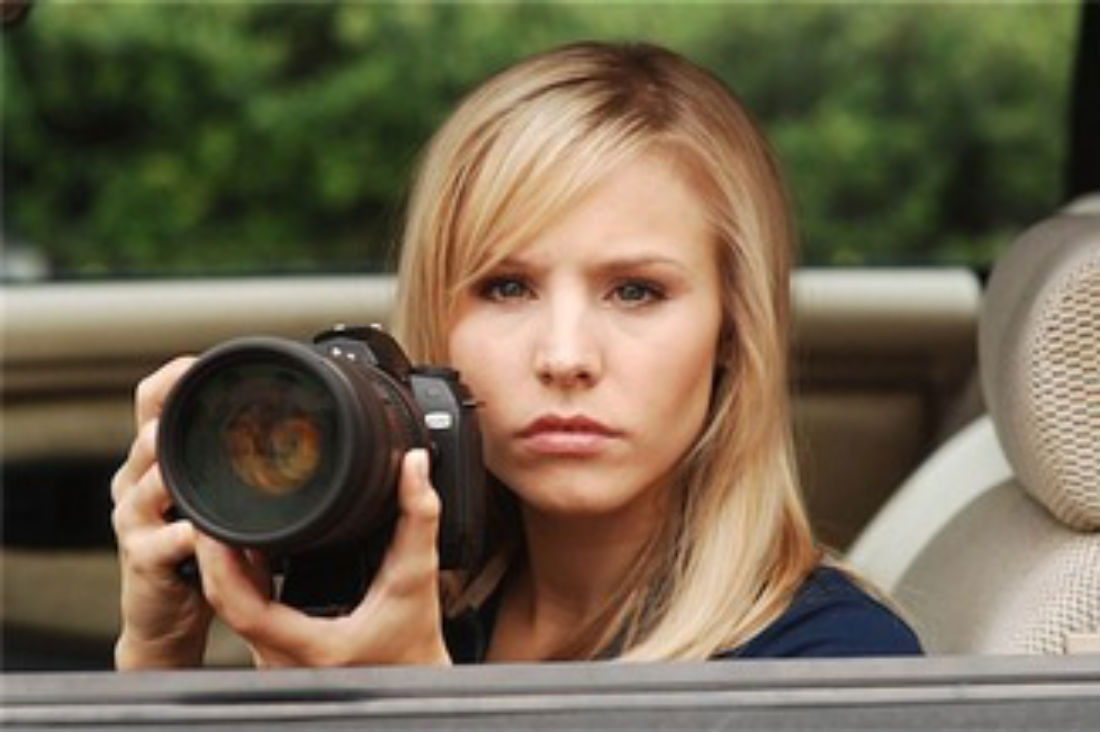 It’s not often that a TV show that has been off the air for six years makes headlines, but that’s exactly what has happened with Veronica Mars. The show first aired on UPN in 2004, then later moved to the CW when those two networks merged. Despite raves from TV critics, the show never garnered huge ratings; it was only the show’s hard-core cult following that kept it on the air until 2007. Yesterday, show creator Rob Thomas and star Kristen Bell announced a Kickstarter campaign for a feature film that would continue the adventures of the no-longer-teenage detective. Their target was to raise $2 million for the film in 30 days to get the project greenlit. They didn’t need that much time; the movie reached its target in less than 12 hours, breaking all sorts of Kickstarter records. Veronica will live again on the big screen.

I can’t tell you how happy this makes me. My work watching films generally makes me slow to catch on with TV shows, but I was with Veronica from the beginning. That first season remains one of the greatest seasons of any TV show ever. Seriously, stop reading this column and go find it on DVD right now. The setup of the show is that Veronica (Bell) used to be a one of the popular kids at her school, but she fell from grace after her best friend Lilly (Amanda Seyfried) was murdered and Veronica refused to denounce her father (Enrico Colantoni) the sheriff of their seaside California community who seemingly botched the investigation. She paid an even heavier price by going to a party afterwards to put on a brave face for her enemies — she wound up being drugged and raped, which leads to her line: “Do you want to know how I lost my virginity? Because so do I.” (Ouch, ouch, ouch!) She has told no one about the rape, least of all her father, who loves her very much and carries a gun, but she spends the first two seasons stomping around her school with an attitude of “no one can hurt me any more and everyone needs to get out of my way,” which makes her endearing and also puts her in some danger. Solving Lilly’s murder is the overarching mystery of Season 1, but each episode has its own mystery to solve as well, with Veronica helping her dad out in his new business as a private investigator.

Other shows have had to balance this sort of big plotline with episode-sized smaller plots, but I’ve yet to see a program do it this well, with plot twists perfectly placed and the action rising and falling brilliantly. I spent 2004-05 in a Veronica-induced fog; between each Tuesday I was busy turning around all the show’s mysteries in my head: Is Logan’s mother still alive? Who raped Veronica? Yet all the cases of the week proved compelling in some way. Episode 3 (“Meet John Smith”) has Veronica helping a nerdy fellow student track down his dad, which proves to be hideously more complicated and painful than the job looks to be, while Episode 4 (“The Wrath of Con”) features flashbacks about Veronica’s relationship with Lilly that are charged with a powerful sense of loss. Then there’s Episode 21 (“A Trip to the Dentist”), in which Veronica tracks down her rapist and confronts the guy on his front doorstep. I remember watching that scene and saying out loud to no one in particular, “Oh, this is horrible! This is so, so horrible!” Yet for all the hell Veronica goes through, she never loses her ability to make a joke out of things, which is another reason why we love her.

The show had a well-drawn cast of characters, too, most fascinatingly the aforementioned Logan (Jason Dohring), the ex-boyfriend of the murdered Lilly, who starts out as a psychotic jackass (per Veronica’s description of him) and then turns out to be one of TV’s most complicated characters. Real-life spouses Harry Hamlin and Lisa Rinna play Logan’s parents and draw such a compelling portrait of a poisonous marriage that you wonder how their offscreen marriage was faring at the time. You’ll recognize the guest stars, many of whom were on the show before they were famous: Jessica Chastain, Melissa Leo, Jane Lynch, Leighton Meester, Aaron Paul, Max Greenfield, Adam Scott, Anthony Anderson, Alyson Hannigan. It’s well worth sitting through the distracting Paris Hilton cameo in Episode 2 for all that. In addition, the relationship between Veronica and her dad is a movingly rendered study in loyalty and support. The tiny Bell is in almost every scene in the first season, and she holds up quite well under that relentless exposure, bright and clever on the frequent occasions when Veronica cracks wise, but also showing the deep reserves of pain and righteous anger that drive Veronica forward. (No wonder Bell has been stumping for the movie for years; she hasn’t had nearly as rewarding a role in her movie career.) Oh, and this also happens to be one of the great TV shows about high school ever, piquantly satirizing all the self-important personality types you meet there.

Anyway, industry observers are now busy writing pieces on what it all means for the future of movie financing and whether we can now expect crowdfunded big-screen versions of other deceased cult shows like Undeclared or Jericho or Rob Thomas’ own Party Down. (Arrested Development is already set to live on.) My fear is that the Veronica Mars movie will suffer the fate of Serenity, Joss Whedon’s 2005 big-screen version of his short-lived science-fiction Western Firefly. Fans of the show cheered when the movie version was announced, and then the film itself made barely a ripple. That’s because TV shows don’t need nearly as many fans to be a hit as a movie does. A show like Mad Men has maybe 2.5 million regular viewers. That’s great for AMC, but if 2.5 million people buy tickets to a movie’s opening weekend, that translates to somewhere between $15 and $20 million at the box office. That might be enough to lead a slow moviegoing weekend, but it’s not really enough to make the Hollywood suits rethink their business model.

I’ll be content just to see Veronica continue her exploits in any medium. Use the comments section below to rejoice with me, fellow Veronica Martians, or tell us which other defunct show you would contribute your cash to revive. As for me, I might just pony up $25 for that Veronica Mars T-shirt the producers are offering.