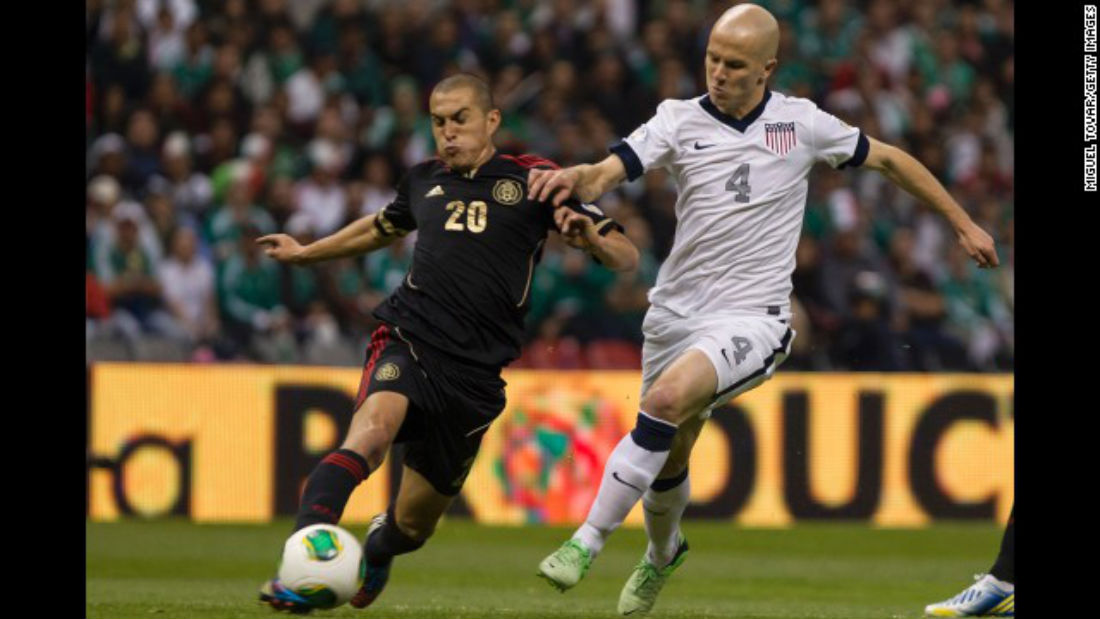 Having watched both the recent USA World Cup qualifiers — the 1-0 victory over Costa Rica in Denver’s driving snow, and the tense goalless thriller in Mexico City — I thought I’d assess where all of USA’s soccer players are in terms of their importance to the national squad and how likely they are to be on the plane to Brazil for World Cup 2014 (assuming, of course, that USA qualifies for the tournament). I got this idea from Football 365, which does a similar semi-regular feature like this for England’s players. Since I’m not aware of anyone on our side of the pond who does this for USA, I’m taking the ball and running with it. We’ll revisit this in the future.

1. Michael Bradley
The former coach’s son has raised his game to all-world level since joining AS Roma, even though that team is crashing and burning around him. Against Mexico, his composure and passing in the middle of the park was key to keeping USA’s spirits up. If he keeps developing like this, he’ll be one of the world’s best midfielders by 2014. Heady thought.

2. Clint Dempsey
The years of competing every week against England’s top-flight teams have seasoned him for the biggest matches. Now it’s a matter of getting enough playing time at Tottenham Hotspur to keep up his attacking edge.

3. Jozy Altidore
Not sure why Jürgen Klinsmann took him off just after halftime in Mexico; his link-up play with Bradley and Dempsey was generating what few offensive chances USA got in that game. He looks much sharper and more fluid than he did at World Cup 2010, and USA’s lack of depth at the striker position just makes him that much more important.

4. Landon Donovan
Has a legitimate case as USA’s greatest player ever, yet it would undoubtedly be easier for us if he weren’t such a flake. Maybe he really only needs this time off to recharge himself mentally; if he comes back at his old skill level, he’ll be indispensable. Until he does come back, we’re left to twiddle our thumbs and wonder.

6. Omar Gonzalez
The LA Galaxy man really nailed his colors to the mast with his imperious showing against Mexico, winning headers, intercepting passes, and using his speed to keep up with Javier “Chicharito” Hernández. And he’s only 14 months removed from an ACL tear. If he stays injury-free, he’ll be a rock in central defense.

7. Matt Besler
Aside from one incident when he almost knocked in an own-goal against Mexico, the Sporting Kansas City defender also looked good alongside Gonzalez in the cauldron of Azteca Stadium. With the aging of the older generation of central defenders, the performance of these two bodes well for the future.

8. Geoff Cameron
Stoke City have been using this all-around defensive player as a right back, and that’s where he played in USA’s two recent matches. His versatility will probably ensure his spot on the roster, but if he keeps starting at Stoke, USA’s other fullbacks may want to watch their backs.

9. Brad Guzan
Have we got a goalkeeper controversy on our hands? Guzan played the last two qualifiers because Tim Howard broke his back (not as serious as it sounds). The Aston Villa keeper kept two clean sheets, and while you can argue that his defenders/the snow in Denver kept shots off him, he still looked commanding out there, especially when clattering into Jesús Zavala just before halftime in Mexico. Combine his form with the dip in Howard’s play recently at Everton, and Guzan wouldn’t be unjustified in thinking that he should be starting in goal for USA. Then again, maybe Guzan’s showing will push Howard to raise his game. The situation bears monitoring over the next 14 months, but having too much talent in goal is a problem many countries would dearly love to have.

10. Timmy Chandler
The Nürnberg right back missed the qualifiers with injuries. He could still play his way back into the conversation for starting at right back when he gets healthy, but Klinsmann may very well decide that he’s a better option at left back. We can’t know more until he comes back.

11. Herculez Gomez
The Santos Laguna striker filled in dutifully at left wing for the two qualifiers, but he’s far better suited to playing around the opponent’s net. He didn’t generate much offense from the wing spot, but his willingness to play out of position won’t go unnoticed. If USA is at full strength, Gomez can move to a forward position where he can be more useful.

12. Jermaine Jones
Played well against Costa Rica before an injury forced him out of the Mexico game. At his best, he’s a great midfield partner for Bradley, passing well and muscling out attackers before they can get into threatening positions. Yet the giant chip on his shoulder makes him a yellow card waiting to happen. He’s no good to USA if he’s suspended; he’ll have to watch that.

13. Clarence Goodson
Started the Costa Rica game and coped well even though he was too hurt to play in Mexico. Given how Besler played in his place, Goodson really took one for the team by taking himself out. Let’s hope his sacrifice doesn’t go unrewarded.

14. DaMarcus Beasley
Didn’t expect to see you here. Injuries to various fullbacks meant the little winger was shoehorned into the left back position for the two qualifiers, and he coped better against Costa Rica’s snow-hobbled wingers than he did against Javier Aquino in Mexico City. His experience, left-footedness, and ability to play either the wing positions or as a left back might just get him a seat on the plane.

15. Maurice Edu
Helped clog up the middle of the field against Mexico, but didn’t offer much more. Why did Stoke bother to acquire him if they weren’t going to play him? If he’s playing regularly, he can be useful filling in at central midfield or central defense. Let’s hope his Turkish club Bursaspor can raise his game.

16. Brek Shea
The former FC Dallas player didn’t play enough in the two games to move the needle, but Klinsmann still wants to see what he can do in USA’s uniform. So do we.

17. Terrence Boyd
If he keeps scoring goals in the Austrian league, he might develop into some much-needed cover for Altidore.

18. Chris Wondolowski
He just keeps scoring for San Jose. Still, he must impress in the remaining qualifiers and prove that he can produce at the international level.

19. Juan Agudelo
Brought along to the U.S. team perhaps before he was ready, but he seems to be finding his feet at Chivas.

20. Bill Hamid
I’m not sure why everybody brings a third goalkeeper to the World Cup, but they do, and the DC United keeper looks as good a bet for this spot as anyone.

21. Kyle Beckerman
The dreadlocked one didn’t see the field against either Costa Rica or Mexico, but the memories of him playing well in last year’s friendly win at Azteca are still fresh.

22. Sacha Kljestan
Same old story — slick passer in the middle of the field, too easily muscled off the ball.

23. Steve Cherundolo
He can still get it done at the right back position, but let’s face it: He’ll be 35 years old at the next World Cup, and specialist right backs don’t often get on World Cup teams unless they’re starting. With all the competition for that one slot, he needs to make a compelling case for himself.

24. Carlos Bocanegra
Gee, it looks like it might be curtains on the longtime USA captain, especially if he’s having trouble getting playing time at a second-division Spanish team at Racing Santander. Klinsmann took a lot of heat for dropping him, but it turned out to be the right call, even if he could have used Bocanegra late in the Mexico game to replace the fading Beasley. Bocanegra’s experience and ability to play left back are still in his favor, but he needs playing time at club level.

25. Oguchi Onyewu
The good news: He’s on a Champions League team. The bad news: He’s buried on the bench at Málaga. This puts him in the same boat as Bocanegra. 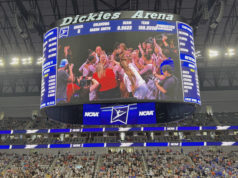