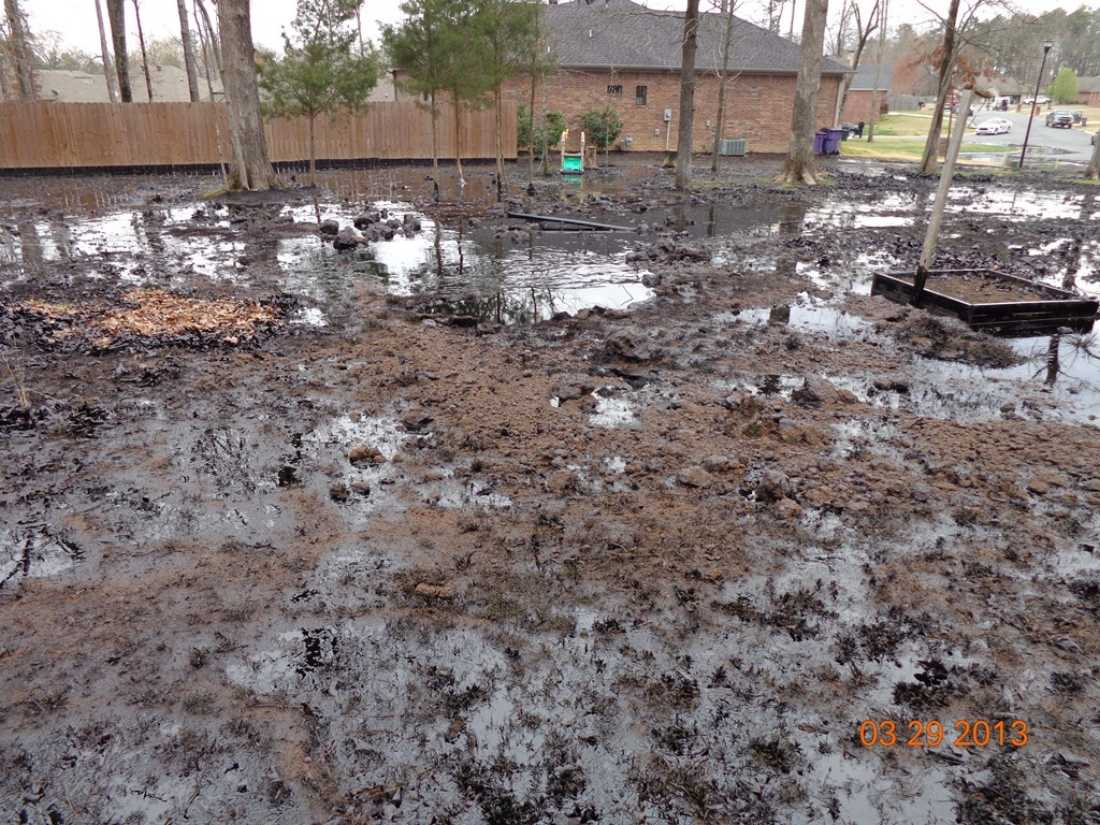 What do you get when you fill a 65-year-old pipeline with the most corrosive hydrocarbon possible, stuff so heavy that it has to be thinned with poisonous gases just to push it through the line?

That’s not a joke, so don’t wait for a punch line.

What you get is a rupture in Exxon’s Pegasus pipeline, carrying Canadian tar sands bitumen from Pakota, Ill., to Nederland, Texas. At least 210,000 gallons of the stuff, which is nearly impossible to clean up, spilled on March 29 into a residential neighborhood in Mayflower, Ark. The tarry muck covered streets and yards and forced the evacuation of more than 20 families. It’s being cleaned up as quickly as possible, according to spokespersons for Exxon.

But … how is it being cleaned up? A similar spill into the Kalamazoo River in Michigan in 2010 still hasn’t been remedied, since tar sands bitumen sinks into the ground, both on dry land and in riverbeds. The Arkansas spill is smaller than the one in Michigan, but some of the sludge has already gotten into drainage ditches and is approaching nearby Lake Conway, a man-made fish-and-game spot.

Even worse, while Exxon has released photos of vacuum trucks sucking up the spill, they’re not releasing photos of what they’re doing with a lot of the sucked-up stuff: They’re dumping it again, this time into nearby wetlands. No one, including people who own property in the spill zone, is being allowed to photograph the spill. And a “no fly zone” has been instituted, allegedly to keep other craft out of the way of helicopters carrying people who are mapping the spill. And to keep away pesky TV crews and news photographers, no doubt.

Despite a police checkpoint keeping residents, journalists, and others out of the area, members of the Tar Sands Blockade managed to get into the wetland area at dusk recently and took photos and video of the area covered in the toxic sludge. At some points, the dumped bitumen was covered in single sheets of paper towels, presumably to absorb some of the stuff before it sinks. (Now that’s a hefty paper towel.) In one of the videos the narrator notes that this would normally be a duck breeding ground at this time of year. Several ducks have already been found dead, and more than a dozen oily birds are being treated at a nearby animal shelter.

The kicker? Just like TransCanada has done with its Keystone XL pipeline, Exxon has gone to court to prove that tar sands bitumen is not heavy crude oil in order to avoid paying the crude oil excise tax, income from which goes into the Oil Spill Liability Trust Fund that pays to clean up such spills. Yet Exxon, like the folks at TransCanada, says tar sands bitumen is crude oil for the purpose of taking private land from U.S. citizens via eminent domain. When it comes to the tar sands, what’s going on in boardrooms and courtrooms and back rooms smells a lot worse than what the industry is spilling into our waterways and groundwater.