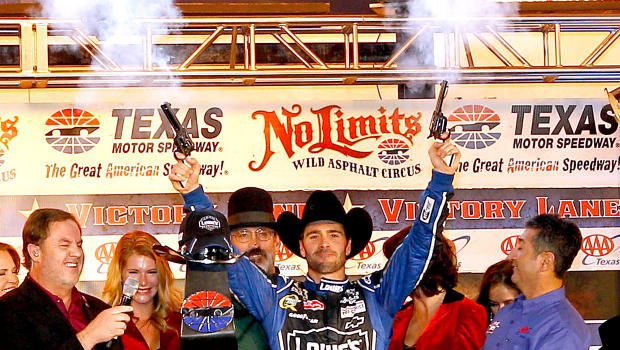 File this one under “Good Luck, Pal”: A U.S. senator from Connecticut has asked the Fox Network’s famously right-wing chief exec Rupert Murdoch to cancel his channel’s broadcast of tomorrow night’s NASCAR Sprint Cup race, which of course happens at Fort Worth’s own Texas Motor Speedway. That race is sponsored by the NRA, and Sen. Chris Murphy says it would be unfair to give so much free publicity to Wayne LaPierre’s ultra-powerful gun rights lobby while U.S. senators debate new gun control legislation.

I’m 100% sympathetic to the cause of tougher gun restrictions in this country. It boggles my mind that passing a federal assault weapons ban is considered as likely as discovering a herd of unicorns grazing on the National Mall. These things just don’t happen in the reality-based world, apparently.

But I also can’t get too worked up over the unholy union of Fox, the NRA, and NASCAR. Whether you like them or not, there’s some kind of natural law –– call it a white-trash gravitational pull –– that unites these like-minded organizations into a perfect trinity. They belong together like vienna sausage, white bread, and Miracle Whip. Or meth, Mountain Dew, and tooth decay. Or Hank Williams Jr., drunken groupies, and penicillin. Politics aside, can anyone seriously challenge the Cheeto-stained harmony of these institutions? It’s a trio that just feels right at a gut level.