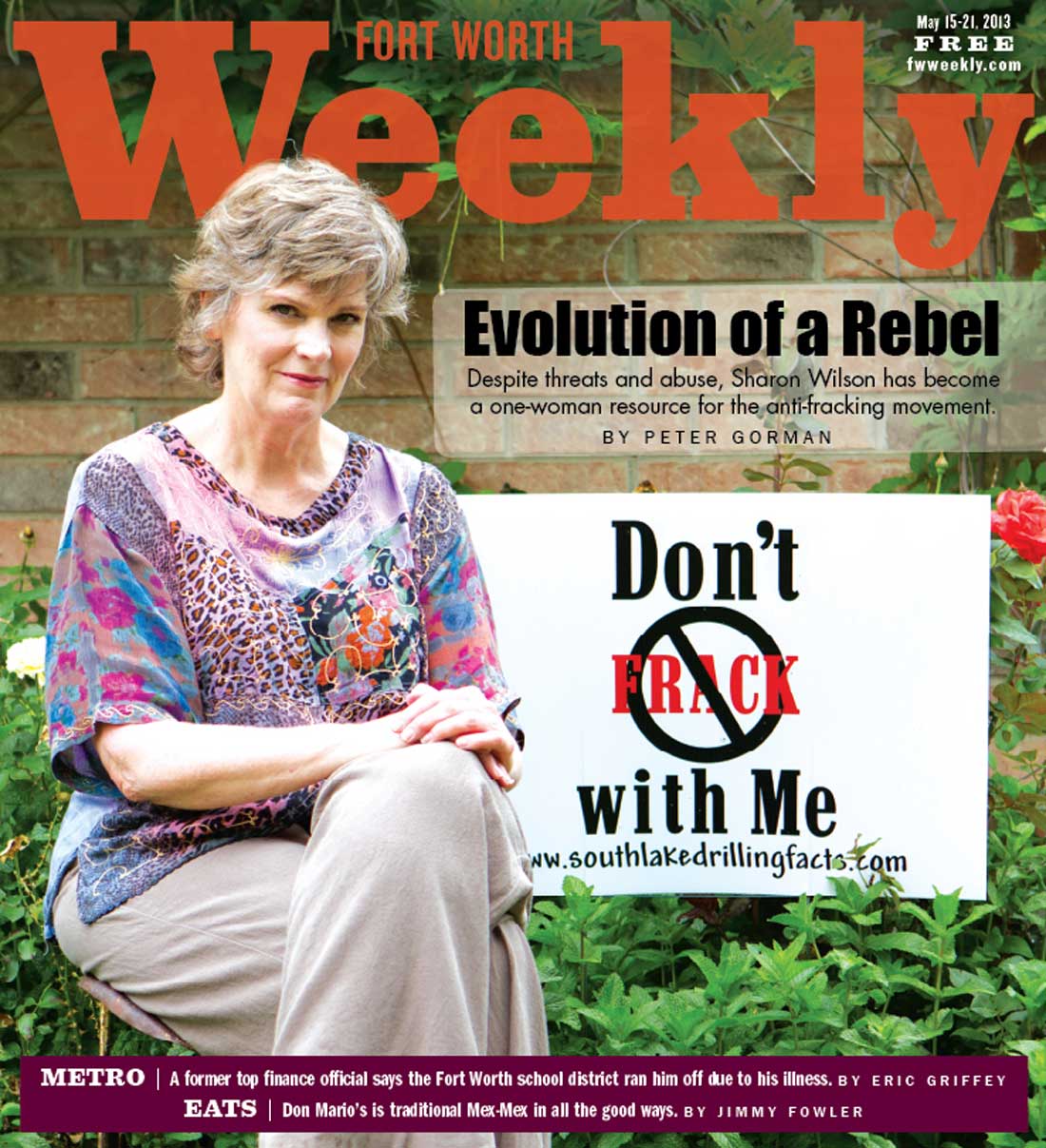 Don’t mess with Texas — TXSharon, that is, to use her online moniker. That’s the lesson the shale gas drilling companies have been learning since they got horse-riding, pickup-driving, fifth-generation Texan single mom Sharon Wilson riled up about the way they do business. She’s mad about the same litany of problems that have caused a major backlash in shale development areas all over the globe.

“Any problems the gas industry has, they brought on themselves,” she said. “They’re lousy business partners and awful neighbors.”

She’s not talking about one issue having to do with natural gas drilling, but all of them — the permanent elimination of billions of gallons of water from water tables, the release of poisonous gases into the air, the taking of land for pipelines by eminent domain, promises of “mailbox money” that never appears, and practices that put whole regions at risk of illness and explosions.

“It’s just all of it that has me angry,” she said. “Everything they do, they just do it badly, and they know it and they, the gas companies, just don’t care.” And that from someone who worked in the industry for a decade.

In the past eight years, Wilson has become one of the industry’s worst nightmares. She’s relentless, smart, and well-spoken, and she knows her stuff. She has gone from being an obscure blogger to a full-time critic of the industry, with a voice and influence that is reaching a national audience. Fort Worth’s Don Young, the godfather of the anti-shale drilling movement, calls Wilson “my hero.” Leaders of Earthworks’ Oil and Gas Accountability Project thought so highly of her that they hired her to go after the industry.

On the other side, she’s been mocked on pro-drilling gas sites, had her personal information put out on Twitter, been threatened with physical violence, taken to court, and threatened with lawsuits. But she hasn’t backed down and says she has no intention of shutting up any time soon.

And none of it had to be this way. Left alone, Wilson would have been content to finish raising her young son on the 42 acres she owned near the community of Greenwood in Wise County, tending her vegetable garden, riding and raising horses, and painting.

When she first heard about drilling in Wise County, she, like thousands of other Texans, mostly thought about the money she might make from leasing the half share of mineral rights she owned. She had no problem with the oil and gas operators. “I’d drive around and see people with new trucks and stuff and started looking into the whole mineral deal to see what money I might make. That’s what I cared about.”

When she did stumble across something negative about fracking, she didn’t want to hear it or see it. The only thing that mattered then was the money. “But every time I’d Google something about royalties, I seemed to wind up on the Earthworks website, and they kept talking about the environmental issues related to drilling.”

Still she tried to ignore it. She saw photos of waste pits on the Earthworks site and then began noticing similar pits all over Wise County. She heard about water wells going bad and worried about it. But she still didn’t think about joining the budding fight against the industry — until the day in 2005 when she turned on her water tap and nothing but air came out. When the water did begin to flow again, it was black and slimy, then gray, and finally clear again.

“I can’t prove what [made] that happen, but I know that terror of not having water when it’s your only source,” she said. Suddenly, she found herself in the fray.

“I finally started reading more about the environmental impacts of the drilling and realized how many waste and water pits were around me, and that was awful,” she recalled. “In my beautiful Greenwood, Texas, there were pits everywhere.”

She called the Texas Railroad Commission, which regulates and issues permits for oil and gas wells throughout the state, and told them about the old waste pits. “They didn’t even know where they were, much less whether they were cleaned up or not,” Wilson said.

It was the beginning of her evolution from gardener to gladiator.

Wilson, 60, was born and raised in Fort Worth. Her single mom was a secretary by day and a writer by night, so Sharon and her two siblings spent a lot of time at their grandparents’ farm in Kennedale, where she learned to rope, shoot, and ride. She started bringing home horsemanship ribbons at age 4, and won national awards all through high school. Given her druthers, she said, she would ride horses all day long.

“As soon as I was old enough to put the bridle on by myself, I’d do it and just take off. When it snowed, my grandparents would tie a shovel to the saddle and someone would get on it and ride the shovel behind the horse.”

She loved the less showy parts of farm life too, like hauling hay and working in the garden. One particularly vivid memory is of the day she launched herself onto the back of her grandparents’ bull and started to ride. “My grandmother almost had a heart attack over that,” she said.

Back in Fort Worth, she was “just a regular teen” at Arlington Heights High School. After that she took a few college classes and knocked around at a series of jobs — “nothing that was a career because I didn’t know what I really wanted to do.”

When she was 25, Wilson got married for the first time and, three years later, had the first of her two sons. “I took maybe a year off to raise Frank and then decided I needed to get back into shape, and so I started exercising and taught myself how to teach an exercise class.”

One of her exercise gigs was the noon class at the downtown Fort Worth YMCA. “People who use their lunch hour for exercise are serious about exercise,” she said, “and a lot of the people who took my class worked for the Champlin Petroleum Company.” Her marriage broke up when her son was about 2. “I realized I needed a job with more stability and some benefits. I told some of the noontime clients about my situation, and they got me a job at Champlin so that I could keep teaching the noontime classes.”

The Champlin job, which she started in late 1984, involved writing and processing contracts for foreign and domestic crude oil. She stayed at it for two years, and then got offered a job with another company.

At the new firm, “we acted as an in-house production marketing department” for smaller oil and gas companies, Wilson said. She learned how to handle data and technology. Eventually, she began to be disturbed by the information that went across her screen.

“At the end of each month we’d have to go over their statements to see what volumes of gas and oil were produced so that they could invoice for that,” she recalled. “And over the years, I began to realize, or I should say I suspected, that some of our clients — and be real clear that this was not our company, but some of our clients — well, I suspected they were shorting people on their royalties. And when I realized that, it became an issue for me to [continue to] participate in that industry. So I left it.”

Wilson was ready for change in other ways too. During her time with the second oil and gas company, she had married and divorced again, and her second son, Adam, had been born. With the money she’d saved over almost a decade, she bought 42 acres of raw land in Wise County, near Decatur — right in the middle of what would turn out to be the Barnett Shale boom.

She put a small trailer home on the property, got a septic system installed and a well drilled, and moved in in 1996. Wilson dove wholeheartedly into the country life: She cleared small trees with a handsaw. She learned to make soap and built an English garden. Homeschooling her younger son, she taught him with examples from the land, like teaching history by explaining which of the vegetables they grew came from the Old World and which from the New.

But making soap and growing veggies didn’t make ends meet. There were few long-term jobs in Decatur, so she started working as an office temp, earning enough to pay off her mortgage early.

By 2003, though, she knew she needed a full-time job with benefits. She found it in the math department at the University of North Texas, doing administrative chores like scheduling classes, keeping up with graduate student employees, putting together the departmental budget, and doing many other chores. She loved the graduate students but found the work mind-numbing.

Just after George W. Bush was elected to his second term as president, Wilson started the texassharon.com blog that she called BlueDaze. It wasn’t a particularly active blog, and it didn’t focus on gas drilling.

That was before her faucet started gushing black water and her well went temporarily dry. After that, in 2005, she began posting on dailykos.com, a left-leaning news site. By 2006 she was blogging on her own site regularly, and by 2007 its focus was nearly all gas drilling.

“One of the things that really bothered me early on, before I really knew about the dangers of gas drilling, was an interaction I had with a landman,” Wilson recalled. “He approached me and said that if I could get my neighbor, who had 250 acres, to lease his land to them, I’d get part of his royalties. To me that was stealing, so I told the landman to go and never come back.”