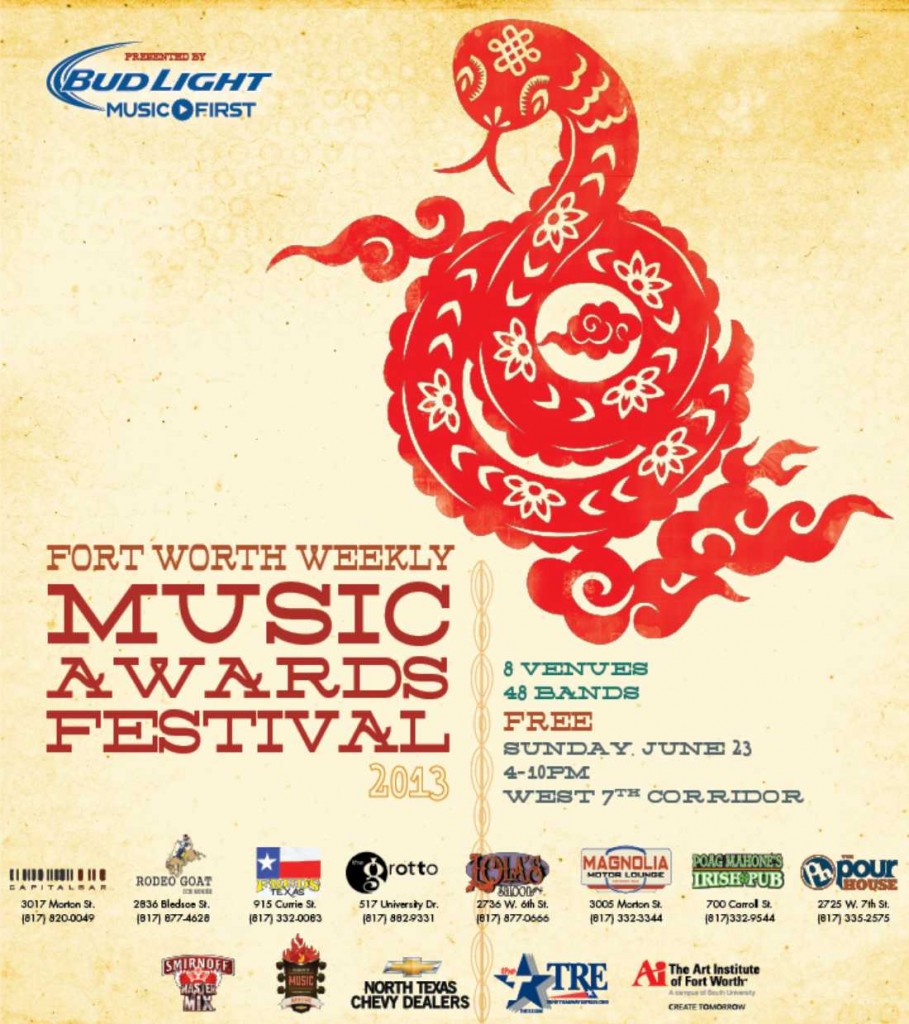 Wow. That was fast. After months of planning, Fort Worth Weekly’s 11th Annual Music Awards Festival has come and gone. And what a day. I caught a lot of great shows, starting at 4 p.m. with The Fibs at the outdoor Capital Bar. The place was just about empty, which was a shame, considering that the trio’s brand of Bauhaus-y gutter rock is pretty choice. I saw some of Cap Bar’s 5 p.m. act, a spasmodic-dancing-inspiring blast of quirky ’80s-era R&B from one man band Nathan Brown, before swinging next door to Magnolia Motor Lounge for We’reWolves’ last couple of songs. Unlike the Cap Bar –– which I heard got busy later, once the sun went down a little –– Magnolia was already nearly filled to capacity. Overflow spilled onto the small patio/smoking section and into the parking lot, which had been transformed into a tented bar area. The band’s brooding barroom rock sounded great: clean and crisp.

My next stop was Rodeo Goat, another indoor/outdoor spot that was also full. It wasn’t so bad that you had to wait more than a couple of minutes for a beer at the small bar inside, but outside, where the stage was, was standing room only. Compared to the pillowy timbre of Son of Stan’s 2012 debut album, Divorce Pop, the band’s live music was tougher and louder but no less moodily ebullient. Rocking lake-dad gear –– basically, what middle-aged men with kids wear to Jimmy Buffet concerts or, y’know, to the lake (jorts, pastels, socks) –– SoS was like an all-you-can-eat mall food-court buffet for your ears: decadent, filling, and just the right amount of kitschy. The songs are beautiful in a distressed rococo-pop kind of way –– as if served from the dark underbelly of ’80s-radio New Wave –– and when they’re performed as immaculately as they were on Sunday, they’re life-affirming. The fans ate it up.

I was able to sail back to The Pour House to catch the last few moments of Fogg’s monstrous heaviosity and all of Sonic Buffalo’s set. Though former Buffalo frontman Tac Willy is out, the band, now a trio, still kicked all kinds of ass, with bassist Zach Tucker on lead vocals. He doesn’t have Willy’s nasal, feminine voice, but he managed the high notes just fine. The main songwriting team of guitarist Christian Funes and drummer Valmir Hajro remains intact.

For the last set of the day, I strongly considered Calhoun at the Goat, Holy Moly at Capital Bar, and Quaker City Night Hawks at Magnolia, but I ended up staying Pour-House-area-local and accidentally continuing what I’ve just noticed has become an annual tradition for me: Burning Hotels at Lola’s Saloon. The set was rocking, there was a sea of sweaty people there, and co-frontman Chance Morgan danced his skinny butt off onstage. The last thing I remember was holding onto a chair on Lola’s front patio to keep the world from spinning while waiting for my cab. Time travel is a bitch, apparently.

Winners will be announced at a private event on Sunday, July 7, and on fwweekly.com on Monday, July 8.

The Ghost of Concerts Future