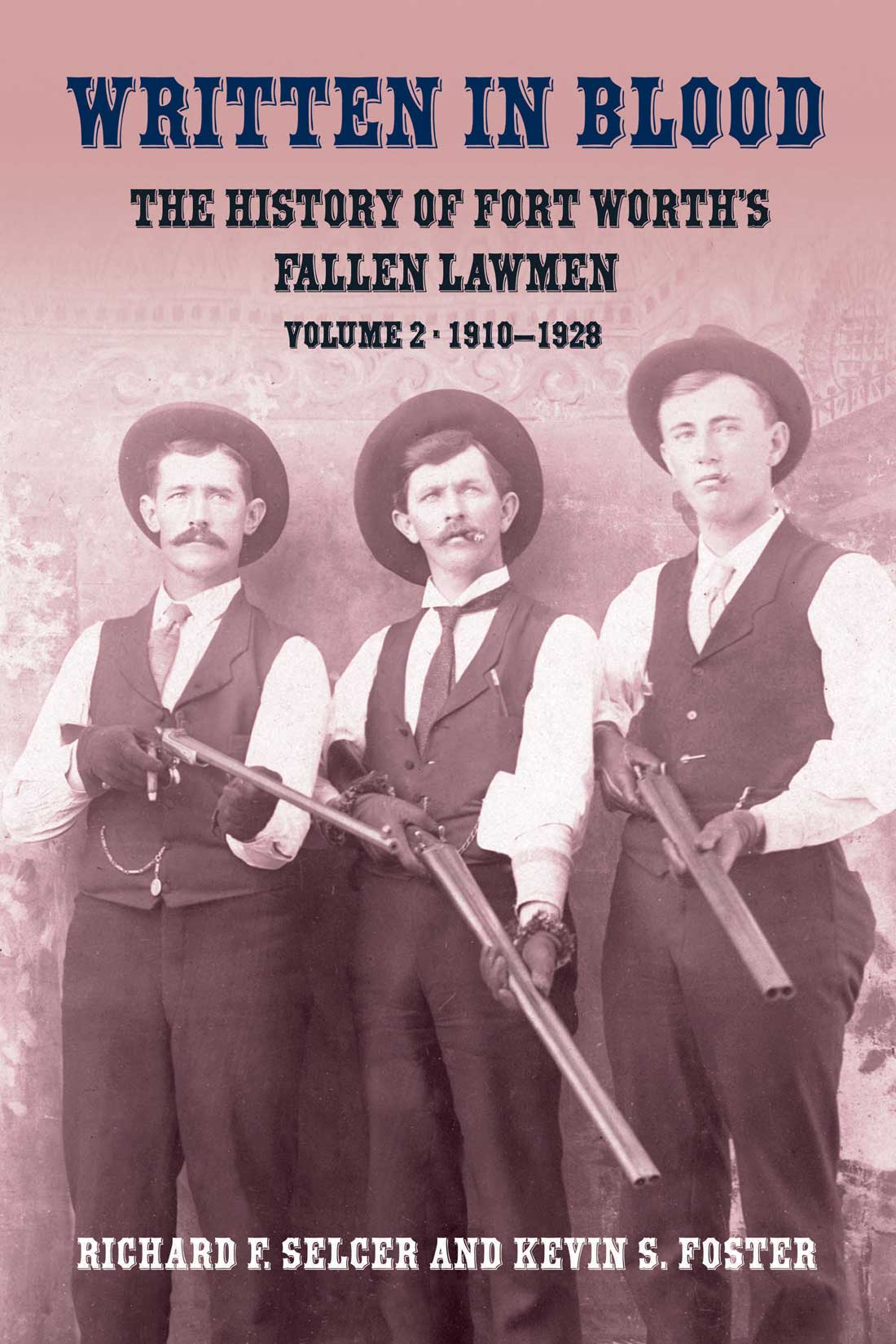 Plot twists, murder, and suspense aren’t the territory of fiction alone. Written in Blood: The History of Fort Worth’s Fallen Lawmen, Volume 2 is a vivid recounting of a pivotal Fort Worth era, told through the stories of 13 lawmen who confronted the outlaws of early Cowtown and paid for it with their lives.

Local authors Richard Selcer and Kevin Foster, cover in this second volume the years 1910 to 1928, when Fort Worth was entering the modern age. Police were trading in horses for motor vehicles and employing new crime-fighting technology — like call boxes on street corners.

Selcer and Foster bring many years of authoritative experience to the book. Selcer is a history professor at Weatherford College and the author of numerous books about Fort Worth and Texas. Foster is a retired Fort Worth police officer and a founding member of the Fort Worth Historical Association.

Their first Written in Blood volume covered lawmen’s stories beginning with the Civil War and continuing through the first decade of the 20th century. The stories in this book reflect changes in the city in general: Police officers began dying of traffic accidents and infectious disease, as well as violence.

Modern forensics was coming of age, and these advances would eventually help bring many cop killers to justice. The stories that Selcer and Foster recount testify to the mixed history of Fort Worth, one that is full of open racism, public ambivalence toward law enforcement, and occasional acts of heroism.

The death of Police Commissioner C.E. “Ed” Parsley demonstrates the blurred lines between the city’s heroes and villains. Parsley was murdered by a fellow policeman, James “Kid” Yates, who had killed several times before. Yates had managed to escape prison because, until Parsley, he had confined his victims to minorities and men whom he claimed were abusing or threatening women. (He gunned down his daughter’s lover in broad daylight.)

Because Yates was never convicted in any of the deaths, police officials felt they couldn’t fire him, but they did demote him. A disgruntled Yates got the message and turned in his resignation. But he wasn’t done yet: He went to police headquarters and demanded to see Parsley, his former boss. Once inside Parsley’s office, Yates pulled out a pistol and fired two shots at point-blank range, hitting Parsley in the head and heart. A shootout ensued in the middle of Fort Worth’s police headquarters. It ended when Officer Rufus Porter shot Yates in the head, killing him No trial necessary that time.

It was an era of new dangers and new contrasts. Officers on horseback worked alongside new motor vehicles, and British- style “bobby” helmets competed with more fashionable cowboy hats. Written in Blood does a masterful job of capturing the images of this often-forgotten time. The pieces begin with the backgrounds for both the slain officer and the killer — all the characters in these stories are given their due, even if they didn’t receive that consideration during their lifetimes.

Written in Blood seamlessly blends history and excellent prose. Each vignette is story-driven yet also makes clear the authors’ sympathies toward the underprivileged poor and minorities that swelled Fort Worth’s early ghettos. The book offers food for thought about our modern justice system and how it has improved (or not) in the century that followed. In all, the authors make history into pretty great reading.

By Richard Selcer and Kevin Foster