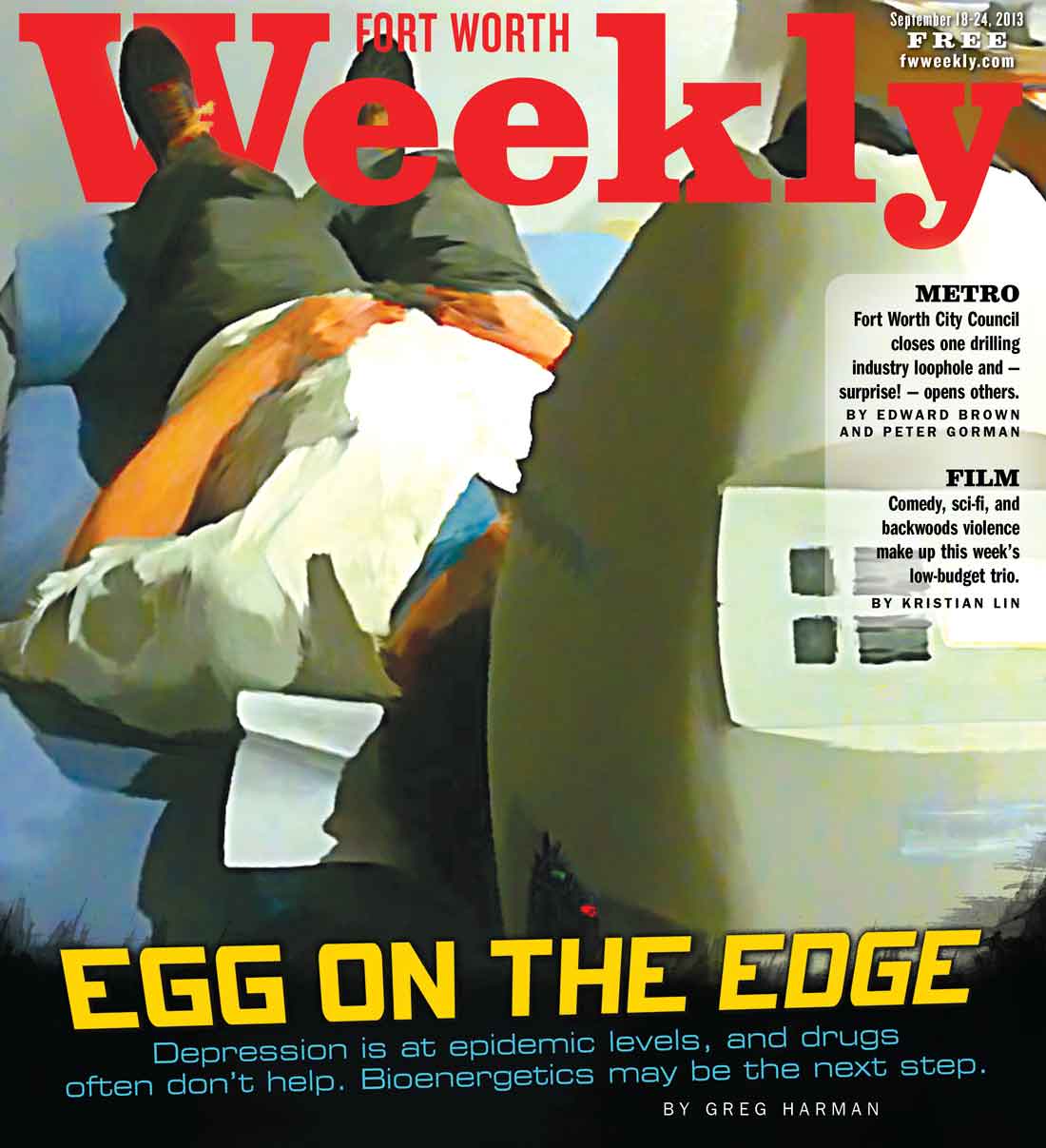 I’m on my back in a dimly lit room on the seventh floor of a Dallas research hospital. Though I can’t see it, a device roughly two feet tall resembling an oversized egg has been wheeled up behind me, its single blue claw-like appendage nestled possessively over the top of my head.

“How’s that?” the doctor asks. “OK. I’ll be back to check on you.” She walks away, and I see her long curly hair, a lab coat, calf-length boots. She passes a sign warning of strong magnetic fields.

I’m to keep my eyes closed but not fall asleep. If the egg-shaped device, an object of intense interest at 16 human clinical trials taking place around the country, is indeed functioning — meaning that I’ve been chosen for actual treatment rather than a placebo — there will be three magnets spinning inside, generating an energy field timed to oscillate across my brain’s surface at the same frequency as my own unique alpha wavelength of 10 cycles per second.

A thumb drive containing my medical information is inserted, and a man’s tinny recorded voice buzzes from within the plastic shell.

Welcome to the future of psychiatric care: low lights, an old massage table, and three spinning magnets. In a world seemingly awash in chemical solutions and all the hardship that has come to mean, prepare yourself for the rise of bioenergetic medicine.

[pullquote_right]One in 10 Americans are depressed at any given time … [/pullquote_right]Noninvasive and nonsurgical, such traditional approaches focus on the movement of energy through the body. The most popular and well known in the United States may be acupuncture. In the case of magnets, probably the most studied of the treatments now gaining favor involves magnetic waves that convert to electricity inside the body, sparking a beneficial physical response. Magnets, like  homeopathy, acupuncture, and light and sound medicine, have long been treated with distaste in Western medical circles. However, subtle mood shifts observed in depressed patients undergoing MRI (magnetic resonance imaging) procedures for other conditions launched explorations that have since boosted magnetism at least into the fringes of the mainstream.

Depression is at epidemic levels in the States. One in 10 Americans are depressed at any given time, and five percent likely meet the criteria for a major depressive disorder, according to the U.S. Centers for Disease Control. With our pharmaceutical approach bringing relief to fewer than half of those who seek treatment, according to some estimates, psychiatrists are scrambling to find new treatment options. Increasingly today, that means magnets.

In my case, in this six-week, double-blind study sponsored by device manufacturer NeoSync, neither I nor the doctor administering treatment know if the ergonomic appliance vibrating on my head is generating a potentially therapeutic magnetic field or merely rattling in place.

The hope is that the energetic boost delivered by that magnetic field will stimulate patches of my brain that have grown quiet, if not dormant, stilled by decades of drug-resistant depression. I try to imagine what these awakened neurons — transmitters that in healthy brains communicate things like happiness and pleasure — would mean, before cursing myself quietly, as depressives will do, for thinking things could be different.

So many doomsday predictions didn’t come to pass in 2012. No supervolcanoes shook the earth or blacked out the sun. No sudden magnetic pole shifts wreaked havoc on GE, Telefon, Boeing. Sadly, no interstellar conqueror came to subjugate our wayward species.

Yet when Dec. 21, 2012, dawned on Texas — the widely publicized “last” day of the Mayan calendar — I was hemmed in on all sides, a defeated, humiliated wreck resigned to spending my days on the couch, moving unsteadily from room to room in an increasingly thick, pharmaceutical-induced haze.

After decades of battling depression, I had suffered an explosion of daily panic attacks that led to a deepening despondency and brought me to the point of psychological collapse. The attacks hastened my already-planned departure from my job as editor of the San Antonio Current and forced me to grudgingly accept that, at 42, I was disabled.

It took months to get an appointment with a psychiatrist, and the array of drugs that followed –– daily doses of Prozac, lithium, Wellbutrin, Klonopin, and sleeping pills –– likely saved my life. However, my new chemistry felt like engaging the gears of a duller, more drawn-out death.

I became a strange creature: cautious, methodical, and distant. I holed up, terrified of having to explain my sorry state to anyone. I watched seasons of old TV dramas. I volunteered once a week in a down­town church basement that doubled as a homeless services center, the only place I felt a sense of belonging or acceptance.

Things could have stalled there for a very long time, as they do for many diagnosed with a mental illness: We grudgingly come to terms with newly restricted abilities punctuated by periodic breakdowns, medication tweaking, and, at least in my case, dim hopes of one day being of use to someone again.

But I didn’t stick there. A suicide scare led me to the emergency room and later into an outpatient program at a mental-health facility where doctors recommended that I have  electroconvulsive therapy (also known as electroshock), historically the treatment of last resort for depressives. However, I already had my eye on something else, a magnetic treatment I had written about two years earlier: a safer, noninvasive therapy called transcranial magnetic stimulation.