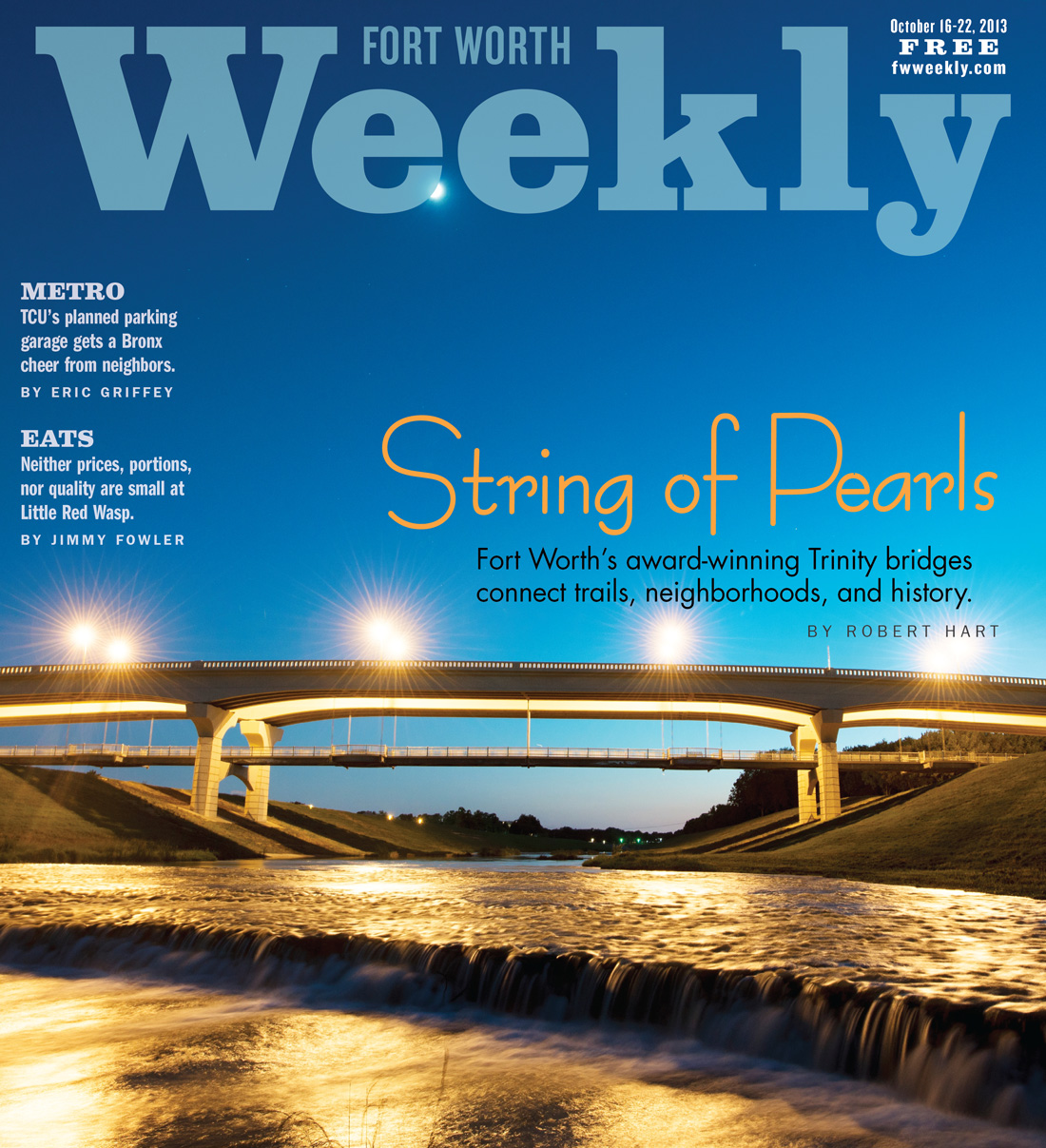 From a moving vehicle it’s difficult to appreciate the bridges that span Fort Worth’s two forks of the Trinity River. Railings fly by, obscuring the river completely or chopping the view into slices like a flipbook. Is the river up and running fast, or is down to puddles and dregs? Are there cyclists, hikers, kayakers, rowing teams, anglers? At that speed and height, who knows or cares?

The real power, utility, and grace of the spans are revealed underneath. Old and new, on the Clear or the West Fork, the bridges here are best experienced from the 40 miles of biking, hiking and equestrian paths that make up the Trinity Trail system.

From that perspective one sees the shapes and mechanics that distinguish a truss bridge from a concrete reinforced arch. From below travelers can appreciate the distances and heights that the bridges span, get an inkling of the river’s power and perhaps its history, as where the river flows –– meekly enough these days –– at the foot of the Tarrant County courthouse, not far from where Indians once camped and the city began. Or below Seventh Street, where deadly floods once thundered through, memorialized for decades by a high-water mark on the walls of the landmark department store that now houses Montgomery Plaza.

Fort Worth completed three bridges in the past 13 months at a total price of $39 million, two of them award-winners whose designs make them unique on this continent, if not in the world. Meanwhile, downstream and about 35 miles east, where prices and pretense tend to run higher, Dallas has just approved its second Santiago Calatrava bridge, budgeted at $102 million –– on a part of the river that has minimal public access and few amenities. Ask your Dallas friends when they last strolled, cycled, or jogged along the Trinity in their town.

But Fort Worth’s auspicious bridge building didn’t begin in this century. Take another look at the structure that, heading south on Main Street, carries cars to the top of the bluff where downtown begins.

The Main Street Viaduct or Paddock Viaduct, named for newspaper editor and railroad executive Buckley Burton Paddock, was completed in 1914 at a cost of $1 million. Like its newer upstream neighbors, it was the first of its kind. Listed on the National Register of Historic Places, the Paddock Viaduct, according to the Texas State Historical Association, was the first concrete arch bridge in the nation to use self-supporting reinforcing steel.

A few miles upstream on the Clear Fork, a new bridge connecting Hulen and Bryant Irvin streets includes a pedestrian version that links the Trinity Trail portions on both banks. It spans one of the cleanest, prettiest stretches of the river, where it runs over a limestone riverbed that reminds us why it’s named the Clear Fork. The bridge, which opened Sept. 19, is a work of art itself but also includes murals at the pedestrian level and benches for walkers and bikers to rest and admire the river and the bridge.

Downstream, just before the river flows under Rosedale Street and I-30, is a much humbler bridge that’s part of the childhood memories of a couple of generations of local residents. The Forest Park Miniature Railroad truss bridge, built in 1959, skirts the bank of the Clear Fork and spans an oxbow. It’s the first bridge on the railway’s 5-mile journey through Trinity Park.

Less than a mile to the north, the graceful curve of the 13-month-old Phyllis J. Tilley Bridge is the first long bridge in North America combining a steel arch and stress “ribbon.” In April the Tilley bridge received the Eminent Conceptor Award, the highest honor for engineering excellence bestowed by the Texas branch of the American Council of Engineering Companies. The bridge also received a gold medal in the group’s structural systems category.

After dark, LED lights illuminate the underside of the bridge casting a soothing blue glow across the understory and the water surface. It’s an eye-pleaser both day and night.

Another few hundred yards down-stream, the newly opened $23 million Seventh Street Bridge is the world’s first precast-concrete network arch bridge. It’s noteworthy both for being Texas-designed and completed on budget and a month early.

The two forks join just before the Paddock Viaduct and continue as the West Fork, running below the Samuels Avenue bluff, which turns the river north before it turns east and south again. Where the Trinity roughly parallels I-35 east of downtown, a workaday bridge nonetheless provides another broad river vista, whether viewed from the freeway, the trails, or the river surface itself. The Chicago, Rock Island and Gulf Railway bridge, built in 1923, is used by the Trinity Railway Express commuter train. On this stretch of river, members of the Fort Worth Rowing Club turn their sculls around to row back downstream to their boathouse at the Beach Street bridge.

The TRE ferries commuters back and forth between Fort Worth and Dallas, like the old Interurban Railway did before I-30 was built or the Fort Worth section of the Trinity was tamed with dams. Dallasites who bring their bicycles westward have an opportunity to experience the Trinity River in Fort Worth style.

Veteran photojournalist Robert Hart can be reached at robert@roberthart.com.