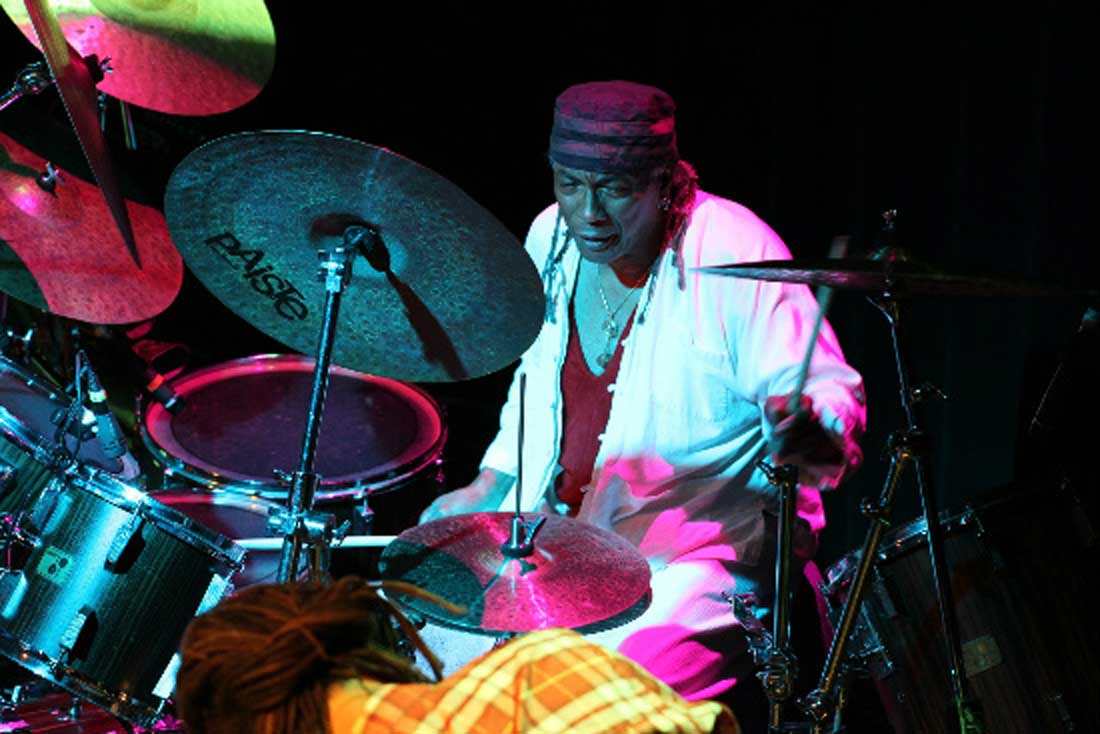 Jackson made his indelible imprint on jazz in the 1960s and ’70s, playing drums with free jazz pioneers Albert Ayler, Fort Worth native Ornette Coleman, and Cecil Taylor –– Jackson was the only musician to have played with all three innovators. From 1979 on, he led The Decoding Society, a fiery electric ensemble that played his own compositions, synthesizing elements of jazz, rock, funk, and indigenous sounds from Africa and Asia, where he traveled in the 1980s.

While his level of public activity diminished after Jackson moved back to Fort Worth, his creativity did not. He continued composing and working on his conception of the drums until the very end, writing music on a piano he found at the hospital in New York where he went for treatment in August 2012. He played his last gig in July of that year at the Kessler Theater in Oak Cliff.

While Jackson journeyed around the world, continuing to perform in Europe into the current decade, his highly individuated music was deeply rooted in the experience of his formative years in Fort Worth: the marching cadences of the I.M. Terrell High School band and the symphonic music of the school orchestra, both of which he played for; the gutbucket blues he heard in the nightclubs where he serviced jukeboxes for his father’s record store; the bebop he heard at after-hours jam sessions in Greenway Park and later performed in the Jacksboro Highway joints where he had his first professional engagements.

Jackson was far from a conventional jazz drummer. He eschewed the signature sock cymbal-driven sound of bebop in favor of an approach that constructed rhythm from the kick drum on up. The thunder of his toms was as distinctive a signature as a singer’s voice. Onstage, he had the mien of an African king. He rejected the notion that jazz is primarily repertory music, performed by interchangeable groups of players from the pages of The Real Book, what he derisively referred to as “ching-ching-a-ching, ‘Days of Wine and Roses’ gigs.”

As a bandleader, he resisted the urge to dominate with percussive pyrotechnics. Instead, he served as a mentor and preceptor to younger musicians like The Decoding Society’s co-founding members: guitarist Vernon Reid and bassist Melvin Gibbs, both of whom went on to achieve success in the realms of rock, funk, and punk and cite Jackson as a musical father figure. At the Kessler, Jackson generously ceded two songs in the Decoding Society’s set to Dallas guitarist Gregg Prickett and another to Gibbs.

It was a source of frustration to Jackson that no one in his hometown saw fit to pay him an amount that would allow him to adequately compensate musicians for rehearsing his music. Similarly frustrating was the disappearance of his albums from record company catalogs –– or the disappearance of the labels themselves, like the Fort Worth-based imprint of the sadly departed Caravan of Dreams venue (where Jackson performed frequently during its 1980s heyday).

Jackson had released no new music since a nine-album blitz on the New York-based Knitting Factory label in 2000. But at the time of his death, he was working with local musician/producers Curtis Heath and Britt Robisheaux on a digital release of some previously unheard recordings of his music, including a board recording of the Kessler Theater show and a triptych of versions of a Jackson composition: one by a trio with Reid and Gibbs, one with an orchestra, and another on solo piano.

A Jackson fan since I heard him on Coleman’s Dancing In Your Head in 1976, I was privileged to call Shannon a friend over the last decade. I met him while writing a cover story about him for this publication in 2002. Over the years, I saw his bitterness at the vagaries of the music business subside and came to know him as a perpetually searching intellect who read voraciously on a variety of topics –– by his own account, he was an “information junkie.” (On his 1985 album Pulse, he declaimed Shakespeare and Poe and played solo drums behind others’ spoken word performances.) He was a very young septuagenarian, playing pickup basketball and learning how to ride a motorcycle at age 70.

His home was a sanctuary filled with books, music, and art objects –– paintings, sculptures, masks, drums, his own stage costumes –– and adorned with concert posters, photographs, and snippets of musical notation he had inked directly on the wall. He ate well from his own organic garden. For someone so imposing behind the drums, he was capable, one-on-one, of puckish humor, with a glint of mischief in his eyes.

I went to visit him last week with two other friends, after he came home and was under hospice care. I had hoped to bring him lunch this week, but we ran out of time. In correspondence, he always signed off, “In Rhythm.” In person or on the phone, his parting line was always, “Easy.” And so …

Easy, Shannon. Go be part of the rhythm of the cosmos for a while. You’ll surely be missed here