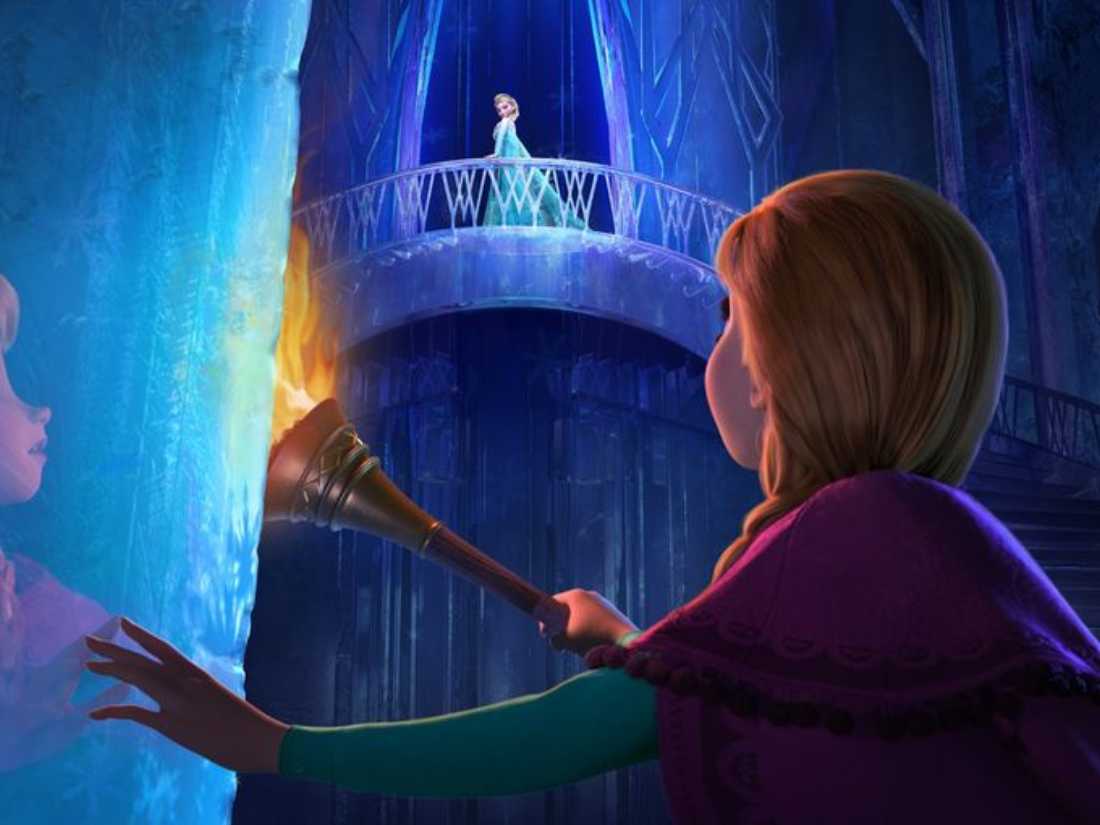 Last August we had The Snow Queen, a Russian film based on Hans Christian Andersen’s fable. Frozen is based on the same story, but it’s both the best animated movie of the year and the best musical.

The heroine is Anna (voiced by Kristen Bell), the orphaned younger daughter of the monarchs of a fictitious Nordic kingdom. She has been carefully kept from any knowledge that her reclusive older sister Elsa (voiced by Idina Menzel) can create ice and snow with her bare hands. When Elsa comes out of hiding at age 18 to assume the throne, her emotions make her power go haywire, and she flees into the wilderness while the kingdom is plunged into an eternal winter. She’s followed closely by Anna, who’s determined to talk her sister down and put nature back to rights.

The songwriting duties here are handled by the team of Kristen Anderson-Lopez and Robert Lopez, who previously wrote the songs on Winnie the Pooh. (Lopez also worked on Broadway’s Avenue Q and The Book of Mormon.) The new talent pays off handsomely, as the married duo turn out a funny song called “In Summer,” sung by a snowman named Olaf (voiced by Josh Gad) who’s been brought to life and loves the idea of hot weather. They also give an emotional edge to the opening song “Do You Want to Build a Snowman?”, sung by progressively older versions of Anna.

The cast full of Broadway veterans helps, but the show fully belongs to Bell. If you saw her performances in Forgetting Sarah Marshall or TV’s (and soon to be film’s) Veronica Mars, you might not think that she had “Disney princess” in her repertoire, but she makes a good one. This assured comic actress finds the humor in Anna’s social awkwardness, but none of her film roles to date have showcased her musical talents like this one. If you didn’t know that she could sing, you’ll know it when she unleashes her sweet but powerful soprano on the ballad “For the First Time in Forever,” singing as if her life depended on it.

Co-directors Chris Buck and Jennifer Lee do more creative things with the ice and snow in this story than were done in all four Ice Age movies, but the really interesting developments come in Lee’s script. Like many other Disney princesses, Anna sings about finding that one special man, but here the filmmakers know that she’s being a silly, naïve girl. Disney’s musicals are notoriously retrograde about their female characters, but along with Tangled, this film advances several steps forward in depicting girls with more complex motives. In the climax, Anna runs away from the man she loves in a last-ditch attempt to save her sister’s life, and that’s when you know that we’re in uncharted territory for Disney. More than anything, that makes Frozen into a fresh piece of holiday fare.