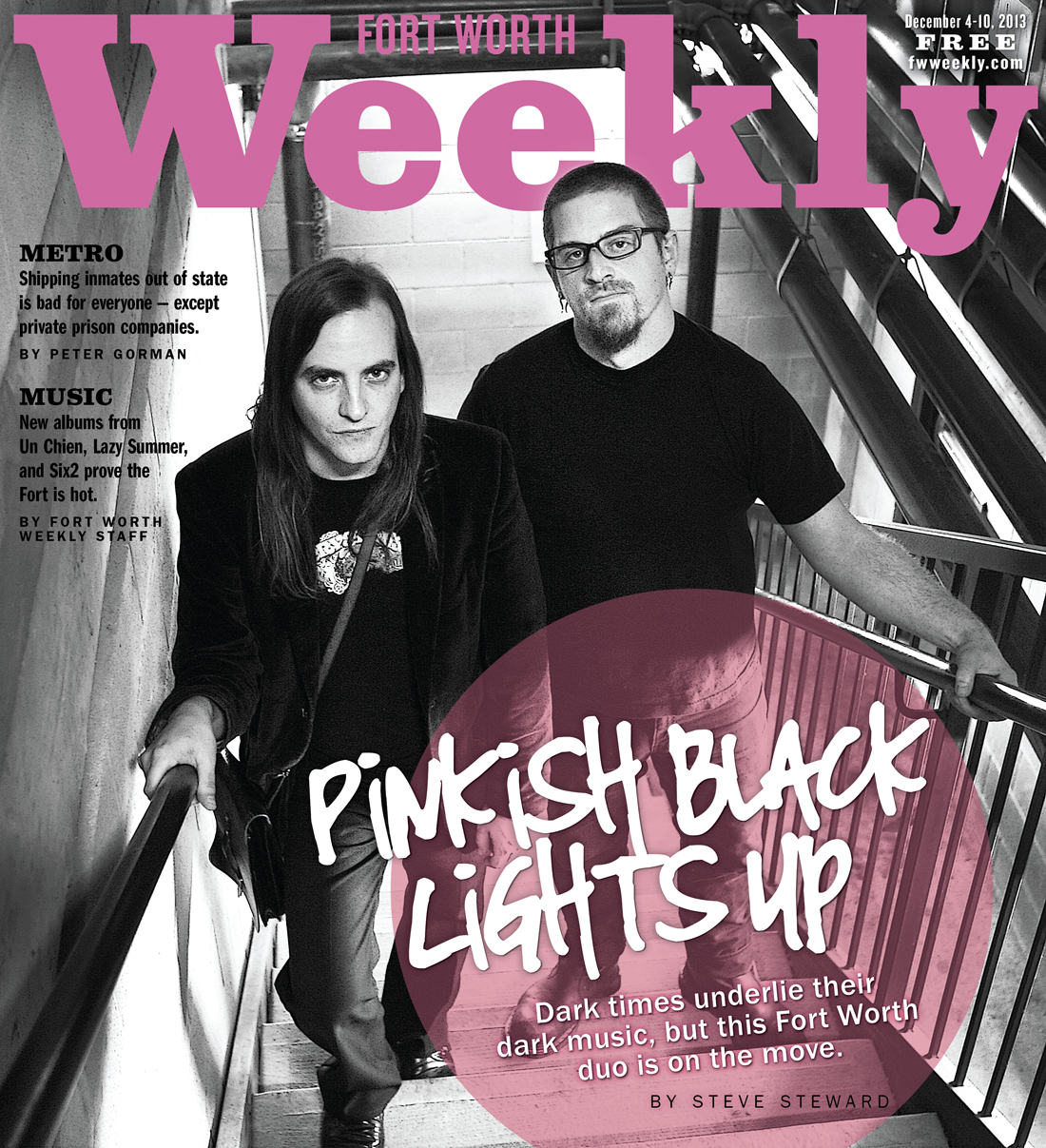 Even the family tree of band names reads like the cast of some creation myth culled from the collective human consciousness: Ohm was the first, from which came Yeti, who begat The Great Tyrant, from whose ashes arose Pinkish Black. But then, in the annals of North Texas music, these bands are kind of legendary.

And now Pinkish Black, the duo of  drummer Jon Teague and vocalist/keyboardist Daron Beck, is on the brink of breaking nationally, perhaps even worldwide. It’s no small feat for a three-year-old Fort Worth band that hides its hooks beneath song titles like “Bodies in Tow” and “Tell Her I’m Dead.” Their path has been a peculiar one, fraught with trials and sorrow and begun with a mutual affinity for The Muppets.

For Teague and Beck, making dark music has been therapy for a string of tragedies over the last decade that have taken the lives of bandmates and family members. Their music, in turn, carries on the inventive spirit — if not the exact sound — of former bandmates Chris Forrest, Doug Ferguson, and Tommy Atkins, lost respectively to a brain tumor, undiagnosed diabetes, and suicide. Within that lineage is a progression of bands known for expanding the boundaries of musical structure, finding artistic truth by enveloping audiences in cocoons of sonic exploration woven from weird meters and a shifting palette of aural textures lurking between inner space and massive, punishing volume.

With a record contract in hand and a tour with a nationally popular act behind them, Beck and Teague still struggle with demons that have continued to buffet their lives, even as the future of their band continues to brighten. The ghosts of Ferguson and Atkins in particular are never far away, but the duo’s grief has evolved into a creative force.

The lineage, in a way, begins with Doug Ferguson. Across a dozen recordings with seven different groups and a museum’s worth of vintage keyboards, Ferguson’s life was ensconced in music. Even before Ohm, he was considered one of the progenitors of an early-’90s movement loosely referred to as the Denton space-rock scene, a group of bands with names like Mazinga Phaser and Thorazine Dreams and an annual showcase called the Melodica Festival. This unofficial association oozed out of the confines of Denton and onto the Fort’s stages, most notably at The Wreck Room, where Ferguson’s improvisational outfit Ohm spent a month-long residency.

Ferguson formed Ohm with multi-instrumentalist Forest Ward, clarinet player Chris Forrest, and Nathan Brown on bass. With Brown’s low end rumbling behind the outré explorations of Ferguson’s synths, Ward’s sax, and Forrest’s clarinet, Ohm was a free-form experiment in psychedelic music, in which movements and themes bled into one another like shadows, emphasizing atmosphere over structure. The band had a comparatively small fan base, but Ferguson’s experimental genius and capacity for engendering the same in others are captured in a pair of Ohm studio albums — 1997’s O2 and 1999’s Voices — as well as in an assortment of rehearsal recordings and some video and audio recordings of four Sunday night shows at The Wreck Room in 2001.

These last could be a soundtrack to some early ’80s sci-fi horror movie, with Ferguson’s keyboards bleeping and sighing over the spectral noises made by everyone else. Sadly, the last of Ohm’s Wreck Room shows would be its final performance anywhere. Life and other musical projects would get in the way of booking shows, and Forrest would be diagnosed with a brain tumor. He died in 2004.

Prior to Forrest’s death, Ferguson had introduced a trio of Fort Worth punks to the intricate weirdness of European prog bands like France’s Magma and the proto-Krautrock of Amon Düül II. Ferguson had worked at a sandwich shop near TCU called Shawn’s Subs with a drummer named Jon Teague. In 1998, along with Teague’s friend Tommy Atkins on bass and guitarist Eric Harris, they formed Yeti (after Amon Düül II’s 1970 album), a jazzy, progressive rock band as heavy and mysterious as its name. Powered by Teague’s complicated time signatures, Atkins’ seismic low end, and the effects-shrouded fretwork of Harris, the band matched Ferguson’s experimental leanings with inventive rhythmic skeletons.

“Doug was kind of a weirdo and a little bit older than those other guys,” said longtime scene chronicler Ken Shimamoto. “He educated them in a lot of European prog stuff from the ’70s.”

Brown was out of town when Yeti got together but was impressed by what he saw when he moved back. “It was really great seeing these guys go after music influenced by the darker side of the Belgian scene,” he said.

Ohm’s DNA was visible in the similarly ethereal sonics of Yeti’s early material, but the presence of the three punk and metal fans in the band would give the music a dark and massive element. If Ohm was a nebula, Yeti was the event horizon of a black hole.

The band recorded two albums, the first, Things to Come, with Ferguson, the second without him. In February 2002, Ferguson died suddenly from a diabetic condition he didn’t even know he had until it was too late. Though devastated, Teague, Atkins, and Harris continued on as a three-piece, recording the tellingly named Volume, Obliteration, Transcendence, a collection of four songs as intimidating as they are long. (The lead track, “Cusp of Something You Don’t Understand” runs just shy of 12 minutes.) The record wasn’t released until after the band called it quits in 2004.

“The second Yeti album was essentially the band blowing out all the feelings they had from Doug’s death,” Shimamoto said. “The CD was held up by artwork, but in the meantime they’d fallen apart.”

Teague said Yeti broke up because of the usual suspects. “It was pretty much a combo of kids, tour stress, drugs … . I think we were just worn out.” The band played its final show in April 2005.

“It was one big long song,”  Shimamoto recalled. “It sounded to me like some great beast’s heart slowing down. Eric pretty much played the same note over and over; Tommy spent most of the show with his hands behind his back … . I realized halfway through that I was watching a band dying onstage.”

Yeti still had seeds to spread, however. It would catalyze a future musical partnership by introducing Jon Teague to Daron Beck.

Where Dogs Go before They Go to Heaven