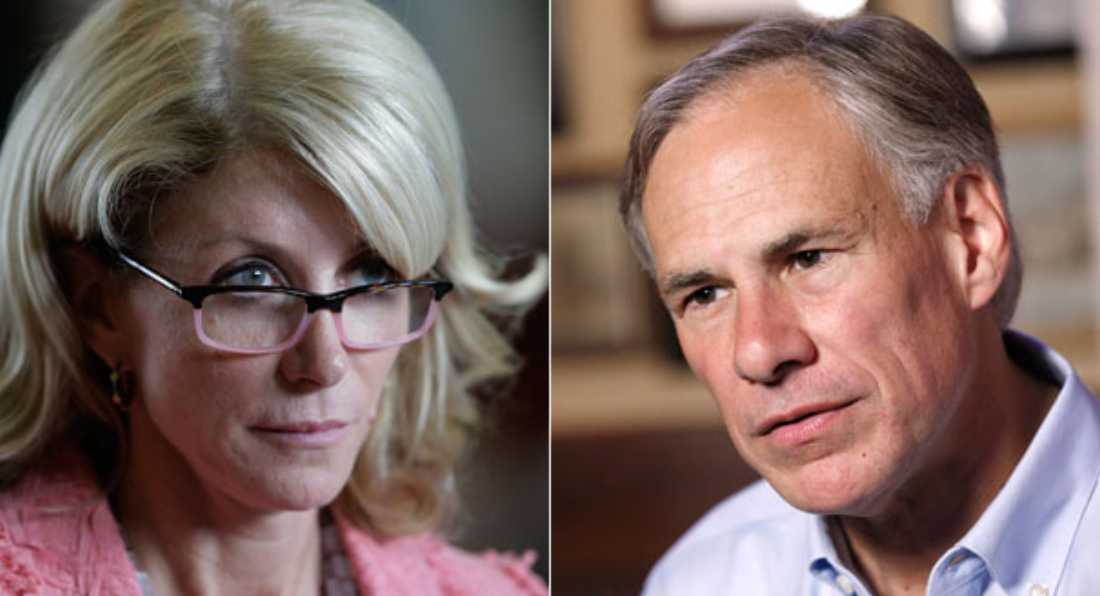 The presumption that the 2014 governor’s race is between Republican Atty. Gen. Greg Abbott and Democratic State Sen. Wendy Davis is just too tough to overcome.

Pauken, chair of the Texas Republican Party in the mid-1990s, said early on that any chance of beating Abbott for the GOP nomination would require raising at least $2 million by that deadline. With the March 4 primary less than three months away, “Unfortunately we are nowhere near where we need to be financially and organizationally to win this race,” Pauken said. “I can no longer in good conscience ask friends and fellow conservatives to continue to help me when there appears to be no realistic path to victory.

“Greg Abbott has a $25 million war chest, and the media depicts this as a Greg Abbott v. Wendy Davis race,” Pauken said.

Fort Worth’s Davis, meanwhile, continues to pick at Abbott, as she has since she decided to give up her Texas Senate seat to challenge his presumed cakewalk to the governor’s mansion.

Abbott sort of teed himself up for Davis by responding to her criticism of him for visiting the Plano Independent School District as the kickoff for a series of “education round tables” he is holding around the state.

Davis criticized Abbott for defending the Republican-dominated Texas Legislature’s cut of $5.4 billion in public school funding in 2011. She had filibustered against those cuts and briefly killed them at the end of the 2011 regular legislative session. But they were passed in a special session called by Republican Gov. Rick Perry.

In a press release in advance of Abbott’s Plano visit on Dec. 3, Davis’ campaign said, “It’s unlikely that he will apologize to students for defending school budget cuts and fighting against that school district in court.” Plano was one of about 600 school districts — about two-thirds of those in the state — that challenged the cuts as unconstitutional.

Noting that the cuts cost the Plano district 190 teachers, among 11,000 teachers statewide, Davis said Abbott “has put Texas’ future at risk, and visiting a school is not going to make up for the fact that he fought against Texas students in the courtroom.”

Abbott, at the Plano event, asked, “If she were governor, would she ask her attorney general not to defend the laws passed by the legislature?”

That’s easy, Davis responded, “As governor, I would have vetoed the bill.”

Concerning the school spending cuts, State District Judge John Dietz of Austin early this year agreed with the school districts that the cuts violated the state constitution’s requirement for adequate education funding. After that, the legislature restored some of the funding that was cut in 2011. But the protesting districts say it’s still not enough. Dietz has set a court session early next year to consider that question.

Davis also charged that Abbott dropped the ball on oversight of the Cancer Prevention and Research Institute of Texas.

Jerald Cobbs, a former top executive at CPRIT, was indicted recently by a Travis County grand jury on felony charges connected to the 2010 awarding of an $11 million grant from the agency to Peloton Therapeutics without the required scientific and business review.

Cobbs was the chief commercialization officer at CPRIT, dealing with for-profit companies trying to find more ways to battle and treat cancer. He resigned in November 2012.

The attorney general sits on the agency’s oversight board, but Abbott never attended a meeting.

Davis said in a statement that Abbott “has betrayed Texas taxpayers by failing to show up to even one CPRIT oversight board meeting. Greg Abbott has yet to fully explain why he failed in his basic oversight responsibilities to Texas taxpayers.”