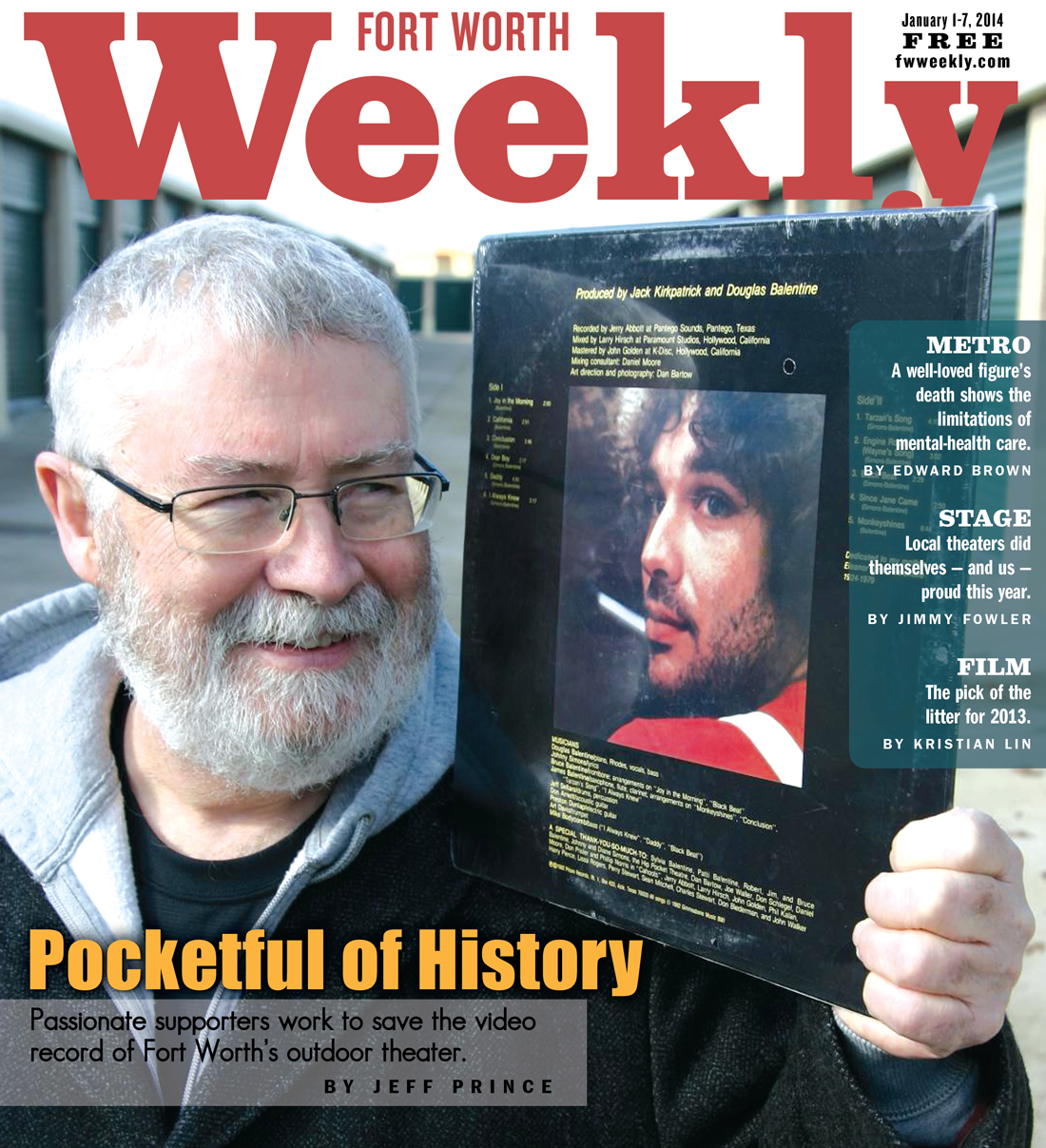 The storage unit door rolled upward with a screech to reveal stacks of cardboard boxes and plastic bins filled with hundreds of videos. Most were VHS or semi-professional industrial-grade videos, although reels and tapes of various formats were mixed in among the mountain of footage documenting decades of magic at the Hip Pocket Theatre.

Three of the theater’s prominent figures — an actor, a musician, and the board president — stared in silence for a moment. Opening that door was a tiny step in the marathon archival project that will consume them for the next year. A Kickstarter campaign raised $28,000 to recover these videos, organize and log them onto a computer spreadsheet, digitize them, create a website, and archive the Hip Pocket’s early years, including the amazing original works of composers Doug Balentine and Johnny Simons.

It won’t be easy or cheap. Dwight Welsh, the videographer who shot the tapes stacked in this Fort Worth storage unit, documented many subjects over the years as a freelance cameraman. He died in a car wreck about 10 years ago; a couple of years ago, his heirs offered Welsh’s entire collection of videos to the theater. The Hip Pocket tapes are mixed willy-nilly with the others, the whole pile screaming out for some sort of organization.

“We have to sort through all this material and find the things that belong to us and start getting them recovered,” theater board president Bob Bourdage said.

Welsh labeled some tapes but not all. Some he re-used, recording over the original footage –– but neglecting to revise the labels. Someone will have to watch all these tapes to determine which ones contain Hip Pocket footage to salvage.

“I am so eager to get in and actually see these,” said frequent Hip Pocket actor Peggy Bott Kirby. “I can’t wait to hear the incredible music on them.”

Balentine, Simons, and Simons’ wife Diane created the independent-minded and occasionally avant-garde outdoor theater in 1976. More than 250 productions have been staged since then, with some of the best being buoyed by the talents of the Balentine and Simons songwriting duo. Simons was the word man, penning scripts and lyrics, and Balentine created the music. Simons directed and choreographed the plays, Balentine recruited and rehearsed the musicians and singers. The duo worked closely for 30 years before Balentine left Fort Worth to run other theaters.

Hip Pocket is a low-budget operation without resources to archive its own history. Many different people taped shows over the years and gave the tapes to Simons. He stored them at his house until a fire about 20 years ago destroyed or damaged many of them. He gave the surviving tapes to Doug Balentine’s brother, Bruce, for safekeeping. Bruce operated a home recording studio in Denton and was involved in many of those Hip Pocket productions as a musician and sound engineer.

Bruce stored Simons’ collection of tapes in Denton for years, along with many of his own. But he recently moved to Switzerland for a career change, and he put that hodgepodge audio and video collection into a temperature-controlled storage unit. So there were two large collections of video footage being stored in separate places.

The Hip Pocket supporters have long been aware of both collections, but nobody quite knew what to do with them. Bruce realized that videos stored in outdated formats and tucked away in boxes are typically doomed to neglect, deterioration, and ruin.

Once duplications are done and the archive is created, Hip Pocket hopes to place the videotapes with a library or university. The Fort Worth Library has expressed interest in them, Bourdage said, and he plans to also talk with Johnny Simons’ alma mater, Texas Christian University, about possibly keeping the collection in its library.

Bourdage, who in recent years has been videotaping each season’s shows in digital format, wants to begin interviewing old cast and crewmembers about the newly recovered materials. Those interviews will become part of the archives as well, he said.

“Every one of these plays had various back stories,” he said.

The film isn’t the only thing aging. Simons is in his 70s and dealing with health issues. He and Diane aren’t in a financial position to retire anytime soon, he said, and he expects he’ll continue churning out plays until he drops dead.

After that, who knows? Maybe his daughter Lake, who currently works in theater in New York, will return to Fort Worth and assume the mantle. Maybe not. The Hip Pocket might begin and end with its one and only artistic director.

Simons is masterful at imagining and producing unique plays, but he isn’t geared for organizing and digitizing decades of tapes. He shuns computers and doesn’t even own a cell phone. And so the two storage units filled with video treasure might have gathered dust for many more years if not for a tragic night in 2008 in the Davis Mountains of West Texas.

Doug Balentine was camping solo and sleeping in his van. He’d been feeling low. Sensitive by nature, he tended to stew on things. And he was drinking heavily that night. At some point he put a small grill filled with hot coals inside the van. It was December and chilly, so he might have been seeking warmth. Or maybe he was seeking death. He’d intimated to a few friends, including Simons, that one day he might end his own life, go out on his own terms. Accident or not, Balentine was asphyxiated.

Most of his friends doubt it was an accident.

“He didn’t have the opportunity to be in contact with other people who could have shown him there were other alternatives,” Bruce Balentine said. “It seemed to him that it was time to go. Doug always had a flair for the drama. It was his decision.”

The death crushed Bruce, who’d spent his whole life playing alongside his younger brother as a musician, composer, recording engineer, and occasional actor. His sorrows didn’t stop there. Bruce soon lost his father and wife as well. The losses spurred a need in Bruce to cling to memories of his loved ones. He instigated the Kickstarter project several months ago as a way to preserve and share some of his brother’s most creative years.

“It’s possible that there is a need for closure,” Bruce said. “Doug left a musical legacy that is worth preserving and that other people need to hear. And perhaps it’s a way of keeping him alive for all the friends and colleagues who loved him so much.”