The Van Cliburn Foundation took first dibs at inaugurating the handsome recital auditorium in the Kimbell Art Museum’s new Renzo Piano Pavilion last week, and most of it was memorable listening.

Russian pianist Olga Kern, co-winner of the 2001 Van Cliburn International Piano Competition, was brought in to do the honors. The tall blonde beauty looked like a million dollars coming onstage in a strapless, form-fitting blue silk gown, drawing audible ooooohs from the crowd before the welcoming applause began.

However, her opening selection, Robert Schumann’s Carnaval, was a questionable choice, especially for a young musician. One of the toughest pieces in the piano repertory, it’s an assemblage of brief sketches expressing the composer’s impressions of people, places, and things, jumping from one musical thought to the other in a mysterious, alphabet-based tonal scheme. Kern didn’t dig into it deeply enough to be convincing, whizzing through some of the fast sections and seeming reluctant to linger over the introspective moments. The total effect was disappointing. She may want to retire Carnaval for a bit and come back to it later.

More successful was her next piece, the Chopin Second Sonata, particularly the third movement’s well-known Funeral March. Both the steady crescendo that builds as the cortège comes nearer and the plaintive little melody in the middle were filled with sorrow and grief. The race through the last movement was amazingly nimble and accurate.

After intermission, things continued to improve. Coming out in a flame-red sheath, she played a thoughtfully planned Rachmaninoff sequence that took up the entire second half of the concert. Kern didn’t seem to be holding back anymore, not sonically — she can rattle the shingles off any roof — but in terms of letting herself go with the music.

Mirroring the opening Schumann piece, she combined three of the Russian composer’s études-tableaux and nine preludes, creating a flowing series of contrasts. Kern found their personalities, which she’d had trouble doing with the Schumann piece, and reveled in bringing out the colors and technical challenges each presented: the smooth legato of Op. 33 No. 7, the impish fun of Op.33 No. 5, and the regal power of the ubiquitous C-sharp minor prelude, probably the best known of the lot. Relaxed, totally personable, playing straight from the heart, the pianist was in her element.

She continued the Rachmaninoff showcase with three encores: a barcarolle, a furiously paced transcription of Mussorgsky’s Russian dance Gopak, and another transcription of Rimsky-Korsakov’s almost impossible “Flight of the Bumble Bee.” All told, the second half was exciting.

Kern also got to choose her instrument from New York’s Steinway Hall. The handsome grand piano will remain in the pavilion as the official house piano for recitals and chamber concerts. It’s a little bright sounding on top but amazingly colorful from top to bottom. Kern gave it a thorough workout.

The 298-seat auditorium is a gem. The space is roughly square-shaped, and the stage runs the width of the room. Instead of the usual stone or wooden wall upstage, there are two stories of thick glass panels that have been treated to soften sound as it hits the glass and can be adjusted to direct sound for different occasions. During this concert they also reflected four ascending images of Kern as she performed, which wasn’t as intrusive as it may seem. In fact, it relieved some of the bareness of the view. A few feet behind the glass is a concrete wall that protects the glass and blocks outside distractions. The space in between allows natural light to filter in.

Glass is a major element in architect Renzo Piano’s design. Approaching the pavilion from outside, you’re faced with a wall of glass doors. In the vast lobby area, the tops of the auditorium’s red upholstered seats can be seen in the distance behind more glass panels. Getting closer, you see it’s really the back of the balcony. To reach the orchestra level, you need to hang a left and find the stairs or elevator to go down. The balcony is only two rows deep, and the protective barrier in front of the first row is also glass, giving you a view down to the people below as well as to the stage straight ahead.

With so many hard surfaces around, you’d expect the music to be hard, even brittle, but it wasn’t. From my seat in the balcony, I thought the piano sounded bright, yes, but not unpleasant. The instrument’s every nuance was clean and distinct and made you eager to hear a small chamber group. We shall see later in the concert season. 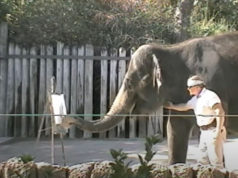